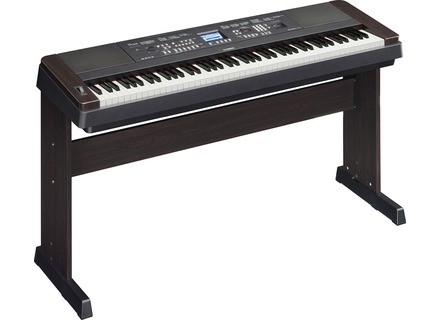 DGX-650, Digital Piano from Yamaha in the DGX series.

Yamaha DGX-650
3
I`ve played on a Yamaha DGX-650 in a music store a while back. I pressed the buttons for for the different instrumental sounds on it. They are a nice portable digital piano to take along. It has lots of instrumental sounds on it. The only thing about it, it doesn`t have any midi jacks on it, in, out, through, which is very rare, that`s the only thing. They ought to put those on them again. But over all it`s a very fun instrument to play on.
Did you find this review helpful?yesno
»

Yamaha DGX-650
4
Piano furniture arranger 88 keys heavy touch GHS Yamaha. Good product overall, I regret only the lack of midi in and out ports on the back of the keyboard. However, it has a "USB to HOST" port for connecting to a computer. It features a fast USB drive and the number of voices, styles and understanding is important. The piano and the sounds of the same style are amazing. His amplification of 2 x 6 watts is more than enough to wake the neighbors. It displays the scores and lyrics (karaoke) on its monochrome screen but does not have video output. Can administer a pedal via a dedicated connection. For this price, I am very satisfied and would recommend to anyone wanting to play with a piano arranger with numerous possibilities without spending too much. It embeds 593 sounds, 195 styles and 106 arrangements. It can add arrangements at will via a key or an external hard drive connected to the USB port on the front, I added 900.

The manual is in French, very explicit and quite complete. Many photos for all descriptions are attached. The touch of this piano is a touch arranger GHS Yamaha. It reminds me of my heavy piano lounge feel. The selection of MIDI channels is very simple and intuitive. In one week, without opening the manual, I basically go around the main functions. Via the port "USB to HOST", it can connect to an iPhone or iPad and have useful applications. It has a sequencer and it is possible to register in various audio formats (midi, audio, ...). It can also receive music from outside via an auxiliary port IN.

This keyboard has many effects and phrases, sounds, styles and accompaniments are quite interesting, I regret that there are not more. Icing on the cake arranger piano has a learning mode, as a teacher at home with three levels of difficulty. The techno and dance styles are particularly realistic but jazz and blues styles are too. I would have added some ...

I use it for a month, I'm delighted and I intend to keep probably a good time. It is easily transportable and has a furniture set with solid screws to position in a room. Before buying it I tried a dozen other models and I took a month to decide. Its design, its heavy touch and the number of arrangements and the possibility of adding via Musicsoft downloader Yamaha France has seduced me, under the bank of sounds and styles they offer. This is an excellent value for money and if it again, I would reiterate that Yamaha DGX 650. In summary, this is a good all-in-one suitable for beginners and experienced amateurs, used at home, in an apartment and on stage.

officialbob5's review (This content has been automatically translated from French)

Yamaha DGX-650
3
Synthesize 5 octaves, external power supply and battery compartments. it has a large music library of over a hundred at least playable instruments.
I do not have the support like the picture.

the touch keyboard similar to that of any other synth, it's suitable for a concert or a studio session.
did not have the manual, I struggled a bit to find features

I received as a gift at the beginning of 2012, I am very happy to use that I have.