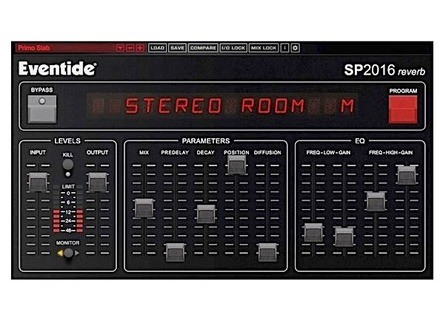 Eventide SP2016 Reverb
5
This overview considers the 2016 Stereo Room, the SP2016 and the Blackhole plug-ins by Eventide, which with its own demo.

2016 Stereo Room
Natural and organic sounding, Eventide’s 2016 Stereo Room set the standard with its unique sound and spin on room reverb. Originally from the SP2016 rackmount, this plug-in offers delay lengths, reflections, and other properties that are truly distinct. The parametric controls are simple and intuitive to achieve various room sizes with unique characteristics (including a control for precise mic placement, diffusion from sharp to rich and dedicated EQ controls). There are plenty of reverb types for guitar, drums, vocals, strings, horns and synth, with some artist presets by Joe Chiccarelli, George Massenburg, and Dave Pensado. All in all, you can get some very lush and subtle sounds, but also cavernous reverbs that almost echo in their feedback.

Overall, I am impressed with the number of great drum reverbs, with each sounding utterly unique and different from the next – and all useable. However, I am equally impressed with how a small boost of reverb from the 2016 Stereo Room plug-in thickens up a guitar tone without it sounding like traditional reverb (the Subtle Stereo and Vocal factor presets are awesome). When used in moderation, the reverb combined with an acoustic guitar sounds utterly life-like – as if you’re sitting in the room listening.


SP2016 Reverb
Developed in 1982, the SP2016 set a standard for its signature and lush reverbs that have been used in several top hits and with top artists. Now available for DAW, you get six distinct reverbs that are some of the most natural sounding in the industry. There are authentic emulations of Room, Stereo Room, and Hi-Density Plate algorithms, each available in two versions: Vintage and Modern. The Vintage algorithms are the same found in the original rack-mount SP2016 version, including bit-depth, whereas the Modern algorithms are brighter, more diffuse, and use a higher bit-depth.

There are many reverbs and versions of each reverb possible with this plug-in, besides all the adjustments possible, but I kept my demo simple by integrating short, medium and long reverbs on synth (and instrument emulations, like flute, violin, sax and choir), a drum track, and electric guitar. As you listen to the demo do keep in mind that I recorded all tracks dry, while adding the SP2016 (which does not swallow much memory and I could apply the plug-in to several individual tracks). What will be obvious is how authentic these reverbs sound, from the early reflections to how the echo density increases with time, but also the smooth decay of the reverb tail. All in all, like other Eventide effects, these reverbs sit so well in a mix that they naturally sound part of the music atmosphere, rather than an added effect.

Besides some basics, including unique reverb for various instruments and voice, there are several presets created by top studio mixing engineers, including Dave Pensado, Richard Devine, Joe Chiccarelli, Sasha, etc. Their creations are based on the parameter control capabilities of the SP2016’s pre-delay, decay, position and diffusion; as well, there is an EQ section that allows for high and low (cut/boost) filtering of the reverb with adjustable filter ranges.

BLACKHOLE
Not your typical reverb, but one of an extraterrestrial nature that defies typical sound effects. If you’re looking for that creepy, eerie and lingering reverb with harmonic tails that places your instrument in a different realm, this plug-in is it. And for that cinematography edge you can’t do much better. It is without question that when I created a demo for the Blackhole plug-in I focused on a cinema-based soundscape – it seemed so obvious a choice.

Although some of the reverb presets are extreme and otherworldly, Blackhole works so well in creating drones and subtle effects that sound utterly real and three-dimensional. And with a host of editing options there’s nothing you cannot do to create that ethereal reverb you always heard in your head, but couldn’t create until now. And so, not only do you get 50 great presets, but there is a ‘Gravity’ control to reverse time and invert the reverb’s decay. There is a Kill Switch so that you hear only the reverb effect. There is a Mix Lock to allow for the scrolling of presets or settings while keeping the wet/dry constant. There’s a Ribbon and Hot Switch that allow for changing any combination of parameters simultaneously. And you can apply Blackhole in mono or stereo. To appreciate its full capabilities, I encourage you to investigate Blackhole with a free limited trial download.