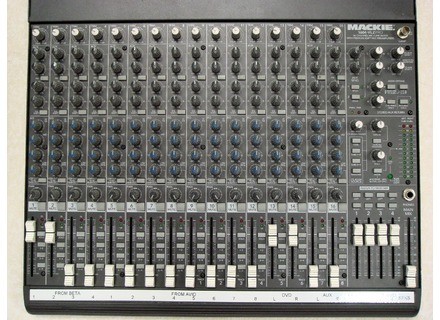 Mackie 1604-VLZ Pro
5
Well I work as a media specialist in Toronto so I got it for free for my birthday because the guys know i what one. So yah i paid nothing.

IT THE BEST MIXER IN THE WORLD RIGHT NOW DUDES

Mackie 1604-VLZ Pro
5
Here is a sixteen channel rackable powerhouse featuring 1/4 inch jacks, XLR jacks and jkust about every combination you can think of is available. there are six aux sends to handle any situation you might come on.

THis mixer is well thoguht out and you should be up and running in no time flat. The manual is great IF you should need it.

The board is amazingly quiet,. even in the studio.

While a lot of people use this board as merely a live sound mixer, there is so much more that this board can do that people often over look it’s ability as a studio board.

It is a full four buss mixer so you have sub-mix capabilities of sending to four discreet locations which is plenty for a modest home studio. Bur wait, there are also up to six aux outs which can act as sub outputs as well for a total of ten discreet outs.

If you have a larger system, you have access to direct outs for channels on through eight (this makes a great direct hook up for live recording, such as to Pro Tools by Digidesign which has eight ins).

The coolest way to hook this up is to run the eight sub outs into an analog to digital converter, such as the Behringer ADA-8000, which will give you eight digital outs via ADAT light pipe and then use four assignable subs and four aux sends to feed the analog input of the Digidesign interface (Digi 001, Digi 002 or Digi 003) which gives you an unbelievable 16 inputs and still leaves you two aux sends for effects and the main stereo buss out for control room monitors. This is ALMOST a dream system for a decent studio, and what is really neat about this is that you can have EQ and effects on ALL sixteen channels.

There are a couple extra outputs like a mono out that can be used to feed a fold back system for the vocalist.

The one minor drawback is that the faders are only sixty millimeters instead of the industry standard one hundred millimeters. But for the several thousand dollars in savings over a “pro” board, I think you can live with the shorter throw faders.

Easy, good qualities, and contrary to the opinion prcdent with pre-amps slightly superiors that new sries (I compar I have a new 1402)
- 16 votes, direct outputs cannal (! 16), mute, 6 to an effective eq etc ..
minimum space for small groups or studio
9/10 for the quality / price (to put 10 must be changed slice budget!)

-a year of use (some live and studio outputs voice complment)
-solidittaille reduced
-9/10
I sell it because I need 14 for use "clubs" if yes it is very reliable and accurate gear
Did you find this review helpful?yesno
»

key-prod's review (This content has been automatically translated from French)

The manual is clear but not essential because the console is easy to use: there is a button for each action, they are firmly attachs, prcis and reliable.
The Pramp are good: The price quality ratio is not bad
it is a good console to record 8 tracks or to go live in 16 tracks.
I just regret the lack of a master XLR.

I do not know what to add, the console is effective and has a good service life ... She has also a reputation to match its performance ...

good quality for money, with the experience, I do it again this choice.
I like the console ...
Did you find this review helpful?yesno
»
Read the 14 user reviews on the Mackie 1604-VLZ Pro »