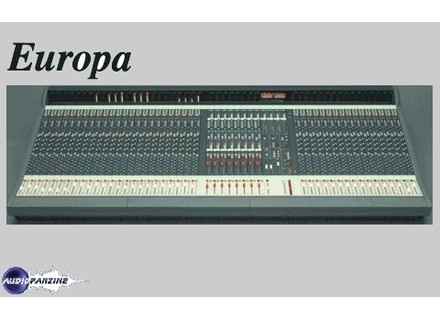 blackle's review (This content has been automatically translated from French)"A heavyweight console."

Soundcraft Europa 40/12/8/8
5
The console has 44 input channels, 12 aux sends per channel, a four-band parametric equalizer, and two filters, a high-pass and low-pass counterpart. Course regarding the EQ and filters, it can be deactivated. A section is the gain control, as well as the tensioning of the phantom and the switche phase inversion and also a switch which selects the input to consider micro or line feed. Then there are ten different bus assignment to the console switches. Namely the eight subgroups and the three main outputs, left, right and mono. The mono output is the summation of the left and right outputs. Below each input modules is of course the straight zippers races logarithmic.
The eight outputs are typically those groups. So much for the input channels .. or rather not .. because I forgot to tell you about a "little" more which is very nice but a genuine "Gate" (noise gate to keep Gaul). Indeed each input module has a section assigned to it * (see chapter use).

On each module subgroup, we find the essential stereo effects returns, so eight in number also, and no less a part of the essential general assistants (eight out of the twelve if you follow). Below each module group, is the eight linear VCA faders.
Before going further, it should be noted that this console is fully modular, and that pulls input and VCA are completely independent mechanically different modules available. This being they are mounted in sets of four .. it is a little simpler than the Five and much simpler than the Midas XL 4 ..
Master modules four in number, include bulk generator, monitoring, zippers mix left, right, and a reminder of the two main warning signals, as well as four auxiliary general missing to reach a total of twelve. In this section you will also find the headphone jack, a microphone input order and keys "Master Mute" and the zipper general VCA. The master section is simple, it is far from Midas XL4 or other dedicated recording studio or mixing console ..

Incoming control levels is performed via a band taking the entire width of the console 50 is approximately 2 meters. Each input channel has a bargraph and led with a fresh response transitional. Understand calibrated VU meter mode. Only the main outputs are entitled to an authentic VU meter needle.

It should be noted that all inputs and outputs of the mixer are balanced inputs on XLR type plugs, inserts are symmetrical, except of course the plug headphones ..

Note: This console (the present), I remember it is totally modular manufacturing has 44 input channels as follows:

40-channel dual mono microphone / line
4 stereo channels with switchable dual mono A / B
bringing its capacity to 88 live inputs, and 44 inputs readily available .. this is not a console "In Line" kind ..

It is also "Custom" type, that several additions were made such as:

The presence of isolates Jensen transformers on all inputs and all main outputs including groups .. The zippers are "OverPress" Penny & Giles VCA and output groups and master. Other zippers are Penny & Giles "standard". All internal wiring has been revised .. and memories of "Mute" were "Midifiées" .. presence of three sheets "Edac" 38 points each.
Another detail of weight .. console weighs 330 kg .. what makes a overweight a good forty pounds compared to the classic version of "base".

Use of this console is simple and baffle anyone. No rotary potentiometer is of the concentric type. A knob, an action. All keys distinguished by a light setting function of a circuit. This allows a glance reading the console. The preview is of type "Solo In Place" with the self-canceling ability, as well as large studio consoles.

On each input the two large stones called "Solo" and "Mute" range are clearly visible due to their relatively bright backlight. Moreover, regarding the assignment cutoff (mute if you prefer) in eight switches in general each control a bus failure. If, for example, a way that bus is connected, the signal is muted by this general order. Now if we take to prevent accidental disconnection, you never know, a safety button inhibits an unexpected break ..

Key "Solo" for its control circuits pre-listening, and Soundcraft to set up a system of "Solo" entirely consistent. The listening therefore, uses a pair of monitor and headphone outputs, two levels, independent, have their instant failure. A key, protected by cover, the solo circuit switches the main outputs. Suffice to say that this protection is essential!
Different assignment select the signal sent to the control circuit when no key "Solo" is active.
Note that the keys solo input circuits are fleeting, it means that the other way hunting and works well solo, but, if you push the button suitable addition, all the ways in which the key has been selected will be added. on the other hand, if you order a solo on one of the multiple outputs, the solo return of input channels is not taken into account .. Of course led specify whether listening is done on an input or output, switching is automatic.

To end monitoring, control paths can be done in "Solo In Place" mode or before adjusting mixture. For the curious among you must remember that this mode is a stereo control a mono input. This means that here we take into account the position of the pan, which allows to position a source in a stereo intensity as practiced in sound. Listening comes then an indication of the level of two indicators: one for stereo to visualize the scale or placement, one for mono.

* Can I Gate Now! : As seen above this console has a noise gate, expander able to play on each input range. Beings can set the standard:
"Threshold" (adjustment of opening of the door threshold) of 10 dB -40 dB
"Attack" (one who plays on the attack of the signal) of 0.05 ms to 100 ms
"Release / Hold" (return time + maintenance) from 0.1 to 4 seconds. There, a little clarification is needed .. This knob actually plays two roles. The holding time of the opening of the door once the party signal is avoided if the signal requires the choice of a relatively high detection threshold, changing the signal drops and the time setting back gain once the holding period ended. It is important, in my opinion remember that time too brief to the disadvantage of making the fall of noticeable noise ..
"Range" is the maximum allowed by the processor attenuation, which is the equivalent of a wedge that would be installed in the opening to maintain a passage; here, so we adjust the signal attenuation when the door is closed. Note that here, the maximum attenuation is of the order of 80/90 dB ..
On each "Gate" on board, it is possible to insert another processor a control signal in the side chain EQ, filter etc. ..

Little treat, each input can insert a dynamics processor or other type of compressor. Like many console you tell me. Whatsoever. Except for the fact that here a key to turn the insert on / off (the insertion is optional, if no device is in place, the key is of course irrelevant) .. better even another key to this integration is: EQ either pre-or post-EQ ..

Well, it is impossible to list them all, and talk about everything, but know that despite its 3289 ** knobs and other buttons and almost as many lights, it remains a simple and perfectly logical approach.

The sound is really up to the reputation of the great Soundcraft consoles. Equalization is both fresh and accurate, which is often contradictory, and it is not at all surprising that the equalizer was borrowed from the legendary 3200 .. corrections are devilishly effective and musical. The preamp cashing unflinchingly strong levels and enough gain to pre-amplify perfect way microphones anemic output voltages (ribbon mic for example).

Also you really apply the gain to more than ¾ of the race, and a good two channels at the same time and with the EQ set so excessively amplified to the highest frequency before hear a slight hiss that can not be distinguished within one meter of a tweeter speaker quality.
Although it is not easy to make accurate comparisons in this area, in terms of sound quality, the Europa seems to be largely in professional high-end analog consoles today. In any case, one thing is certain, performance blithely exceed a Soundcraft K2. And it is also quieter than Midas Legend ..

Intuitive and easy to take control console. Well thought out, access is immediate. Console that requires minimal maintenance. It is also built like a tank. I would rather say that it is not tomorrow the day before she let go. It is not the lightest, sure, but she gets easily manipulated ..
Very complete with a complementary sub-groups of the matrix, the "Mute" and VCA greatly increases the expressive possibilities of the person in front. Its equipment is complete, the many and easily configurable auxiliary, markers are first choice, subtle music to perfection and accurate .. what more?

I will publish this notice as regularly as possible.