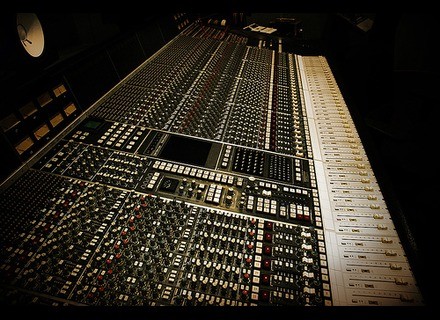 SSL 4000 G + Ultimation
4
Mixer and recording that can be described as legendary, this console offers a lot of features still very popular major studio, including:
A powerful automation, but sometimes for improvement .. (see chapter use).
A high-level equalization.
A simple and efficient routing.
Input modules is as follows:
A first fader can be assigned either to the input signal, either VCA or be assigned to various functions such as management of subordinates "Trims" (in conjunction with suitable knob) but also the management of matrix outputs (there are 32).
Then comes the second fader vested in him back machine, the console is to type "in-line". But unlike the first, it can not be assigned to other duties called routing, as some of Harrison, and I want to say great! In contrast to fader can be assigned to the aux. And can we talk about them they are 6 in number, and one of them is called stereo and "cues" (without comment) and it benefits from the stereo course of a potentiometer Panoramic. All are assigned either "Post Fader" (default) or "Pre-Fader" by particularly strong keys ..
The equalizer on the other hand is relatively simple, and offers a two-band fully parametric bands and two other simpler working in semi-parametric. These bands of EQ can be assigned either to the equalization of the incoming signal (ie a minimum) be inserted into the machine back, and then inserted into the loop detection Compressor / Gate board .. As the ... Amek Neve VR and 9098 .. Then the LF and MF filters that can be input splitter / return, but we unfortunately can not be inserted into the loop detection dynamics processor ... Unlike the two consoles mentioned above, and it is a shame .. Now remember how when the horizon is the popular dynamics processor series 4000G? Including a compressor, peak limiter and a gate that can also play the expander. It can be assigned to the input signal but also to the output signal, and the return machine. Two potentiometers gains independent line and micro levels, with 48 volt power supply control and control of phase inversion for the second pot, and a button called "Flip" for the first one to gain control of the subgroups , and another button called "Sub Gr" as it should be possible to assign to these so-called sub-groups .. Finally to close this chapter, the "Matrix" with 32 possible assignments including the master outputs ..

For now I leave aside the section mistress, as the Amek 9098 i, I edit as and when future uses of these features. But know that all management options are many and varied course present. Monitoring, routing, control etc. ..

Automation called by SSL "ultimate" introduced a dual system (fader / VCA) which provides most, but unfortunately some frustration (see chapter use) in the automation system, however excellent series G. Series J will then be even more effective ..

As I explained in terms of features, found in the console all the features present in other, limiter / gate per, more centralized machine control synchro machines, etc. .. But the only weakness of the 4000G is the sound. Not that it is impossible to do of course. But clearly it was not optimized for that, I explain:
SSL uses a dual system of automation and it can work either with a VCA or with motorized faders and then either by combining the two systems. In fact, we are free to decide which system suits us best and that&#39;s a good thing. But on this console one of the problems of motorized faders on the one hand is the difficulty of "trim" a precise movement in real time. On the other hand, always motorized fader mode, only the audio from the fader, and if you want the console "switch" the audio in the VCA, it is unfortunately impossible to choose the mode fader motorized functions as the "Level Match" with visual and motor common of the two systems (Fader and VCA). It is therefore impossible to work as a kind of "Flying Fader" on this Neve (VR / VRP) and some Amek (9098 I or classical).
Basically even if SSL supports the use of its motorized faders for work registration, non viewing levels by the same joint VCA faders which is a prerequisite for writing important level change, or the automatic from one system to another for a better visual result is impossible! Here! And did not mince words .. This stuff is a real cow-recording!
on the other hand, you can review the course mixes of VCA faders in single player.
Well short of bullying, because you will believe that I have a grudge against this venerable brand. As for the rest, the control layout is perfect. Switches and inverters &#39;important&#39; are of course backlit provisions and leaves nothing to chance. Only the small switch called "statue" (for assigning the fader to gain entry, departures, etc. ..) in the top left of the faders said deserved a firmer touch ..
The routing is excellent and allows for quick work. The visualization is performed on incoming levels of bargraphs with type RTW holds peaks. They are either switchable VU meter or meter peak.
Going back to the automation of this console. The automation of mute is intuitive for quick access, and speed of the mute is 1 / 3 frame. SSL on the other hand on the console offers many options such as, among other excellent "Send automated Matrix" inserted in the console, the unit offers four additional shipments per channel and includes a "computer" time code for automated on / off sending them are very easy to use ..

And although it sounds very well and the console itself. But however it does not reach the "musicality" of other consoles of the same range. Can be blamed a lack of certainty. The equalization spite of its obvious efficiency and high neutrality, which of course is a good thing, unfortunately distills a sound that some might call analytics monolithic view .. It&#39;s definitely not insurmountable but we must know .. After the tastes and colors, it can not be discussed ..

In closing temporarily, it is still a very good console but unfortunately it is not at all versatile. By mixing it remains an excellent choice, but the recording is another matter. Ranges from Neve VR are more "simple" to use and especially much more appropriate recording work. And that&#39;s largely why the Neve VR (48) was chosen instead of a 4000G for a mobile studio well known ..


Ps: I will complete the As the reviews for this console. For it is impossible to say everything at once and especially without the use every day .. So stay tuned!


12 of 12 people found this review helpful