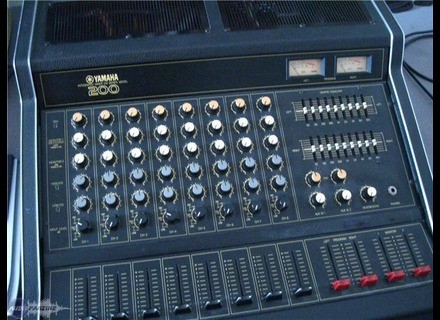 Yamaha EM200
4
The Yamaha EM200 is an eight channel analog mixer suitable for use in the studio or for live sound purposes. I've only used this for recording a few times at a practice space for a band I was working with. They had it on hand for their sound and we used it as a mixer for recording some of their demos before recording in a studio. There are eight preamps with both XLR and 1/4" inputs - one for each of the channels. There are also 1/4" connections for your monitor outputs and all other mixers connections including aux control and the like. It stands as it's own mini mixing board and isn't rackable.

It's been a few years since I used the Yamaha EM200 as I had it hooked up with my Cubase rig at the time and MOTU 896HD audio interface for recording. We were only recording demos so since it was around I thought it would be cool to try to warm up the sound a bit by using a real analog mixer. It wasn't hard at all to operate, although it's good if you do know a bit about analog mixers...

The results we got while recording with the Yamaha EM200 were quite good! It doesn't have the fullest sounding preamps for an analog mixer, but it does sound pretty good and worked well to help warm up the sound for use while replacing the audio interface's preamps. I don't think I'd want to have it around in a studio as a main mixer, but if you've got nothing else it's still cool to have around. The EQ's again aren't great, but will do an okay enough job for simple tone shaping. So while not the cleanest sound mixer, it definitely has a little vibe to it.

I don't think you'll have too much luck finding a Yamaha EM200, as it seems like there aren't too many of these being sold, most likely because this is somewhat unnecessary in the era of digital recording. Still, it's cool for what it is and shouldn't be more than a few hundred (US) dollars if you can find one. It can do most of what a more modern mixer of comparable features can do and looks cool in the process!
Did you find this review helpful?yesno
»