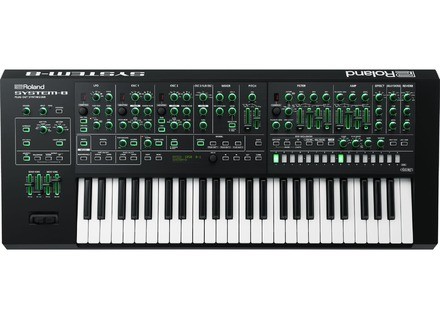 SYSTEM-8, Analog Modeling Synth from Roland in the AIRA series.

View all offers for Roland SYSTEM-8 »

Roland SYSTEM-8
5
As a happy System 8 owner (I bought it soon after its release), here’s a first review after a few months using it.

First, some specs :
- 4-octave keyboard with normal-sized keys and a very good feeling. After owning several other Roland keyboards in the past years (including the FA06, Jupiter 50, V-Synth, VP550 and JD XI), I can affirm the System 8’s ranks high;
- it weighs in at barely over 13 lbs (very slightly under 6kg), but its knobs and control keys are very sturdy – so does the synth seem as a whole;
- comes with the Model System 8 and the Jupiter 8 plus ; the Juno 106 plus has been available since Christmas if you download the latest update, and the fourth slot can take up another plug to be downloaded from Roland’s website (for 75€ apiece) ; - each plug can contain 64 patches – all rewritable;
- an excellent vocoder (but no XLR in, only a classic jack input);
- a 16-pad sequencer which can be used in realtime or step-by-step (TR-like) on a max 64 steps (2x64 in performance mode);
- a very basic arpeggiator on a maximum 2 octaves ;
- maximum polyphony: 8 voices (4x2 in performance mode); it’s still impossible to play poly on mono plugs such as the SH101

- finally, the keyboard’s surface is smooth and uniform, all-aluminium made (unlike the JD Xi/JD XA and FA06/FA08), with a nice white silkscreen printing; the keyboard is rather good-looking when it’s off (that’s for those who don’t like green!).

Factory sounds are Roland classics. Editing is very simple with everything at hand, and sounds can be created very quickly. To carve your own sound, you can start from a preset, from scratch or from a “basic” System 8 sound (which sound like 8-bit video games). Sound exploration is really fun on this keyboard and really all kinds of sounds can be created with punchy leads, fat bass sounds, airy pads, “Jump”-style brass, Vangelis- or J.M. Jarre/Oxygene-like strings and so on. Having 4 different synth types in a same machine is very nive and adds to both pleasure and creativity, especially considering that in performance mode you can combine 2 sounds from different plugs. In performance mode, you can play in either split (and you can even choose the split point) or layer mode.
Anyway, the sound you get from the System 8 is heavily punchy. The first time I put my hands on it, I was impressed by the warmth of the sound – something I hadn’t experienced in a long time.

As for the green LEDs, you can choose to keep them as-is, dim their luminosity or turn them off entirely. Unexpectedly for some, they ARE highly useful: when they’re lit up, they indicate which knobs/faders can be used:
- on the System 8, all LEDs are on
- on the Jupiter 8 and Juno 106, almost all of them are;
- but on the SH101, many less are on, especially that for the 2nd oscillator as the original model only had one. This avoids turning some knobs to no avail.

Regarding the editing of parameters, all is available on the front and it’s very complete. Without getting too much into details, you have 2 oscillators (plus a 3rd one that can be used as a Sub Osc), 1 LFO, 1 filter, and 1 effect (distorsion/saturation/metal/fuzz/crusher/phaser) can be assigned with 1 delay/chorus and 1 reverb.

Overall
The System 8 is a nice and playful synth. Editing is simple for people like me who are no sound designers, and you really enjoy playing it.
Of course it also has its cons:
- limited polyphony in performance mode: if you play a mono sound on the left side and poly on the right one, you’re limited to 4 voices per part instead of 1/7;
- not enough memory slots (256 as a whole for 4 models)
- no XLR in for the mic
- when you save a performance, the patch’s settings are not saved, except if you also save the patches.

However, for those who are reluctant to anything computer-based and can’t afford a real Jupiter 8, Juno 106 and SH (or who don’t want to invest into the Boutique range), the System 8 is an excellent, very punchy VA synth. It’s a 4-in-1 synth, or even a 6-in-1 if you take its 2x64 step sequencer and very good vocoder into account.

I’m now dreaming of a VP330 plug (why not considering there is a Boutique version of it ?). Anyway, this is a synth that I love and a real keeper which makes both playing and creating very pleasant.
Did you find this review helpful?yesno
»

Listen to the 49 audio files about Roland SYSTEM-8 »

Roland SYSTEM-8 manuals and other files