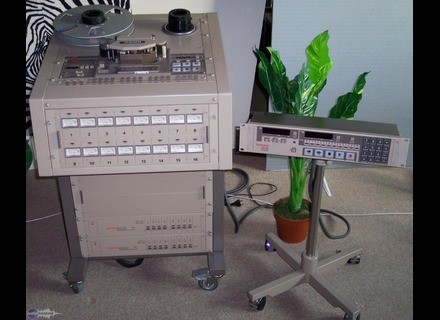 Tascam MS16
5
The Tascam MS16 is a 1" 16 track tape machine. I'm not sure the exact years that this was in production, but I think it was made in the early 1990's. I only recently got the chance to use the MS-16 as I'm working with a new producer and he has this in his studio. We used it to record drums only on and then bounced it into Pro Tools, which is probably the common usage for the machine these days for those that are still around and being used. I don't know much more backing information on the MS-16, but it's a pretty small machine and fits nicely in any studio. It also has it's own remote which is thorough and makes it so you only have to go to the machine to put the tape on and take the tape off. I really like the sound of this machine as I think it gives you just the right amount of warmth for your tracks. It probably doesn't sound as thick as as a 2" machine, but since it's a 16 track it's pretty close and still sounds great in my opinion. Since drums are the only instrument that I've thus far used with Tascam MS16, I'm looking forward to trying it with other instruments like bass and electric guitars. The price seems to be varied for the Tascam MS-16, but it does seem like there are some out there for sale on the used market at a decent price for a 16 track tape machine. I really like the ease of use with the Tascam MS16 and definitely it's sound, I'm looking forward to having the opportunity to use this machine more and find out more about it. From what I know so far, it's definitely a cool little 16 track.

Tascam MS16
5
The Tascam MS-16 is a 16 track multitrack recorder on 1" tape. It is generally set up for Quantegy 456, which is bias compatible with RMGI (Emtec) SM 911, which is still being produced, unliked the 456. The machine can also be rebiased and set for other higher output tapes. Mine is calibrated for Quantegy GP9, meaning that at such a high recording level there is very little tape hiss. Optionally, dbx Type I noise reduction can be used, but that is an added feature. On the subject of additional features, there are many, including two different types of remote controls, a custom Tascam designed rack, and synchronization equipment. I have synchronized the MS-16 but only as master. I've read about recordists who have slaved the MS-16, but I have no experience in this regard. Most of the machines are set up at 15 ips, although some machines have been modified or originally factory set for 30 ips. I own the 15 ips version.

The machine is across two relatively heavy components, connected by a data cable: there is a the transport, which is similar in size to an MSR-24, and a box that contains the computer cards for each of its 16 tracks. These two components can be connected, if placed on a table, or separated if placed within the Tascam MS-16 rack.

A 1" 16 track is the equivalent of a 2" 32, which doesn't actually exist, but isn't much narrower than the tape width of a 2" 24 track, which is a standard of professional recording studios. The MS-16 is digitally controlled, so automated punch-ins are possible, as well as return to zero. It also has three heads, which allows for monitoring from tape, which can be really helpful when dialing in just enough mixer gain to achieve the right amount of tape compression for the snare drum and toms.

This machine is capable of producing some excellent sounding recordings. I know there are a lot of people that will say it can't come close to achieving the recordings made on a 2" Studer, and while there is some truth to this, that doesn't mean that this machine is a powerful tool for a knowledgeable recordist. The recordings it makes are very smooth. I previously owned a TSR-8 and an MSR-16 and think this is a much better sounding recorder. I know in terms of track width and tape speed the TSR-8 is identical to the MS-16, but that's just what my ears tell me. It is a relatively simple machine to use, but when it comes to overdubbing, do to the three head design, it is slightly more complicated than using a TSR-8 or an MSR-16, but still not difficult to figure out.

In terms of quality control, the biggest issue with this machine is the computer cards. Sometimes cards may stop working, in which case reseating the card usually will get things running again. As a precaution, I would recommend anyone who acquires one of these machines to also track down some extra computer cards in case something goes wrong, so as to not interrupt the recording process. It is direct drive, meaning there aren't any issues with a capstan belt.

I really like this machine, which is now my main recorder alongside an IZ Corporation RADAR V. I don't anticipate getting another multitrack analog recorder in the near future, and I hope this machine will continue to be in service for years to come.