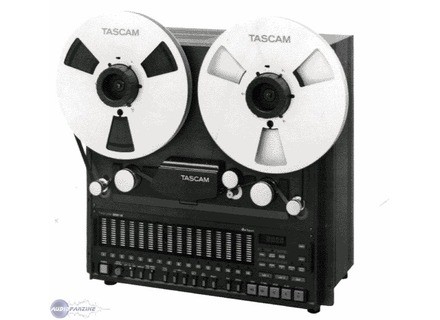 My two MSR-16's had dbx Type I noise reduction which is mandatory to producing clear, hiss free recordings. Some claim that the MSR-16s, which came with Dolby SR noise reduction is superior to the dbx, but I have not used any of those machines. The dbx can be switched on and off on tracks 1-8 and 9-16, and can be outright disabled on track 16 solely, for the purposes of SMPTE and MTC striping. There is also an Accessory 2 jack to use a device such as the Tascam MIDIizer to synchronize another MSR-16, the MSR-24, the TSR-8, or the 238 or 688. In addition, there is a remote control available for this machine that uses a standard serial cable. Although I can't remember which cable it uses exactly, a normal male to female extender cable with the same number of pins can be used to place the remote control in a separate room and will operate just fine. This standard cable can be ordered through the Amazon marketplace, which is where I acquired mine.

Down to brass tacks: The MSR-16 makes excellent quality recordings. Personally, I think the recordings are as good as the ones I made on the TSR-8 I owned for a short time, but with the benefit of an additional 8 tracks. This is a powerful machine, particularly when combined with a DAW for added tracks. In the time I owned two (one at my band's studio, the other in my home studio) I was able to easily take tapes recorded on one machine and bring them for playback, overdubs, and mixdowns on the other machine with ease. The recordings are crisp and clear, but if you want even crisper recordings uses higher bias tape (for which the machine is underbiased) such as RMGI SM 900. This may put more wear on the machine, but I was satisfied with the results this achieved.

This is a narrow track machine, so don't expect to be able to get a lot of tape compression out of it, especially since the dbx is pretty much mandatory to use and compensates for it anyway. If you ever need to bounce tracks it will do it seemlessly, and I'll think you'll be impressed with the results. During the one time I bounced a track, I bounced it three times, adding more and more effect each time, and the loss of quality, due in part to the excellent onboard dbx, was indiscernible, particularly within the mix.

I really enjoyed this machine, but after a few years opted for the larger track width of the Tascam MS-16. I still wish I had it around, but it was time to clear some space.

zeepo's review (This content has been automatically translated from French)

Tascam MSR 16
5
Good overall dynamics for a 16-track analog 1 / 2 ". The dbx allows to increase the momentum. A good product, reliable and tough. The major weak point is the fragility of the nuclei are nab plastic is getting older poorly.

Léo 2003's review (This content has been automatically translated from French)

- His side: Alieh with its cabin and a small studio, live recordings gave an impression of "the merging". Homogeneity incredible. The color of a drum or guitar was really nice. There I found the sound of great albums.
For cons, the songs are perhaps a little more clear on digital.
- Technology Side: This is the latest generation of magneto analog Tascam, the more mature, the most successful. Dbx integrated. The capstan servo is controlled, ie by adding a box-type synchro MTS1000, we can make MSR16 slave to a host of other machines of all brands (pro recorders, magneto digital, analog computers )

Before? Although I had the small Fostex 4-track, an 8-track Tascam 38, Tascam TSR8 (super machine that too) ...

I would do if this choice? Of course!
Musicality, natural compression, heat, signal noise: 104dB, never saturation, reliability, subjective feeling very pleasant. A friend told me: "When you listen to a mix that, we settle, relax, no one is listening
... digital I always have a sense of dissatisfaction, I readjusted, I Trifouille, I change ... "
The least?
It is in my opinion, it takes place and any configuration to operate such machine ... space to accommodate a table 32 tracks, as for devices, a cabin and a separate studio ... A table that honors such a machine.
If not for the model home (which is my case now), it is cumbersome and disproportionate. It is not suitable for mounting either.
But to make a group sound ... then there is paradise.
... I still miss him.

Tascam MSR 16 manuals and other files