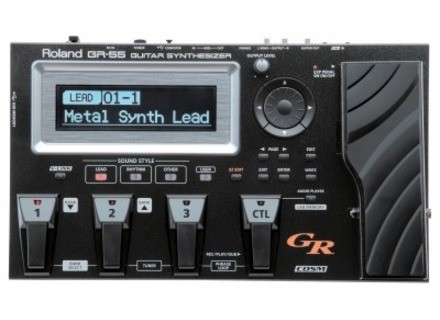 GR-55S, Audio/MIDI Converter from Roland in the GR series.

View all offers for Roland GR-55S »

Roland GR-55S
1
Pedal supposed to convert your synth bass and without latency .. unfortunately this is not true and the low latency is presents and makes the pedal unusable for any type of srieux game.

In addition, the more you will make more low notes latency will be.

To hide this mix Roland sounds by incorporating the raw sound of your bass .. (to believe that there is no latency correctly) so the idiots will say that there is not a car when you have no ear and that we play on Sunday after noon password ..

The Representative Mr Mulot sells the machine without latency .. it's just a scam. A friend is in discussion with the central European sales director Roland Anthony Reig it ..
(Mr Reig having affirmed that Roland had never sold the machine as having no latency, that only Mr Mulot had done and that his remarks were his responsibility Entire)

In short, you're a rich galore and you want to run the Chinese economy? this product is for you!

For the rest I would say:
- Sounds of another era, horrible my ears, the low cost climax
- Roland design: pedal correct although it feels that there is nothing the inside; horrible plastic microphones. (If you like with good microphones EMG bartolini or you will make the head when you'll hear the microphone you want to do you ask)

The only clear thing is that we want your money.

Installation difficult as well ask for the microphone you should use the screws .. which will leave your bass indlbiles marks a time you want to sell it ..

He will test for almost 2 months that we did not understand why there was the latency (since we had a minimum for Credit for Mr Mulot at that time)
Then we touch Mr Reig for confirmation.

marcanger's review (This content has been automatically translated from French)" can do everything but ...."

all is well when the philosophy of device is freelancing

can be lack of Possibiltés routing the output to see the vg 99 was sharper the above
lack a normal guitar input (there were about 99 vg) but a good chtite welding in the box and it adds so no problem in case AC can be used,

I said not good that it's the best but for all the possibilities of his bah it's worth
for Baluchard it makes the case you need to go fast in a directory without changing instrument c coolest synth ca relieves the keyboard makes the octopus of both these synths, hop it passes an acoustic guitar intro and voice we finished with a gibsonnien her to play acdc just after sound strat to play a dire strait and if the bassist crowd finger can do it too

tobias47's review (This content has been automatically translated from French)

yes, quite simple. But as always vau better read the instructions for accuracy. virtually no latency or not at all.

excellent value for money, I love the sounds of acoustic guitar, its the GR 300. you're a fan of the Pat Metheny ... go for it.

4 of 15 people found this review helpful

Roland GR-55S
5
The format is very small. Be careful not to have bits of shoe too wide. Easily transportable, it does not take much space.
In terms of connectivity it's pretty simple, manufacturing looks very solid.
the volume pedal is a bit small. I regret that no more than three notes by banks. Can be assigned to the key CTL just what you want and it's convenient. It is the same for the volume pedal.

The general configuration is very simple. the manual is a bit light but well-digging in the menus can be found pretty much what you want.
The usual functions are very accessible.

The installation of the GK3 me some problems. I wanted to install it on my American Start 1991, but the microphone of the GK3 is too thick. I would have had to cut the picguard I get high, and even a little cash. so I mounted my PRS somewhat against American heart. Did not want to break my table in my PRS, I used the double face that has not held over three days, I had to put some super glue and so far it fits well. The curvature of the micro is not identical to the curvature of the handle so I paid the 1 mm on the strings and re ground.
The start was made very quickly, setting the microphone is simple. I tested this all sounds on offer. The manual was clear on these points

This is the first time I buy a guitar synth. I wanted the sounds of Pat Metheny and here I am fulfilled. I spent quite some time to find them. Then I set a lot of different sounds because I play in a group of jazz-rock fusion.
The models are incredible if you take the time to address the sensitivities of strings and many parameters present. Some sounds just hang but I managed anyway playing on the sensibilities that they are stable. the game on the sounds of saxophones, trumpets and organ must be very precise. a hitch and we get a parasite. The piano sounds are great but we also need to tamper with the settings if it's a little anything. not hesitate to operate or dispose of PCM1 and the Chromatics PCM2.
The modeling of microphones and amplifiers are quite compelling and contrary to a user, I put my Vox ToneLab because I find everything I want with the GR55. In general, I was not satisfied with the change of Speakers compared to original and found that the positioning of microphones is a little gadget useless. may be I'm not good enough to see the difference.
I created my own sounds easy but beware the order of PCM1 and PCM2. If you see it pick up, reverse and it will be much better.
At the level of difficulty, I have not figured out how to operate the PCM1 and PCM2 simultaneously if the preset is not provided with two example. I am therefore forced to select another preset that contains the two if not the backup, it does not take into account the two.
The volume pedal is badly étalonnée.pour volumes to the effects on a piece of Jeff Beck, it's difficult.
The sound throughout is excellent.
Finally, I was really pleasantly surprised. It's been barely a month that I have and have fun like crazy. I still spend the hours and hours on it before you see results. I recommend it to everyone because at it's top value for money.
thank you for reading.

26 of 29 people found this review helpful

Did you find this review helpful?yesno
»
Read the 7 user reviews on the Roland GR-55S »

Published on 03/11/11
Roland announced the release of the GR-55 Guitar Synthesizer, combining PCM synthesis with digital instrument modeling from the VG-99 V-Guitar System.

Roland GR-55S manuals and other files