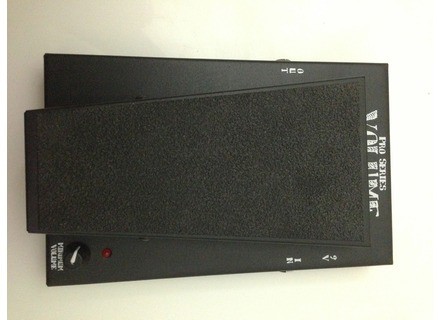 Morley Pro Series Volume
4
This is just your basic volume pedal. As far as those go, it's pretty good. It's analog, old-school and to the point. Nothing extra thrown in but that's how I like it. Nothing in the way of midi or audio/outs.

It's easy to set up and easy to use. It's a big pedal, and it's pretty awkward to carry around, but if that's not a problem for you then it won't matter. I personally don't like to drag big pedals around very much, so I have a hard time with that. There's not much need for a manual but If you must consult it, the manual lays everything out pretty well. It's easy to grasp. At one point I had an issue with the pedal where it wouldn't go to full volume, but I looked inside and noticed that the runner was loose and that I simply needed to tighten it. I tightened it a little too much, but then went back and fixed it and it worked fine.

I generally like the sound I get out of it. It doesn't really rob you of clarity when it's working at half-strength or lower, like some other volume pedals tend to do. I use it with my '67 Strat and my Fender Deluxe Reverb and it works great. Sometimes that amp really cooks and you need to ease it back, and this pedal is good for doing that without making it sound muddy and unclear.

There are certainly better-sounding pedals out there but they tend to be more expensive. In my honest opinion, unless you have a large budget or are a pro, there's no real need for anything that much better. I've never had a problem in the 4 years that I've had it. I think that I lucked out finding a used one for really cheap, but even then, new ones aren't too pricey. I tried some other models and I liked them, but not as much as this, and this being used, it ended up being cheaper. I ultimately believe I made the right choice. Now, I'd probably shop around a little bit more and see what else is out there. I'm sure there's something better, but I don't regret this purchase at all.
Did you find this review helpful?yesno
»

Drboissansoif!'s review (This content has been automatically translated from French)

This is a volume pedal, is nothing complicated though.

It does not dnature the sounds ... At the same time, I do not see how it could ...
It does not eat the same signal in the high position

This is where a plot thickens .. What I expect from a volume pedal is that it is able to completely turn off the volume; l was not the case, even in low zero knob, bein a password ...
So for those who want to manage volume between rhythm and solos, it is perfect.
The rest is not worth anything ... and I pse my words ..
It is unfortunate when even not be able to do a ..
I stay on my ernie ball ..
You not tell me it's because I play on active pickups on liabilities, it is the same thing ..
Buy OCCAZ a friend (50) it is on a report by ernie ball the price is not the same ... But ernie ball does its job ...
I'll turn it back into expression pedal to control a whammy-4
Did you find this review helpful?yesno
»

Crapy-jr's review (This content has been automatically translated from French)

Morley Pro Series Volume
4
PDAL of optical cell volume (no knob who fouled under the pedals)
SETTING THE knob of a minimum volume,
PSU on 9v battery or transformer

Very easy to use, a knob argler, Souvant max and vroom-vroom we do with the pedals

His point of view it does not dnature indicates position max
and has the same effect on harmonic distortion and the volume of knob scratches during the race,
rponse linear ffective in "violing"
a minimum level adjustable allowing the passage of a rhythmic sounds using a lead sound that emerges from the mix without much map of Sonora and dynamics between the two
The small catch is that there is a break lgre sometimes audible when the RULES to mute the sound turned up

I have the pedals for a good ten years,
it is a robust evidence (not a single problem since I) notte thanks to its optical cell.
This is not the pedals I use most, but when I need it rpond always "present" with the same reliability and quality.

Lopsided's review (This content has been automatically translated from French)

Morley Pro Series Volume
4
Volume pedals, analog. Entrance, exit for a knob rgler the minimum open position.
The pedals are not too big (for volume pedals, we understand) and looks pretty solid.
Technology ... A photosensitive cell instead of a knob crmaillre. This is a cool flash is class, but the problem is that demand has power! Finally must be no dog is a dtail.

Note: mine does not look like the poster here. It is not beautiful inscription MORLEY orange / red and Pro Series Volume which class in italics. Too bad.

Using a volume pedals ... Anyone can use it.
Ah, yes, something a little boring: the pedals compltement farm (drives) is not perpendicular to its base, but dips slightly forward. It's pretty boring at the ankle if you play sitting down. Standing has to go.

The pedals have a race long enough, it's cool.
However, it has a big default: when you put it in the open position (up) with the minimum volume knob above 40%, we have the right a nice breath. It was t the drama of my life, I became anorexic and manic dpressif, I cut all ties with my family and friends, I left my wife, you my dog , spray the window with my kid, started taking drugs, sniffing glue or UHU tipp-ex, to inject the cream fraiche intravenous ... Then I ended up buying a Boss to replace it and everything is back to normal.

I have used for a month before falling on its replaceable: a Boss FV-300H.
It could have been be a great love story, but it was too much default. Dj food aptait ass, but then the breath ... L c'tait really abuse especially considering the price I pay, or (new)! In addition, I opened it to see a o could come and blow sr origin is used in optical technology (y'avait nothing in any Manir ...).
I had not tried other volume pedals before, I took one that seemed to be the best qualitprix. Too bad.
With exprience Obviously I'd better not elect a deuxime time. For someone who wants a solid volume pedals, with a good race and not too big, to make violoning or mutate its sound between songs, she is very well, but if you want to use it rgler for your win, forget it.

Other Morley volume Pedals for Guitar/Bass