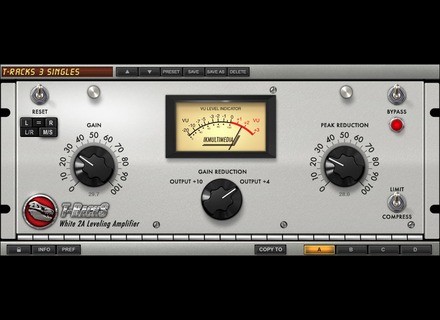 From 1176 to LA2A The (almost) simultaneous launch of the 1176 and LA2A software versions by IK Multimedia and Native Instruments is a good opportunity to make a quick comparison. Let’s go! Read more…

madchap's review (This content has been automatically translated from French)" it's good!"

IK Multimedia T-RackS White 2A Leveling Amplifier
5
pass the authorization is a bit heavy is OK ...

RAS with a new machine .. Uses several DAW with Sonar X1 and X2, Reaper, Fruity loops in particular. No problem.

This is an opto compressor (the real one!) That has among other settings not attack, or ratio of release, so it's sometimes a bit annoying for something specific! On the other hand, this is what gives it its sound character and it makes it very simple to set up and use!
the meter is a little slow to make changes so do not trust him too ... anyway, better to use his ears as his eyes when we compress! There is a fashion Mid / Side (MS) which is very useful for the battery.

Overall this is a compressor that sounds pretty sweet though almost always pushing hard enough and it causes one side a little hot ("smooth") in its which can be nice on vocals or instruments such as bass or acoustic.

And, despite some "gaps" stated above, this is a good compressor has its own character and all models that emulates 2A is musically it is one that catches me the most, even if there was not a huge difference ... it is most important to me. hence my choice.