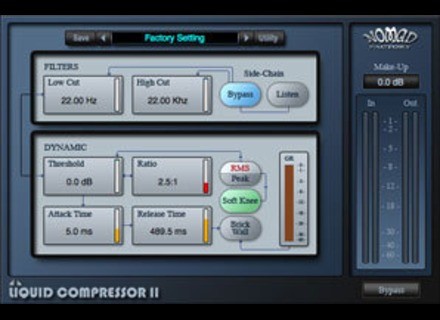 Nomad Factory Liquid Compressor II
4
The Nomad Factory Liquid Compressor II is a plug-in from the Nomad Factory Liquid Bundle. The bundle consists of six plug-ins in total and is compatible with both Mac and PC operating systems, as well as in RTAS, VST, and AU formats. I don't own the Liquid Bundle, so I wasn't the one to install this software. Learning how to use it however, is really simple, especially if you know how to use compressors in general. The main compression section of the plug-in gives you parameters for threshold, ratio, attack, and release, which is a pretty standard configuration. It also gives you the choice of using it in either RMS or peak mode, as well as soft knee or as a brick wall limiter. The plug-in then has a side chain filter section with both high and low pass filters. That's everything that you'll find in the Liquid Compressor, so as I said if you understand the basics with compressors, you'll be all set. A manual shouldn't be necessary for most users...

The system that we're running hte Nomad Factory Liquid Compressor II on at the studio where I work is a Pro Tools HD system. We've actually got it on a few different Pro Tools HD systems, but the main one has a Mac Pro computer with 10 GB of RAM and dual 2.66 Ghz Intel Xeon processors to go along with a vintage Neve console, Apogee converters, and Barefoot monitors. We never have problems running plug-ins on any of our systems, and this one doesn't seem like it would take up too much processing power anyway...

While not my favorite compressor plug-in out there by a long shot, the Nomad Factory Liquid Compressor II can definitely be useful. The Liquid bundle in general is a great deal as you get six plug-ins of different variety for just $150 US dollars. From using the plug-in here and there at the studio, I've found it to be right around average for a compression plug-in. It doesn't sound bad at all, but lacks a certain presence and fullness that you get with a hardware compressor or a higher quality plug-in. I guess what I would say is that you can definitely tell it's a plug-in, which may or may not be harmful to you depending on how you look at it. The bundle as a whole is definitely worth checking out if you're looking to get some pretty good plug-ins on the cheap...