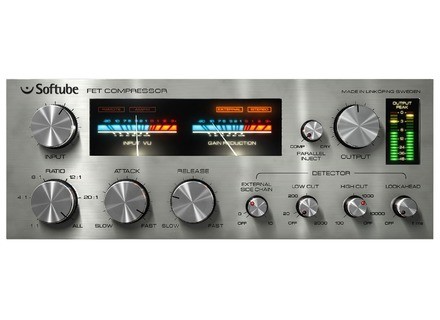 Softube FET Compressor
5
I haven't had any compatibility issues , the program works on any platform Windows XP, Windows Seven or MAC OS.

The book provided with the program was well detailed , all the information that was important to the product itself was there and you could get a wide understanding of it.

General configuration and setup is easy and doesn't require a lot of effort to get the results done.

The Software works correctly without any types of errors or mistakes , also the gear and configuration is very stable , this compressor is a very powerful one that has an old style touch to it.

I'm getting pro performances with it , I use it mainly on my vocal tracks or even or on my lead tracks.

I've been using this compressor for about 5 months now , but the weight of it , the impact it has on final mixes is huge.

What I like most about this compressor , is the effect it has on the layer itself , it has a powerful attack , you can side-chained to another or the same track , you can build nice parallel injection.

Another great thing about this product is the detector , which is basically an build in eq , that is quite useful to sculpture the frequency range.

I like the analog feel that this compressor makes , it has a vintage type of touch , it sounds big , wide , and yet very compact and pro.

My opinion about the value of price is awesome , I really think this is probably one of the best compressors that are digital yet are very alike to the old compressors.

Precision and quality of the sound is perfect , there is really nothing to complain about , I would rate 10/10.

Yes , I would buy this product over and over again.

Softube FET Compressor
5
The Softube FET Compressor was a quick install as it was the same process as most plug-ins that I have installed before.  I didn't experience any compatibility issues or any other problems as everything went smoothly and I had the plug-in up and running in Pro Tools rather quickly.  The interface of the plug-in is easy to follow as it has pretty basic parameters including knobs for input, ratio, attack, release, parallel inject, and output.  It also has a 'detector' section that has parameters for external side chain, low cut, high cut, and look ahead.  The plug-in also has metering for both input level and gain reduction.  Unless you are having trouble installing this plug-in I don't think that the manual is necessary since it is easy to figure out on its own.

So far I haven't experienced any sort of lag or performance problems with the Softube FET Compressor plug-in.  I am currently running it on a Mac Book Pro that has a 2.2 Ghz Intel Core 2 Duo processor and 4 GB of RAM and I run the plug-in in Pro Tools LE 7.4 that runs with a Digi 002R audio interface or an Mbox Micro depending on where I am.  I'm able to run a few of these at a time within this configuration without any issues, and can't speak about using it beyond this amount as I've never needed to.  As long as you have a pretty reliable system that you are currently able to run some plug-ins on, I don't think that you'll have an issues running this plug-in.

While it is definitely nice not to have to worry about installation or performance issues, the main reason I enjoy using Softube's FET Compressor plug-in is because of the sound quality.  It has a much thicker sound that most software compressors out there that I have used and I've found it useful in a variety of situations including for vocals, drums, and guitars.  The price of this plug-in isn't all that cheap but at the same time it isn't expensive either.  If you are looking for a reasonably priced compressor that doesn't sound too digital like all the rest of them, definitely look into trying this plug-in.

Published on 06/09/15
Softube is offering a 40% discount of a selection of plug-ins and Rack Extensions.