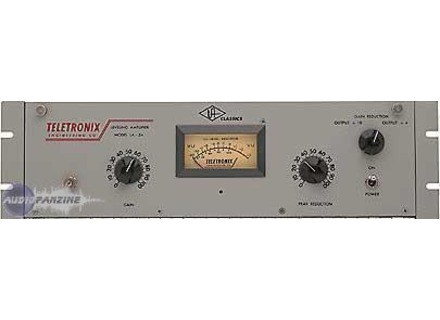 Viguier's review (This content has been automatically translated from French)" Very very good, but not all styles ..."

Universal Audio Teletronix LA2-A Plug-in
5
Installation almost instantaneous: you pay at the site, you double click a small file downloaded in less than a second and that's all ...
Not really need a manual, but some tips are hidden

Pentium 4 PC with 3 gigs of RAM, card Soundscape Mixpander 9 (a monster too).
And a single UAD-1 for now

For instance the number of card, look at the new site of Universal Audio (in addition, it depends on the type of card being used ...).
STABLE is used on the SSL V5.5 and V6 Sounscape, no worries! Not a single crash (and I use this software for 3-4 years, NEVER any crash ...).

It stains really not bad, it smells like vintage (virtual way, there is much agreement!), Everything that happens it finds slightly thickened, sometimes it's good, sometimes it's not well: )
I just finished an album of metal, and I do NOT use this plug. Instead, I ended up also an album of Rock "Vintage", it ran on almost every title, with the Fairchild ...

The sound is less transparent and less "round" and through the plug LA3A (I prefer to compare with other plugs instead of hardware ...). Is more "creamy", do not abuse it I think ...
It is on vocals, guitars, and overhead, snare, ....

Very good plug, and once again, makes you want to buy the rack hardware, will have to save