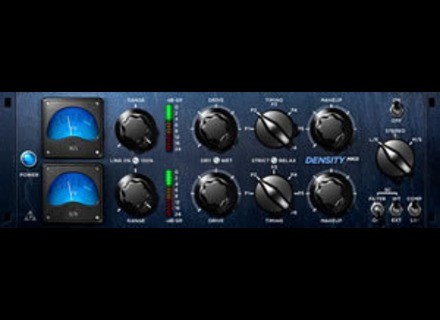 Variety Of Sound Density mkII
5
Density MKII came out around the summer of 2009 and I have been using it every since. The plug in is very easy to use and to understand. There is only one main interface for the plug in that has all of you the controls on it like, drive, dry/wet, “makeup” and a few others. It is a very good stereo bus dynamic processor. The manual is very easy to understand, I had to use it several times for all of the timing specifications. It too me a while to understand and work with the timing presets that are on Density MKII. Density MKII seems to be in a class of its own when I compared it to other similar style plug ins. It is one of the better mastering compressors that I have seen on the freeware side of things.

The software is very stable, it has crashed my Cubase one time, but other than that it worked great in Cubase and FL Studio. I have been using it for 3 years now and still use it. I have not received any updates for it and I don’t think they came out with any.

It can be downloaded for free now online, you have nothing to lose. It will probably end up being your master compressor for your sessions. Even though it’s a freeware you will still get a high performance out of it. The sound is very clean. There are many things that I can do with Density MII and sometimes a sound that I can get, that I couldn’t get using Waves SSL. Waves SSL was not free and cost a good amount of money and I have managed to get a better sound out of Density MKII. Density MKII is the best freeware compressor that has came out. It is 100 percent worth the free download. Download it now!

Terch's review (This content has been automatically translated from French)

Variety Of Sound Density mkII
5
Installation nickel: a dll in the vst folder.

The general pattern is clear, however, we must read the instruction "manual to master the complete compressor. The downside: too much to want to do in the GUI" vintage ", we are left with some tiny adjustments (cf knob" Dry / Wet "and knob" Strict / Relax "). But the plug is much clearer and more intuitive than the version 1.

I'm working on a Quad Q9550, so no worries on that side, the plug is fully optimized SSE.

No Plantade to indicate, however, since I use half a day. But as I am (was) a big user of version 1 of Density and this one has never crashed, I hope that this new version will be stable.

I use a lot of freeware compression, including versions of UAD, Waves, Flow, etc.. So I think the top of the basket.

This app is very inspired by the legendary compressor vintage "Fairchild", as it is a real "glue" to the mix. The sound quality is amazing, nothing to envy the UAD version. It goes even further in the effects of cutbacks: be careful with dosages if you do not want to bind a mix too, and by the same token, the gun down.

I was looking for an alternative version UAD Fairchild does not suit me so much, and there, I found. And with this version mkII, the sound quality is to go.
This plug is a killer, one of my references. And with all its features (parallel compression, compression M / S), it makes it ultra versatile compressor, which is difficult to handle, but once understood it becomes a formidable weapon.

Large publishers have the trouble to do because it's freeware ...
Did you find this review helpful?yesno
»

Other Variety Of Sound software compressors