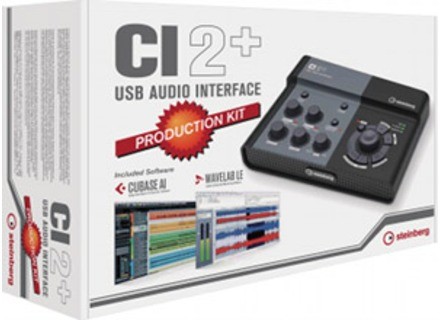 Steinberg CI2+ Production Kit
5
The pack includes the CI2+ interface plus Cubase Ai 6 and Wavelab 7+.
It allows you to record demos, be it audio (+VST) or midi (+VSTi) for a very affordable price. There's no need to get the "Extreme Pack" from Steinberg.

I switched later to Cubase Element 7 for only 39 euros. I got other VSTis, including Groove Agent One and Prologue.

It's a breeze to learn how to use it. The pdf manuals are pretty clear and the CI2+ interface works perfectly.

You can install the program as 32 or 64-bit version, on PC and MAC.
Did you find this review helpful?yesno
»

Steinberg CI2+ Production Kit
5
I've been using it for three years.
Very effective, compact, the xlr/jack inputs are very practical.
The MIDI controller is very handy.
Sober and discreet design.
I'm very satisfied with it.
Weak point: The inputs are on the rear. So sometimes you have to grope to makes connections.
I bought it as part of a computer/soundcard/speakers/Cubase Artist 6 bundle for $850.
Did you find this review helpful?yesno
»