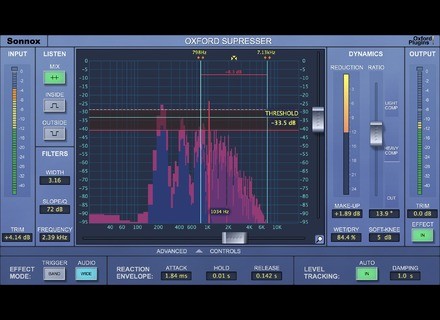 Sonnox Oxford SuprEsser
5
Sonnox's Oxford SuprEsser is an advanced de-esser plug-in that goes way beyond the control available with your standard de-esser. However, it has both a basic and advanced mode, making it easy to do quick jobs and also giving you options when you might need them. I wasn't involved at all with the installation of the plug-in, as I don't own it and have only used it in a professional studio where it was already installed and ready for use. The interface of the plug-in has a wide array of parameters and a graph to show you where you are at within the frequency spectrum. It contains sections for dynamics, listen, filters, and both input and output monitoring and leveling. Since this isn't your typical de-esser plug-in, having the manual around is a good idea in general, especially if you're looking to learn all the features available with the SuprEsser.

I have run the Sonnox Oxford SuprEsser plug-in in a Pro Tools HD context, so I didn't have any problems at all running it. I don't think that I've ever had a need to run more than two of these plug-ins simultaneously anyway, and if you're going to need that I would recommend printing your tracks anyway. I can't really say how well this would run on your LE based system, as it just depends on your configuration.

To date, the Sonnox Oxford SuprEsser is the most in depth de-esser I've seen. I don't have it in my home system, although I wish I did as it can do more and sounds better than the de-essers I have right now. While perhaps not the most pressing plug-in need, having a great de-esser can really pay off, especially one like this where you can get really specific with what you're doing. While certainly more expensive than just about any other plug-in out there like this, it also can do a whole lot more. If you're someone who is looking for an advanced de-esser, look no further than Sonnox's Oxford SuprEsser.
Did you find this review helpful?yesno
»