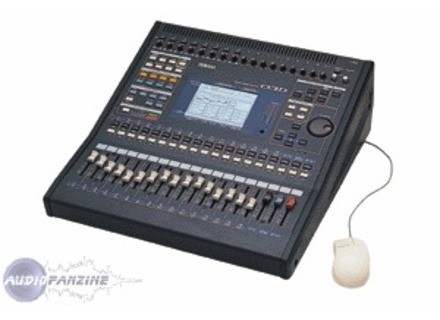 Magnificent! Great! Incredible! Supernatural! Demonic! ... This is an excellent digital mixer. Impeccable sound quality, dynamic treatments of some very serious internal effects, of a very good quality. The only criticism I can make is the lack of analog inputs (16 +2), the limitation to 8 outputs direct digital and also the lack of return for Aux outputs.

The answer to these reproaches is called 02R Version 2, but costs twice as much. The 03D is the SSL for the poor!

The MIDI capabilities of the beast: The 03D has a mode called MIDI Remote: it allows control of MIDI devices from the 03D. There are preset parameters for the following devices: ProMix01 consoles, Yamaha 02R and 03D Effects ProR3 and Rev500 Expander Expander GM XG Pro Tools For the user, it is fully configurable 4 pages. The critics will say that the manual does not talk so much about it (half page), but in fact it is quite sufficient for Yamaha assume that everyone can master the MIDI standard.
Did you find this review helpful?yesno
»

michabeavis's review (This content has been automatically translated from French)

It's super simple for those who have the habit of numriques tables!

Everything is perfect !!! I find everything my taste !!!

The most well obviously the total recall function and sound, display, use a mouse to travel through menus easier !!!
Did you find this review helpful?yesno
»

I use it live. I need a digital table for occasional use, it is perfect for that. With ADAT card and eightfold preamp ADAT + a eightfold equalizer ADAT input, it's been a good config. It is more comprehensive than the 01V that is the same price.

I occasionally use since 2007.
I tried anything else on a regular basis, I can not compare.

Everything is still valid.

Unless the sampling frequency (48 kHz) but honestly unless you have a requirements contract that has no more interest in work: the cd is a tjs 44.1 kHz, the DVD has 48.

Very nice reverb (much better than the lexicon rtas, but not editable)

Quan gift comes from analogue requires a little getting used to: in fact the same set of 16 fader handles both the sentrées 1-16 and 17-24, bus / to, and effects sends, etc. . must be taken to be in the right way otherwise they will not be on the side that we think.
So, a lot of trouble with the live 01V and a digital consoles because of Eprise hand too controlled.
In addition we do not live tjs time to enter a sub menu to refine the scale.
The 03d communicates well with sound cards (via ADAT) professional digital devices (connections aes ebu) manages the 5.1 and was produced with this in mind al epoch: it was a tool targeted audiovisual auditorium.
Many albums and films were made then stop over to the snobs in throwing in the trash all that criticism is more than 2 years of age: the stuff is true tjs has been a good pretext to excuse his own mediocrity.

The converters are better than most sound cards convertos the same time.
After recess that there are better, recess that progress has been made. But one can easily bypass the preamp and pickups connect Focusrite ADAT rack or other so let's stop rallied to this: what will bring the same analog console versatility at this price?

When compared to the mp3, I do not know what this comparison is based. Obviously the difference is obvious. a yes but if we necessarily between synth VSTI cracked or freeware that will ring metal, which is to blame?

Analog and microwave sources are quite well rendered.

For about a year
A number, both at home audi, audio-visual studio that specializes in music studio.
Remind us that it was a compact console. Do not ask 32 mic preamp with class a. .. very well known that a single slice will cost the price of the console!


I suggest a home studio while seeking to increase the versatility of its installation on the cheap by acquiring a tool that was inaccessible while ago and has been designed according to the criteria pro at the time, still in force today criteria.

j added that the sterile polemics about his supposedly cold my 01v and 03d lost a year of doubt and testing to realize finally that they were only conversations geeks.

However, all comments are not illegitimate facillement may have damaged her if we saturate the converters ....

It makes music! and 03d is very good for that!

Did you find this review helpful?yesno
»
Read the 6 user reviews on the Yamaha 03D »

Yamaha 03D manuals and other files