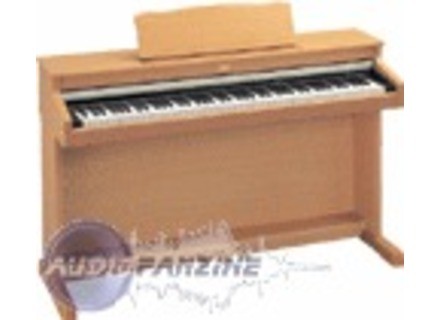 macsurrel's review (This content has been automatically translated from French)

The touch keyboard is pleasant, neither too strong nor too soft, however, the trill is much easier and faster on a good acoustic piano. The French manual is well done.
The recorder is basic (single track) but it is very easy to use and you can constantly monitor what is playing. We do not ask him more and he does his job very well. No complaints.
For my part I do not play in regular light touch, as it allows to deliver much more accents, finesse, crescendos, the sound is sharper, clearer and better quality. With a heavy hit, we hit hard or too strong, the sound is leveled, we no longer hear the nuances of the musician. It is certainly a matter of habit, but the stamp issued by the piano light touch seems to me much more musical.
With the heavy touch, the sound becomes dull and dull.
I never use reverb or chorus board. I prefer to add reverbs made by other machines, the rendering is much better.

The sound is good. I mean that the piano keyboards compared to arrangers, you really hear a sound closer to a real piano. I do not play other sounds but they also seem to me to be relatively réalistes.Il two separate things in the digital piano sound: onboard sound and sound broadcast. The sound output is that which passes through the speakers. The internal sound is one that is programmed and that is capable of conveying by the two outputs to drive an audio tape recorder. The internal sound is good but there are serious too runny and I am forced to equalize for something more musical.
The sound output is very pleasant: the speakers under the keyboard deliver a dull sound (because of their placement) and sorely lacking treble and clarity. At high volume the sound is "dirty" and very messy. A smaller volume is more enjoyable. This is also one of the great benefits I found these pianos, they can work for hours without getting tired ears but be careful too low volume we take bad habits and when to attack a tape recorder up to the fact the noise completely changes the dynamics management, including the ratio of the power left hand-right hand. So we actually interest in playing a volume of compromise. The dynamic is very correct, we can make beautiful shades pianissimo-fortissimo.

I have a good overall opinion of this I play piano for twelve years. Of course I would prefer by far a true acoustic piano because the sound is so much better and because when miking acoustic was free to color the sound at will through the choice of microphones and their location. Nevertheless, for those who make accuracy a priority, the benefit of having a piano that never goes out of tune is undeniable.
I tried some other digital pianos, most were much worse than what Korg (because of keyboard sounds too soft or having to do with the laugh of a real piano), but one was much better (sound output) because of the quality of amplification and speakers.
I'd rather have a lot of acoustic piano, same right (I prefer the pianos that will seem odd, but that's another debate), however with a small budget I learned to play on the piano realistic sound that's why my view is positive.
I have a concern however: for some time certain keys when struck deliver twice as loud (never the same key, random). So far I résolvais the problem by removing back-printed circuits under the keys. But today it no longer solves nothing and I have a Ab is not to return to normal. I checked the diodes, all in good condition. I'm not electronics, if someone could inform me I would be happy.
Did you find this review helpful?yesno
»