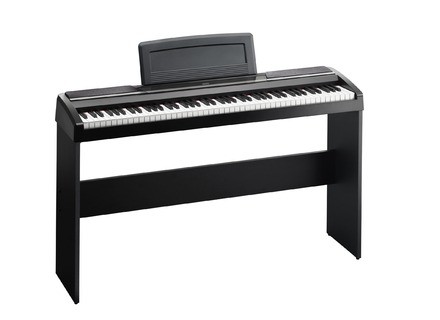 SP-170, Digital Piano from Korg in the SP series.

Korg SP-170
4
The Korg SP 170 is a rather striking entry level digital piano, in that it has no buttons on it! It looks like an instrument instead of a machine. Visually, the SP 170 is a thing to behold, and the way the chassis itself feels screams quality when compared to its competition in the Yamaha P95 and Casio Privia PX-130.

Thankfully, the SP 170 doesn't share the polyphonic plight of the Yamaha P95. I has enough to get by, a strange 120 note polyphony, just under the generally used 128 note polyphony but just as acceptable.

Especially since you can't layer voices with this piano. Yup. That's something that this piano doesn't do, unlike its competition.

This piano also has the weird lack of 1/4" outs. Like its friends, it can be fixed with adapters, and considering the market, it's acceptable, but it's still quite annoying to have to deal with. Thank goodness again, for the MIDI.

Everything that needs to be a button is painstakingly tucked away where no one can see. Even the volume is out of the way; this gives the SP 170 a very clean look. It is quite deceptively full of features though. Hold down the top three keys and depress another key to change the sounds, and to adjust reverb, chorus, etc. It is a bit clunky at first, but it's endearing once you get used to it. It also discourages drunk groupies from pushing a lot of buttons on your piano (speaking from personal experience with the Casio Privia PX-330 I personally own here).

Once again, I urge you to listen to samples and if possible, try the feel of the piano itself; this area is entirely subjective.

In my opinion, however, this is where the SP 170 gets a little erratic. I'm NOT a fan of the samples at all. The only samples I really like are the Rhodes and the FM piano, the grand piano doesn't do it for me; the decay of the notes is very bizarre.

The feel of the piano is also strange. While it's obvious that these pianos are all artificially weighted, this makes it the most obvious. It's heavier and spongier than its competition, but it doesn't seem to be because of hammers.

If you're stuck in this class of digital piano, go for the PX-130. It's the most comprehensive and easy to use. Once again, you should try them out to see what works for you. They are all roughly the same, except the Korg and Yamaha have a strange set of limitations that the PX-130 seems to transcend.

Again, see for yourself. The Korg SP-170 is still a perfectly great piano if it's going to sit in a living room!
Did you find this review helpful?yesno
»

gotzs's review (This content has been automatically translated from French)" mouai"

Version with some added buttons .. that facilitate the handling, but it is less for aesthetics. Too bad?

Good feel for my "first" piano. I bought also for ease of use. It lights and sounds.

The sound can be sent directly through headphones or an amplifier. It's cool to work alone or be heard in a group.

Good level of expression, but the range of sounds is too limited. Only a piano sound seems exploitable (about 9). Possibly also the harpsichord. Otherwise it is useless.

I think the keys have yellowed too fast, despite the protection that I brought there.

Other than that, nothing special. It makes the job for its price, and I have a touch that is not "gadget supermarket." And for the price, I think this is one of the few.

For learning piano, I think it holds up. And at worst, I'm not afraid of the board for "music" festivals among friends

I like the <span class="skimwords-unlinked">touch. I am a&nbsp;</span>beginner and I find it is quite good considering its price on second hand.

I use it recently (two months) and in small doses so my opinion is not very well founded.

to start I think it's good, I hesitate between this and the P95 but I had a lot of Yam (Motif. ..) so I wanted to go a bit beyond.

hhub17's review (This content has been automatically translated from French)

Korg SP-170
5
88 keys, speed, touch that resembles a piano for the handyman that I am.
SMALL JACK 2 headphone jacks, a power MIDI, taking power-supplied, a sustain pedal jack-supplied.
A white plastic desk the most beautiful effect when the cache with a score-not included.
No kick, stand, anything to put the piano top.
No USB port that would have liked, however, nor from noon IN / OUT / THRU, or exit BIG JACK mono / stereo.
Good, entry-level price and attack force, so the score of 8 reflects the price.
Oh, and also, mine is white or black or wood. I should look for to match my guitars!

The keyboard is very pleasant for me, I seem to play a real piano, with keys that are resistant, that bounce and that look real piano keys if you do not look at the rest of the instrument. Well, I'm not a pianist, but I still hit the pianos in my life and that, that it looks good.
Manual: essential because the configuration is done at the keyboard, no buttons visible. Well, in two pages you know everything.
So if we know in two pages all is that the general pattern is simple: you press the last three buttons on the right to enter selection mode (you can hear a click instead of notes), press a button selections of his or midified piece, and if we really want to address in something turning the volume knob from behind.
Well, actually, there are thirty-six alternatives, all the keyboard: reverb / chorus, pitch, transpose, pitch adjustment (handy for harpsichord accompanying an oboe or other instrument not tunable).
Selection noon: then I am not there yet, I did not even interface with proper outlet, so I do not know. In view of the manual, everything is done on the keyboard, of course. To learn by heart if it has use.
9 because everything would be so simple, but certainly much less beautiful, with buttons, simple pimples!

The sounds I agree entirely, the effects, I do not use it, I have everything I need on the computer and the Toneport when needed.
I like the pianos, because they sound realistic enough, and HP and the amp is enough to live up to what I hear.
Other sounds I do not dislike them, except maybe the strings, it's weird to play the strings on a keyboard like this, it seems more normal type on a keyboard synth, and they do not sound very realistic.
The words surprised me by its proximity to that of a real piano, but hey, I'm still not a pianist, there must be a trick.
The use of the pedal, for cons, it does not hit in the foot is too soft and artificial, but the result in terms of sound corresponds to what is expected.

I have recently, I have not tried before to avoid to get into something than 1000 € and more, I just wanted a piano as realistic as possible for not too expensive.
I like the value (495 € with German VAT, more expensive than here).
I find it somewhat resembles a real piano to satisfy me, and it makes you want to work and learn to play nice on by his side.

With experience, I probably would do that choice, I do not think you can find both the price otherwise. But I would look at the color because white is white ...

Did you find this review helpful?yesno
»
Read the 6 user reviews on the Korg SP-170 »