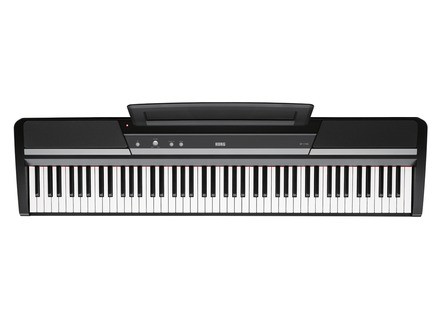 SP-170S, Digital Piano from Korg in the SP series.

pianota's review (This content has been automatically translated from French)" Super portable keyboard!"

Square pedal works very well and holds up well (a good point because it is not always the case).

Note that it has a touch fairly quiet; the casio PX150 is too noisy, the yam and korg much less.
Only the scale could have been better made ...

The sound? Awesome! I even tried store korg p105 with yam and there was no photo: the sound of the yam is rounder and electronics while that of SP170S was purer and sound, nothing. Huge surprise that tonight cheaper of the two that is better!

It was nice to hear compliments on that yamaha and reviews on other brands, including Korg, I advise you not to throw closed on one brand over the other eye. If you have the chance to try and compare, do it! Choosing a piano is part of a very personal feel and impression. Many other things, some will tell you the good and bad but the other does not necessarily rely almost unanimous opinions either.
Eg, despite their reputation, I'm not really fan of yamaha; they make good stuff ok but there are better, cheaper and just as reliable elsewhere.

So its great, the first piano (not the second, which is mono moreover, seems to me there), e piano are also goods and strings. I am not using the rest.

Some owners SP170S or other korg speak sizzling in hp; it is true that a strong game and the volume more than half, we may have some reactions in hp and small vibrations on the walls of the piano (due to poor insulation). But nothing annoying, almost nothing ... And then suddenly, it "feel" when playing the piano, it favors the interpretation.

The expression of the keyboard (touch) is very good; it is firm (not too hard and not too soft), it's not overly plump, I'd love an ivory but hey ... the plastic coating is still. Note that the scale is perhaps not very visible; acute look almost as heavy as serious, there would be an improvement to that side. Otherwise, it's ok.

I've had a week (that is little but I still wanted to share my impressions as I went through many models, it does not take me very long to see the faults qualities.

(Small) less: slight graduation / plastic wrapping may be better insulated (high volume and strong game, you hear and feel some vibrations and small hiss but it remains discreet and passenger)

As soon as the lights, we notice on the sound and touch; there we said, at this price point, such expressiveness, bravo korg!

all editable via keyboard shortcuts (no buttons on the piano).

The touch keyboard is it nice? Should your use?
- Touch semi-heavy hammer approaches the touch of the piano, very good omen.
- Yes perfect for my use.

The manual is clear and sufficient?
- Yes, very simple, we quickly made the turn.

The selection of MIDI channels, patches is easy?
- Yes, simple combinations of notes (shortcuts) to learn (easy to remember) to switch from one instrument to another, from one end to another, or to change octave.

The sounds they are suitable to your style of music?
- Yes, totally. Piano, Strings and Rhode are breathtaking.

The expression is good? (Response to velocity, aftertouch)?
- Yes, unbeatable for its price range ... Among the competitors must build in the 700 + € even for something comparable.


Are they realistic?
- Yes

The effects are they effective and appropriate?
- Battery hair properly.

For how long have you been using it?
- A little less than a year.

Did you try many other models before getting this one?
- Yes

What thing do you like most/least about it?
- Easily portable, soft, no frills in the look, and everything is working .. KORG in its purest state.

What is your opinion about the value for the price?
- Excellent.

Knowing what you know now, would you make the same choice?
- Without a doubt!

Korg SP-170S manuals and other files