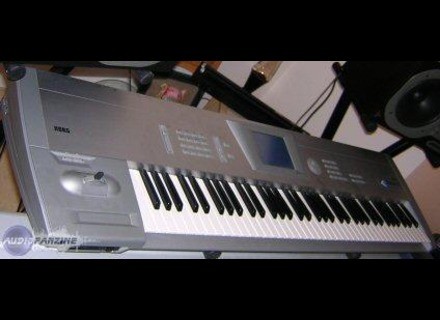 Trinity Pro, Digital Synth from Korg in the Trinity series.

alissezik's review (This content has been automatically translated from French)

Korg Trinity Pro
5
Hello,
I will briefly dcrire this monster of music.
keyboard is a great opportunity with standards.
the sound is warm and powerful synth sounds are impressive.
Programming is a complex but can fortunately he has a glove touch screen.
The squenceur is easy to handle and complete trs.
The effects are numerous and widely parameter. Their use is quite simple and the influence on the sound empty.
The tape combined with joystick is great!
The keyboard is sturdy and does not sound like some plastic keyboards today.
the catch may be to find one in good condition because of the keyboards that have experienced the largest scne.

- The configuration gnrale Is it easy? YES

- The edition of sounds and effects is it easy? it takes a little getting started

- The manual is clear and sufficient? ... YES

- The sounds they agree your style of music? ho YES

- The effects are they effective and responsive? more than YES

- The expression is good? (Raction VLOC the aftertouch)? yes

- What are the sounds you prfrez, you dtest? ... The synth sounds are great

- Have you tried many other models before acqurir? I am 25 years clavier.mon first keyboard was a Korg POLISIX, APRS and the list goes on ... The Trinity Pro is the best keyboard I've had (at least twenty)

- How do you report qualitprix? Today, affordable opportunity for ordinary people

Korg Trinity Pro
5
Type keyboard synth squenceur intgr 16 tracks, 512 Factory Sound ditables.
4 Audio, MIDI in / out / thru, sustain pedals and assign.
A 4-way joystick (joystick pitchbend on right / left, specifiers effects on joystick up / down), tape effects, two switches to "fix" its effects on data.
128-note polyphony, but I believe I am not sr.
The "suits" can overlay up to 16 basic sounds. For each component of the combination sounds, it RULES volume, pan, stretched over the keyboard (ie, what notes which note that the keyboard sound is "played").
Robust keyboard, touch screen, buttons and potentiomtres impeccably aligned and REFERENCES.

Never too read the manual, the Trinity is quite intuitive with a large touch screen and menus.
Saving presets on disk, so possibility of charging other banks of sounds through it.
For more precision with the latter, I use a stylus of Nintendo DS.

The edition of sounds is done via the touch screen and buttons is very clear.

So we are in the heavy.
To be honest, I bought this keyboard about 15,000 francs in 96 or 97: it's still the matress pice of my (small) home studio, and I do sparer NEVER (under duress from well obviously).

The effects are good: Dlay, reverb, EQ ... and a real asset to the sounds.
Only BMOL: they are not included in the squenceur: rendering the latter is very "flat." Moreover, the edition plans of quite tedious == squenceur as I pass.

Sounds prefers: first and primarily, of very good organ (hammond type or type pipe organ - but they sound a little too even when I go electronic t, who am also a "real" organ), strings and some brass flying high.
Then come sounds good: other strings (violins, double basses, ...) and some brass instruments, plus two or three layers of atmosphere (not too likely chus electronic, me up, rather very classic ") and one or two electric guitars quite impressive (especially thanks to the effects of" feedback "led by the joystick).
Then, we treat the "average" pianos and guitars clean, fairly weak people (though the acoustic piano draws even when its hairpin of the lot).
Then finally, as with any keyboard, the disposable, sounds that once tested and on which there is no return again. Like any keyboard, there a.

15 years of use, 15 years of happiness blinkered. That says it all!
Particular feature I like least: no effect on the sounds in the squenceur - then we play the great sound, you say "cool I record" is recorded and ... what is meant with squenceur is almost Bontempi-like.
So keyboard live in priority.
Then, weakness, certain sounds, somewhat down compared to other brands: pianos and guitars clean, mostly.

Strengths: everything else! Robust, sound, power, polyphony, touch screen, the KORG TRINITY is perfect for a musician who wants big sound good though classical GPs.

Before the acqurir I vgt for years on other ISP and Bontempi two numbers: both say that the slap that I took the muzzle when I tried the TRINITY was monumental. So I bought the same day, I think the seller was believed that when I gave him the chque of 15,000 francs (the era).

With the exprience I remake this obvious choice.