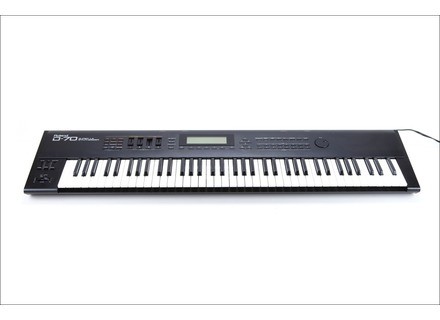 Ad of the era boasted the mrites the D70, qualified by Roland as "the biggest sound of all" ..... matter of taste. The D70 is a response KORG Roland, the output of M1 (1988) was the shadow of the career D50 released one year early. Therefore designed a hurry, it suffers from a synthesizer ergonomics hair pulling. Unclear edition of the pages. A hierarchy of totally droutante memorize and difficult menus. Ms. MIDI is a horror program.
With practice, you come to master the beast a bit, but at the cost of such efforts we quickly discarded.
DLM aka "loop differential modulation" as it is unusable. This function intended supposedly scan loop waveforms, a little Manire PPG, only produces unsightly noise.

The piano sound is quality vibes and electric pianos as well. As against the evil and curly summit hollow strings.
The D70 was the first synthesizer offering rsonnants filters on chantillonns sounds, the result is far from being convincing: when pushing the rsonnance, the sound becomes tinny. It is also very difficult to get good real analog layer with this type of filter.
The D70 also suffers from a bug (the one I dtenais anyway, but I do not n'tais the only complain): st processor sub-dimensioned so that the LFO slows down in proportion to the number of notes simultaneously cheeks !!!

However, we can get some interesting and rich enough patches by stacking several layers of sounds. But ultimately, it's more of a reader than samples of a real versatile synthesizer. If you want to program analog type sounds or effects, the D50 is so much more powerful and easy to access.

I bought this synth in 2001, after having rv long. I gard six months because of me a lot. Except that it has a good 6 octave keyboard in a very compact shell, it presents synthesizer will present little interest.
Did you find this review helpful?yesno
»

Roland D-70
5
The D 70 THE result of the synthesis of D50 and D110 the DLM provides unique sounds that make this a vintage synth of choice.
The keyboard is the best 76 scores synth hit to my knowledge, any Aftertouch finesse for tablecloths and violon.Après 20 years of service he is my master keyboard, he can play on MIDI Channel 4 to the touch and tone palette is a controller good practice. Its polyphony 30 notes quickly saturates multi timbral, but to get a big sound alone is a top.

For editing sounds it is preferable to use an M-Qouest or other software to get a good glimpse into the creation of sounds. In manual mode it is still easy, it does not get lost in the tables.

Big sound and a DLM that can give an effect electro.
the keyboard gives finesse to your game and color to the sound that you control. It is unique for cela.le control of virtual synths this keyboard is amazing compared to others.
effects are somewhat sintillant, Roland usual.
Make a big sound very rich patches of 3 changes the way you play and compose.

In service for 21 years it remains my master keyboard reference has traveled a lot and weight you recall that Rolls is not light but quality.
the +: / keyboard control tonne pallet live
/ Unique sounds
/ Beauty of the object

the -: / weight and emcombrement sessions studio and stage

15 of 19 people found this review helpful

Roland D-70
4
Keyboard 76 keys, dynamic, after touch, trs of good quality. A really good keyboard. Big screen, in any assignable potentiomtres 5 DIFFERENT Settings, as CONTRL volume expanders for example. The technology used is the DLM, the D50 diffrent this has nothing to see. As proof the cards can read the D70 are those who go to U220/U20/U110/MV30. He is not heavy, 10kg. It can really serve keypad but the key contacts are fragile force for years. Sounds are used to classs as roland, it is by packet 8. Or 8 banks of 8 sounds, 64 sounds are. And since there are A and B, then there is 128 tons sounds and performance.
I'm using it as a keypad and as tablecloths.

IL trs is efficient and requires some practice. There are plenty of menus and many possdes rglages possible. The DLM does not handle empty, the D50 is easier. But your exact is really good. Tablecloths and sounds are synthses these strengths. The large screen makes it easy shipping. As a control keyboard has lots of possibilities but its use is not intuitive, and even the manual avaec sometimes we ask questions.

I love this keyboard. How to be objective! The pad sounds are huge and much larger and deeper than korg. It is sometimes comparable to JD, because he can fight in the same catgories. Filters rsonnent mchamment, it should also be mfier because it can be a little too aggressive. It sounds super flte pan, a good piano sound of roland, sound rsons terrible sounds dpasss batteries, sounds dpasss organ, the orchestral sounds horrible ... There are not many of library arranged on the Internet. The sounds are not many compatible. It can read maps and maps U110/U220/U20/MV30 RAM 256k

I love this keyboard

This is my deuxime. It marries well with the trs contemporary music but is not designed to reproduce sounds of other instruments (such as brass or other). It is beautiful and not imposing trs o its ease of transport. But be careful to touch the keys.

But it's my opinion!

Unlike the previous ones opinion, I found the D70 very easy to ACCS, from the edition of the sounds which navigation can be a little twisted sometimes. The DLM can provide some interesting rsultats, but it quickly turns in circles. Roland marked the era in advertising that the D70 with its DLM opened the door for thousands of new sounds, but 100 times the same sound with slight variations, has does not count!

The manual is clear my taste.

In the era of its release, sounds pretty taient no more. Today, I do not see too much Intrets a few non-acoustic sounds go, as the sounds of the D70 are widely dpasss and lack of personal. The effects on them are all rotten and harmful oddly on the polyphony (which drags a rverbration = 1 channel roughly!) If four tones in the patch, you get faster with sounds that cut before being finished.

I bought my D70 nine the era (6 months APRS its release!) And I sold it long ago, about 10 years. It remains a key INTERESTED if you want a keypad (base) 76 keys trs transportable, while having some sounds handy. For the era, a good synth c'tait (76 keys and aftertouch not heavy c'tait the exceptional era!), But he has no reason to go down in history!

Did you find this review helpful?yesno
»
Read the 7 user reviews on the Roland D-70 »

Roland D-70 manuals and other files