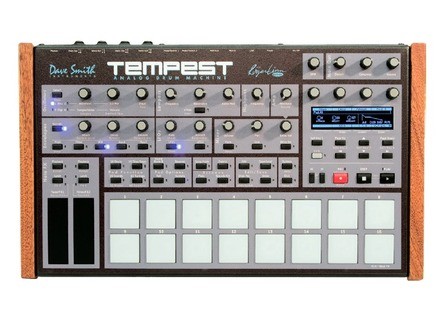 Dave Smith Instruments Tempest
3
How they gonna make a really dope drum machine, which it is, but have no sampling capability? Really wack for that one... There's some really cool features for what drums are already on there, but I want to throw my own sounds in there to use those features, and I can't, so I gave it away. Maybe they'll make a newer version? Someone even told me they will make an update so that we can use our own sounds in the future... I really hope so, because this thing is great for what it is... but I just want more! I also noticed the beats to be just a little thin sounding... but I guess you can just EQ them after the fact.
Did you find this review helpful?yesno
»

Dave Smith Instruments Tempest
1
You can read the full specs at the manufacturer's official website.

Using it demands some time to get familiar with it, it's a complex and powerful synth, as well as a sequencer.
Editing sounds is rather pleasant, you rarely have to push 4 buttons at the same time to do things.
However, the sequencer is really limited. I have more often screamed in rage than in joy because I have managed to pull an impossible trick with Maschine... There are no undos on the Tempest, so there you are 20 minutes tweaking a pattern, make a bad turn and you can kiss your pattern bye-bye...

This is its only strength. On the model I had, one of the voices always produced sound (a triangle, I think) even if all the oscillators were muted. No calibration ever helped resolve the problem.
As usual, I was not dazzled by the factory preset.
It has a polyphonic mode, in theory, because in practice the story looks completely different.... The internal sequencer doesn't record several notes at the same time. Envelopes reset to 0 every time you trigger a note. Try to make a nice pad with that...

I know I won't be making any new friends for this, but I think this unit is awful.
And I don't say that just because it obviously doesn't fit in my workflow, I don't judge it for that.

But I'll give you a warning: If you are used to the versatility of software programs (like I am to Maschine), you'll have a hard time, it's like going 20 years back in terms of usability. Maybe that's what you want, but I have found myself more often handicapped than stimulated by its limitations.

When I say that this unit is awful it's because it's full of bugs. It's been three years since it came out and there is still no stable OS version. So you find yourself having to choose a version that offers the best compromise in terms of possibilities and bugs. Indeed, not all functionalities mentioned are available on the synth, maybe with the next update (the free-running LFO, for instance)...
But worst of all is that when I tried to use it with my DAW, using the Tempest as a slave with MIDI clock, it wouldn't even sync to time. Sometimes I'd get variations of up to 10bpm. A drum machine that can't play in time... For $2000, that's stretching it way too far.
In my view, it's a product that isn't finished and I don't know how anybody would dare bring out a thing like this... They probably thought that, since all the problems are software-related, it's not that bad and they can always make up for them with updates... The problem is that the updates never come. Although I've heard rumors that development has resumed work... The same old never-ending story.

I can already hear fans of the Tempest telling me I didn't use it enough, I don't know how to use it right, it's a unit that has a steep learning curve, blablablabla.... I don't have anything against learning a new product or new concepts. But learning not to do certain things because the product might blow up in your hands... It's like using Windows 95. It's not learning, it's a waste of time.
Did you find this review helpful?yesno
»

There are 6 analog voices on the Tempest, and each of them has 2 digital oscillators and 2 analog oscillators. The Tempest is fully loaded with a large bank of presets and preloaded samples. There are 16 pads that are pretty well built, but they are not as touch sensitive as I would have liked them to be. There are over 450 sounds on the Dave Smith Instruments Tempest. There are also, 8 TRS outputs and a headphone ¼ output; but the Dave Smiths Instruments Tempest does not have any inputs.

One of the pluses of using the Dave Smith Instruments Tempest is that there is an online community that you can tap into. You will be able to have all of your technical questions answered and exchange sounds with other users. Not too long after the Tempest came out, they came out with another driver update, So all of the drivers are currently very stable.

The quality of the Dave Smith Instruments Tempest is solid; it is well built and portable. I am happy that I have chosen to use the Tempest. The value for the price is decent, it does seem like it cost a little too much at times but you will find yourself using the Dave Smith Instruments Tempest very often once you purchase it. The manual will help you right away if you have any questions, and the communities of fellow users are available any time of the day!

Dave Smith Instruments Tempest
The Tempest has a midi in and out, but right now only the midi in works, we'll see what the upcoming updates bring with themselves.

In terms of effects, there is a distortion section and a compressor, which works only on the master output, and there's a delay.

In terms of sound you have two digital oscillators with a high-quality sample library that can be edited at will, you can do a lot of things with it. Plus, you have a full-fledged synth (two VCO-VCA-VCFs) and ADSR and a digital LFO (to be confirmed)

There is no editing software for PC.

The sequencer is darn good with up to 64 steps, a 16-beat mode (16 patterns), 16 sounds allow you to tap the rhythm, like on an MPC, 16-beat step sequencer, 16 mutes, 16 tunings and 16 levels, like on an MPC. There is also an adjustable roll mode, a reverse mode and, obviously, two completely adjustable fx sliders that allow you to do heaps of things live, but also to record fader movements, although only for one sound at a time.

The usability is not bad at all, given the possibilities of the unit, but you often need to browse the menus. Accessing the sample of the two digital oscillators is no very handy either, you always need to press a pad to hear the sample, it can be long and exasperating.

Editing sounds poses no problems, it's great actually, and there are lots of parameters directly accessible with the pots of the Tempest but, once again, have to go through the menus, which is normal, given the possibilities!

The sounds are perfect for my music style (Dubstep), you might even think it was made for that! Only the kicks lack some punch but it's doable if you put yourself to the task, because the samples are just a plus, since the main strength of this drum machine is the synthesis section, it's a true 6-voice polyphonic synth.

The expression is very good and the workflow is worthy of an MPC.

The effects are terrific, the distortion is really thrashy, the compressor is effective, but not like a dedicated compressor, the delay is very good, too, and the fx sliders are really wicked.

I love everything in terms of sound, I have no complaints, it's very good.

I've been using it for 6 months and I can say that I could hardly do without it. This analog drum machine is unique in its genre and capable of creating a song by itself.

I have a jomox Xbase (I miss its kick!), a MAM ADX-1 and different grooveboxes (MC-909,electribes), but the Tempest plays in another league.

For me, its value for money is all right, given its possibilities, you only need to look at the prices of polyphonic synths.

And yes, I would buy it again without hesitation, now that the updates solved all the problems I had in the beginning. Thank you to PYm for his work and for being so active and accessible in the DSI forum, as well as to the Tempest community that shares their projects, which can be directly imported via sysex. Frankly speaking, it's really good. You need to test it, hear it, because it's a big investment. It has its own character and it doesn't sound like any other drum machine ─ and that, for me, is a great plus.
Did you find this review helpful?yesno
»
Read the 11 user reviews on the Dave Smith Instruments Tempest »

A new OS for the DSI Tempest

Published on 01/05/15
Dave Smith released OS v1.4 that completes the sound and feature arsenal of the Tempest drum machine.

Listen to the 11 audio files about Dave Smith Instruments Tempest »