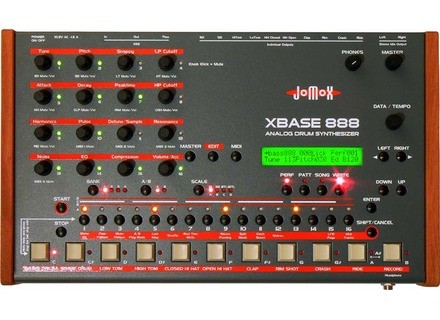 awax55's review (This content has been automatically translated from French)" No regrets on my part, although there are a few flat"

Bass drum, snare, low tom ht and analog (the snare and kick are just two huge tom lack of modulation) and all that and controllable via midi cc

The other 6 "track" contains 31 samples of varied qualities of his 31 samples 26 samples can be replaced by using a personal pc very simple interface used
The sequencer is effective but limited to 2 measures what is a fair bit.
Personally I sequence with my rs 7000 now

Simple but effective manual, we take in hand the machine after a few minute
sound modulation and simpae through 16 knobs placed on the machines (j myself tjrs distrusted his knob they not look very strong, but for the moment nothing has been reported ....)

The sound is just huge, it sends really heavy.
For samples included, it depends bah tastes and color but I find good quality sound and can be seen as its own imported samples, we did more that replaced the unwanted

C was my first personal machine purchased in September 2012 (I had already turned the knob pretty before, and has a bit hit mao but I mix the last ten years)

Well me I'm super happy because the sound is really fat is easy to use in general, and is configurable midi

I personally via a sequence rs 7000 in order to make longer loops because as I have said above is just 2 measures c j and then had an old controller UC33 twelve o'clock j put my pan and my 2 lfo above for both function are quite laborious used on xbase itself and c is the total feet: D

Yorkho's review (This content has been automatically translated from French)

Some time adaptation is necessary, it is not more complicated than&nbsp; another but less generalist
Again the analog sound editing is complete weheras a further refine of the kik's attack would be suitable

In order kik, hat, tom and snare are really usable and ought to be easily modified, for the rest it is the old debate analog-to-digital

revega's review (This content has been automatically translated from French)" Beautiful machine with a very marked."

JoMoX XBASE888
4
Here is a drum machine with a subtle mix original analog and digital basic for everything else. Use the front for much of the functions and menus in the rest. From this point of view it's pretty well done and deserves praise. Effects but lacking a sequencer Roland TR-type very intuitive, great lines to start quickly.

The use does not require great skill and is acquired fairly quickly if you deign to take a look in the manual provided that the manufacturer is not clear enough. Editing is fairly fluid.
So use this level is pretty simple, just a matter of habit like all machines equipped with modern menus in addition to their general display.

As for his part well and there I will be very critical because it does not fit all. It is imperative to listen to it and manipulate it to get an idea. We can say that the game is fairly analoque binary (kick, snare, tom, high and low ') and the digital part not dress too bad those first sounds (except that one feels a lack of obvious memory planed on certain sounds as they say).
Curiously I have not managed to find a place of choice, not because it is bad but the sound is very distinctive Jomox. I think to use experimental electronica, see Synthpop Hip Hop or Trip Hop (lots of 'Hop' in fact) that's fine but otherwise I'm tank. I'm not one to give a style or a label to an instrument but the Jomox is clearly pointing in this direction.
Part sampler is pretty well done but I was a little on my hunger, there is a lack of momentum on the machine. I had my beautiful compress database files, nothing to do sound seemed a bit flat, down. Caution may be it is related to the potato sounds like the Jomox so I did would argue no more. But no matter what is more significant on a machine of this type today.

It is imperative to try it before going as it can become the tool dream or just the opposite. For my part, it was not the case, I had the great deal in every way I've never really managed to get him the perfect set. I kept one and I am separated for a percussion generator less successful but more up my alley at her.

Finally we can say that the Jomox 888 is a good drum machine, very well built, very well thought out, very strong and very aesthetic (TR909 style) but the sound has a well-defined identity that requires an assiduous listening before acquisition . Enjoy!

JoMoX XBASE888
5
Midi in out thru
10 mono jack out individually, plus two Stereo master that comes all that didn 't t branch individually.
Squenceur 16 or 32 no longer the oddity like 12 steps, or 8 in triplet ...

A happiness that is clear, round black buttons to put him and the white square to select the instrument.
Trs all enjoyable to touch that is important.

English manual, but simple.
The ditions is via the edit menu, with each instrument paramtres SPECIFICATIONS.
The buttons are a rgal of precision and gentleness.
Press to mute the instrument of choice, the top ten in the order (kick, snare, toms Plus four track midi out to a synth squence = 16 pots.

Analog sounds are to a gun, the kick is really dmentiel, especially when that one is a subtle edit at each step. You enter the triezime dimension.
The snare trs well, according mtalize a little weird, but that is because it has just be "inventquot; ...
Toms, hi and low, are terrible, three Settings, with volume four, but really sound of thunder, though full, ample, while slamming a percussionist.
A play with the volumes (especially the toms).
See the other 6 's of samples, so I have started my own, the short samples of TB, the jomox pass in my filters, the MB33 mk2.
And password in the VAC, and can make the pitch on said samples, and this step by step.

Translation, your samples on potato, and can be squence fawns still sharper than a piano rool (Piché, tune, attack, decay, and other all dpent of the instrument on which the as glue).
Phnomnal!

I confirm that as t mark in the post, its gross dcoffrage for use with a virtual rack of effects (or other) and the output spares.

It has been three months since I 'm used, now I know how the shuffle, and the not say no.

And in the end it is like the person who left a notice on the minimoog, saying that as an instrument to play, that is wonderful.
The c is the same, a faith that we know the gear is lighter, it s is put his head in his samples was so well organized it starts with the kick, as it is for mthode to its small variations on each step, we move to snare, and all s' in chains, in rglant the volume in real time without taking the cabbage, and in less than a minute you're on a squence 16 to 10 instruments, which he left that have to live, making mute, changing sample.
It is hellish, not only to techno, from 50 to 250 bpm anything goes.
Russian JoMoX finally kick TR, that is not too soon!

Did you find this review helpful?yesno
»
Read the 5 user reviews on the JoMoX XBASE888 »