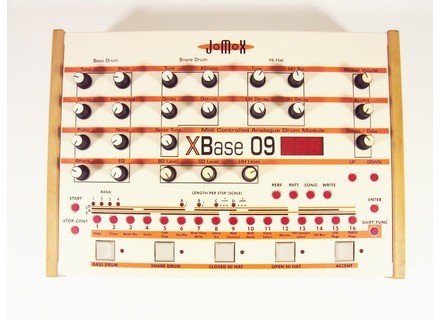 JoMoX XBase 09
4
The sequencer is the most confusing piece of crap ive ever worked with.i have always used it as a slave box and it has worked really well.all of the knobs on the front panel have a corresponding CC number so they respond to midi.this has been very usefull for writing drum and bass.you can change the length of the hi hat(for example)during the sequence.the only problem i had was when i hit record on my sequencer to record myself turning the knob in real time,some of the knobs data didnt show up on the track/phrase.so i had to go in and enter in each cc/movement manually on my sequencer.

The sequencer sucks because when you are editing a 32 step sequence and you go to page 2(17-33) you cannot see or hear what is going on with the first half of your pattern.and at high tempos..... this sucks...so use it as a slave and its great.

The sound quality is great.It sounds almost identical to the 909.The only thing i dont like about it is that the bass drum sounds a little flat.the snare drum is the same way,but not as bad.The best feature of this machine is the hi hats.the hi hats sound exactly like the 909.the rim shot is the weakest point,I havent used it at all.the clap sounds really good,but the 909 is better.all around the 909 sounds better...crispier.all i am basically using my x-bass for is its hi hats and clap....and the snare drum in one song...&quot;trip down further&quot; www.soundclick.com/440hz

I will get rid of it as soon as i find some equally as good hi hats....if thats even possible.

JoMoX XBase 09
4
The xbase09 has three instruments, a kick, a snare and a HiHat section.
The first two sections are analog editing is done via eight knobs for kick and snare for 5. The third section is based on 8-bit samples and therefore not setting aside a tune and decay.
You have a total of three channels polyphony (one per instrument) and three separate outputs in addition to the mono master output.
Xbase The trio is also equipped with MIDI in / out / thru.
You also have an output DYN SYNC that allows you to synchronize old drum machines! And that is very useful when you love mixing vintage and modern!
The sequencer has its bank of 16 4 of 16-step patterns. So all you need to compose, focus and with shuffle. There is no real-time recording, it is only in the publishing step. We quickly made, there are many memories, it's perfect.
Go one quibble by saying that 3-4 voice polyphony on the Hi-Hat section, percussion would feels good ...

I'll start by talking about a flat to use, it is the PERF modes and PATT. If you want to edit a sound, it must be PERF mode, but if we reach is further detailed settings in the sequencer must be PATT mode. And I confess that I use do not understand why these two modes were not united in a single mode.
There is another flaw I found for use in live, the volume of the three parties is managed with knobs, very little ergonomic instrument for cutting and re ... Failing sliders, mute by a party would have been nice ...
If not for the rest, the sound editing is done in a very simple and intuitive.
For it is the same pattern as that just samples of Hi-Hat, if you want to choose other samples, it is a little less ergonomic ...
I do not mean the MIDI sequencer that takes a lot of patience!
I speak of the defects, but this remains a machine very ergonomic to compose and edit its sounds so very fast and intuitive!

I often read criticism that the BAR had Jomox sound very aggressive and unsubtle ... I confess I do not understand how one can write this after using this machine for an hour. The tones are warm and powerful. You can really set the kick with great precision and subtlety and get his living and organic. The snare is also very beautiful. Even if it is less versatile than the kick, we get many shades and a nice presence. A compressor is required when we want to get something very powerful. but if we do not chase the ultra modern sounds compressed, we realize that this little drum machine has a nice personality.
The Hi-Hat party is composed of samples. This is obviously the least interesting, even if the engine of the LO-FI Jomox gives them a good potato output.
I believe there is an update to load their own samples. But I do not have the EPROM ...
The low polyphony of the machine still will take you to complete for sure, but it offers a versatile base and rich!

I use it for about 6 months and I do not separate myself one day.
this is a very compact drum machine if not extensive. But by updating the OS you can sequence a plug to fill the lack of polyphony.
The biggest thing for me is that it really sounds! Its sequencer is extremely simple to use, so that I compose at the speed of lightning with.
It is an instrument that inspires me and for me it's essential.
I was lucky not to pay the expensive, it would be difficult to regret this choice!

Nab!!daN's review (This content has been automatically translated from French)

Too high, ideal for a punchy live, to use for electronic music, not to seek its that approximates a real battery.

Drum very typer, a try before buying, if I had the choice I would.

This is my deuxime machine and I must say I galrer a bit, but we sy ds is a little one is doing trs fast!

For what is can the sounds of their jomox I urge to wash your ears!! The sounds are crazy ..... a prsence monster !!!!!

Please note this machine don 'see anything with a groove type er1 .... it is not as accssible MRIT and a little practice ...

Did you find this review helpful?yesno
»
Read the 12 user reviews on the JoMoX XBase 09 »

JoMoX XBase 09 manuals and other files