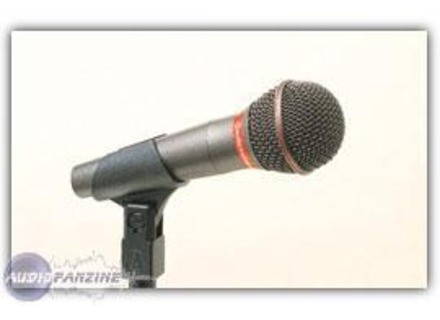 Audio-Technica ATM41HE
4
The Audio-Technica ATM41HE is a hand held dynamic microphone, best suited for use on the stage for vocals but also suitable for recording, although not it’s top recommended application. The mic has a hypercardiod pick up pattern, which is really what makes it best for vocals since you’re going to be singing dead into the mic. It will gather frequencies in the 50 Hz to 17 kHZ range, which is fine for vocals…

I only had the chance to try out the Audio-Technica ATM41HE recently for practicing with my band. I haven’t used it for anything other than vocals within this setting, but for this it sounded great. It’s definitely designed to be used in this sort of capacity, or for live shows of course as I do think that it is of the quality to be considered for a real live show. The mic sounded really crisp and full, especially when compared to the Shure 10A that we usually use in the rehearsal space that we’ve rented that comes with the space. Our guitarist owns the ATM41HE and brought it by for our last practice and I’m glad that he did because it trumps the 10A for sure. I’d be curious to hear it against a Shure SM58, as even though it sounds good, the 58 is more or less the industry standard and is usually hard to beat when it comes to this sort of use. The price is actually going to be just a tad bit cheaper than the SM58 or SM57, but I’m still not convinced that it would be a superior choice. Having said this, it’s still worth checking out as the Audio-Technica ATM41HE is definitely a quality microphone at a reasonable price. For me I’d still go with the tried and true SM58 for vocals, but I can definitely see some people choosing this one for it’s cheap price and similar design.