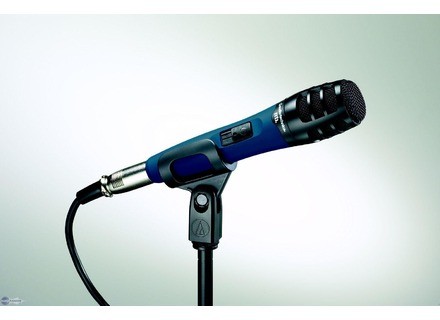 Audio-Technica MB2k
5
cf: the above characteristics.
I would add however, that the microphone is placed in "Micro Instrument" even though it actually has a clear versatility!

Initially, I used to sound to my grand piano. It was a bit of a makeshift sound but I was very surprised by the response of the system.
After having too lazy to buy another micro (and with a small hole in my wallet), I used it for something else: voices, instruments, amps, battery even a little ... And I have never been disappointed!
I use it for a year now, and the only fault of sound I've seen her due to pre-amps in my mixing desk (meaning that with a good pre-amp, the sound is absolutely perfect ).
Without going to say that all microphones have to be like that, I would simply say that your instrument and your amp, it's really ideal.
Anyway, it's the Audio-Technica, ie the pro gear, and frankly for the micro (like its cousins ​​in the series Midnight Blue), spend a ridiculous amount (compared with "good" mics on the market) is a bargain.
I would do it chosen without a heartbeat.
Did you find this review helpful?yesno
»

sporniket's review (This content has been automatically translated from French)

I've had three days, I had taken his two sessions with my acoustic guitar, the sound is Fidler trs good.
MODEL m'intressais this because it is comparable to the Shure SM57 on the cheap. The seller said that the road was MB2k facing the SM57.

In addition, it comes with a cable, the support is flexible Contents provides a good support (now I must put my foot backwards because of microphones is too high compared my guitar)
Contents of "skin EHJV" the body of the microphone is enjoyable.

I would do this choice

Audio-Technica MB2k
5
Everything has been said in the opinion below.

I use it for 9 months.
I used to get my electric guitar amp in addition to other microphones.
I bought it out of curiosity. It was reported as rivaling the famous sm57, and at this price point, it does not cost much to take the risk.

At first glance, I was almost disappointed, then I got to know him. It is quite sensitive to placement. Well placed, it has nothing to envy a sm57.
After 6 months, I found it really interesting. And 9 months, later I found insane. In fact, ll just need to know the place.

The bottom spectrum slightly more light than the sm57 and it is already a big advantage for me. It does not overflow in all directions.
The low-medium is still in its huge! I do not realize was there before to get a good distortion pedal.
All the articulation of the lower medium is sensed, the palm-mutes are seized with force.
The medium and high treble typically have one side and slamming aggressive sm57 (A true happiness whistled for harmonics that are received with very good definition).

This micro eventually surprised, then sit down.
I couple before a RE 27 for rhythmic saturated, and now I use it alone.

In contrast, for leads and cleans sounds, I prefer him of the companionship of a RE27 and a ML-52.
A serious contender for the sm57 for less.

A small flaw, however I have not the explanation: it is VERY difficult to place, any misplaced and that the catamaran in phases with the other microphones. It's a shame, because for an affordable price, it makes a use that is not that much.

I tried other mics before this one, and often uses an Electro-Voice RE-27, and an Oktava ML52-02.
For cons, I bought it without testing it before, in order to test it, and I was very pleasantly surprised. It is ultimately a microphone that I use for my fairly systematically taken from his guitar.
And I look even buy me a second.

The price / quality ratio is very good, like all products out of Audio-Technica.

It is a choice that I could do it again, now that I know what it's worth.

I cut him off, however 2 points to the overall score for being too affinity phase.

Audio-Technica MB2k
4
I use these mics for the resumption of amps, snare and hihat.

Excellent on the transplanted guitar amp (live and studio), very good on snare and Charley.
I even make fun of the flute and oboe (for Oboe, was medium)

For the minus side: ATTENTION TO THE STAGE AND PLACEMENT.
What differentiates a SM 57, is that bin can not put it anywhere, it requires a certain discipline in the investment .... but hey, with practice, it goes fast.

In summary: do not hesitate and go for it! and at this price, if you have a crappy drummer who tends to bully your ben mics you can remain calm .....

See all 8 photos of Audio-Technica MB2k »