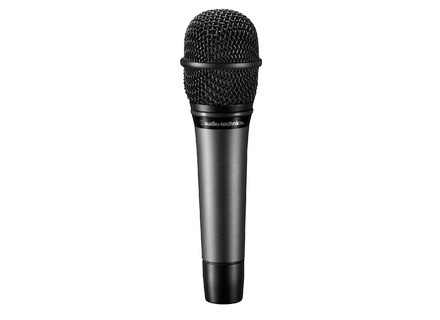 View all offers for Audio-Technica ATM610A »

This microphone does a great job with handling stage noises and rejecting it right along with feedback. It will also not pick up any sounds coming from the rear of the mic or from the sides of the microphone which makes it a great microphone for live shows because with so many other things going on and sounds coming from everywhere, it is easy for a “cheaper” microphone to pick up these sounds and kill your show. But the ATM610A does a great job rejecting those sounds giving a clean and clear vocal for your audience.
It has a mutli-stage grille that gives you great protection. When I purchase this microphone I got it in a bundle, I purchased the bundle with a bunch of other stuff and was not aware of which microphone I was getting with it. I did not even need a microphone at the time but after I opened it up and decided to try it I could not believe how great the ATM610A really was.
Overall, when choosing a live microphone you just need to remember a few things. Getting a mic that is great with feedback rejection and not picking up sounds from the rear or sides of the microphone is crucial. Having a mic that feels good in your hands and looks great are just bonuses. This microphone has all of those attributes and at a respectable price. It would have been nice if it would have came with a carrying pouch or case so I could store it properly, but I just use a generic case for it.