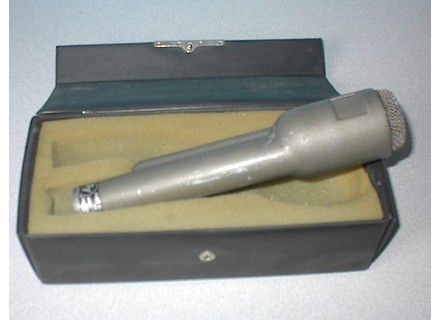 Electro-Voice 666
5
The ElectroVoice 666 is a vintage dynamic microphone that is suitable for a variety of applications.  I've only used the microphone in the recording studio and since it is old and fragile, I wouldn't recommend using it for anything else.  The microphone is built well and should last as long as you treat it well.

I first used the ElectroVoice 666 about six months ago and while it isn't my favorite dynamic microphones out there, it will definitely get the job done in a variety of different situations.  I've only used the microphone for recording drums and electric guitar, but it has excelled a great deal in both of these applications.  I found the mic to be quite effective on both the top and the bottom of a snare drum, and would probably work well on tom toms as well.  I was also able to get a full sound for electric guitar.  I used a Fender Strat and a '76 Fender Twin Reverb with an Ibanez Tube Screamer for some overdrive and was able to get a killer tone on record.  While the microphone has an interesting shape and design, I found it to be advantageous in a lot of ways as I was able to place the microphone easily and without problems.  The ElectroVoice 666 is quite rare and hard to find and probably wouldn't be a microphone that I would seek out myself as I only used it in a single recording studio.  I don't know too much about the price of this microphone since they are so few and far between, but I would imagine that if you did come across a used one that it wouldn't cost all an exurbanite amount of money.  Since they are hard to find, I can't say that I would recommend seeking one out, but if you do get a chance to use the 666 definitely experiment with it as you can get some really cool sounds.