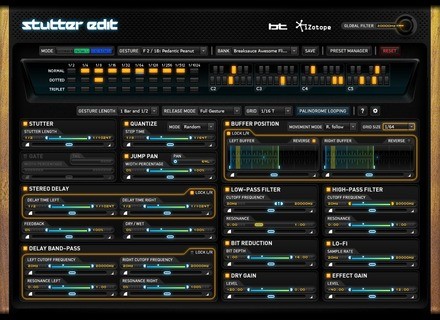 iZotope Stutter Edit
4
I use iZotope Stutter Edit Effects on my Windows PC running windows 7 and it works great and has never caused any issues in Ableton Live. I have also used it on my Mac studio computer and it works great there as well. You can use it as a VST with just about any audio editing or music composing software that is out and it is very stable and will not crash and burn on you. IZotope Stutter Edit Effects is a great plug in to have for your fills and transitions. Normally it would take me hours sometimes to have all of my effects a fills/ build ups. I feel like these are parts of songs that are over looked and they can really add some flare to your music or mixes. Using the Stutter Edit by iZotope has made this extremely easy for me and I am able to get it done way faster than I ever could. You can play effects like you can an instrument right on your MIDI controller, and everything is real time. The manual is easy to understand, but watching tutorials online is a lot better.

The iZotope Stutter Edit Effects works great, it has never caused any issues or concerns. I have been using it since January of this year, after purchasing it for a New Year software deal online. It has been a great purchase for me and cut hours off of my final mixing process with adding and editing effects and transitions. Its better than the glitch VST.

How easy it is and quick it is are my favorite things about it, some people compare it to glitch but to me its way better, it has a more user friendly interface and is a lot more efficient. The price to purchase this plug in is so low you just have to buy it. If they have a trial version online I suggest trying it out, you will be purchasing it soon!

iZotope Stutter Edit
5
There were no compatibility issues getting Izotope Stutter Edit up and running on my MacBook Pro in Ableton Live 8. The general configuration of the plugin is a bit confusing at first, but once the user realizes that the screen's parameters at any given time only affect one midi key it becomes much easier to maneuver through and set up a whole scale of sweet stutter, gating, and vinyl effects. As far as the plugin's particular parameters go, there are options for buffering the signal, delaying it, filtering it, bit-reducing it, gating it, and of course, stuttering it. Spend a couple hours studying and testing the interface and all of these options will be easily at your disposal.

So the way that I like to use this plugin is to pre-program all of the buttons on my Novation Launchpad, set it on one or a couple tracks, or the master track, and then trigger the effects live. Stutter Edit works perfectly with the User 1 interface of the Novation Launchpad and adds some really cool, very unique sounds to a song or set. I actually did an entire project for a digital music composition class on live manipulation of a continuous audio signal using Stutter Edit and it performed very well. This is my sixth month using the product and I can say that I am happily satisfied and haven't had to resort to other similar software or VSTs.

Overall Izotope Stutter Edit is a performance must have for electronic musicians who want to display expressive and clearly live signal manipulation. The effects sound great and are very flexible in their parameters. Having each key set to a different effect allows for as many options as one's midi controller or DAW can handle and the CPU usage isn't excessive. Lots of pros for very few cons. For the price, not too bad seeing as though there are limited cheap or freeware glitch VSTs available for Mac. Bottom line, if glitching out your signal is the goal you can't go wrong with Izotope's Stutter Edit.
Did you find this review helpful?yesno
»

iZotope Stutter Edit
5
I run this on a Macbook Pro with both Logic 9 and Ableton 8. There has been no compatibility issues whatsoever. Unfortunately I do not see any manual anywhere in the plugin or online. The general configuration is moderately complicated. If you have had no experience with stutter style plugins (i.e. Artillery 2) it may be a bit tricky. Some of the parameters are hard to understand but after playing with the unit for a few hours it starts to make a little more sense. I still have a few questions about a few of them and have been petitioning Izotope for some clear instructions. All the functions are easy enough to access. The entire plugin face represents one "key" or midi button at a time. What I mean is if you hit a key on your keyboard, all the parameters on the plugin that are shown attribute to that one key. Hit another key, and you start with a completely fresh setup.

With the programs mentioned above the plugin works perfectly. Not that much cpu is needed which is nice as I run lots of plugins in ableton at the same time. So far, I have found no bugs and have had zero crashes or lost presets. As for performance, I give this plugin a 10 out of 10. It sounds amazing, has tons of different options and is instantaneous. After lots of use of Artillery 2, I realized that sometimes there was a little latency and that would cause a stutter effect or other effect to kinda throw me off or make a little click sound. It was very slight but as any dj style performer can tell you, the little things like that will drive you nuts after awhile. With this plugin, it is as smooth as butter. I have been using this plugin for about two weeks and loving it!!

What I like most about this plugin is the amazing control you have over each parameter. One of my favorites is using the "Palindrome" feature which lets you set and use a reverse style effect. Its truly amazing for lowpass effects or just general reverse style effects and the grid that lets you shape and control it is very intuitive. I guess the only thing I don't like about the plugin is the parameters I still don't understand completely. Under each effect unit there is a slider that seems to tell the effect where to spend most of its time. Its hard to explain but say you have a stutter effect that bounces between 1/8 and 1/4 stutters. You can use this slider to tell the effect to stay on the 1/8 side more than the 1/4 side. So I guess it is an "averager" if that makes sense, but again, I'm still not entirely sure as it doesn't always perform the way I expect it to.
For how great this plugin is and stable for a version 1.0 release, I have to say its worth the $149 I paid. Precision and quality of the sound is spot on as I mentioned earlier. I used Sugar Bytes Artillery 2 for some time and was pretty happy with it, but this plugin does all that that one did and a ton more. Yes, I would definitely make the same choice.
Did you find this review helpful?yesno
»

iZotope Stutter Edit
4
The installation is done it without problems? yes The general configuration is easy? yes Have you experienced any incompatibilities? non

What is the configuration of your computer? I7 2600k 16g software he correctly on this configuration? yes This software + hardware is stable? yes

How long have you use it? 1 year was roughly What is the particular feature you like best and least? the more the effect is great! moin the force having a midi keyboard .......... and ableton to make an effect on an audio track you have to add a midi track

Did you find this review helpful?yesno
»
Read the 5 user reviews on the iZotope Stutter Edit »

Published on 02/20/15
These are new nice discounts iZotope is offering during a limited time on its Stutter Edit and BreakTweaker effects.

The iZotope bundles on sale

-60% off the iZotope Stutter Edit in September