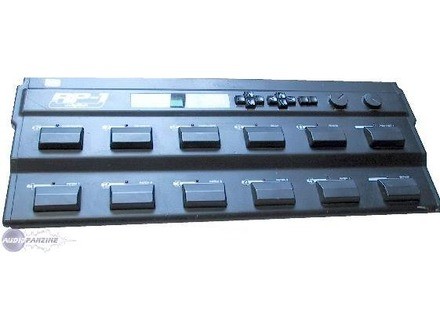 RP1, Multi-Effects for Electric Guitar from DigiTech in the RP series.

DigiTech RP1
5
Bought this effects box from EBAY for $50 USD. I wanted a sturdy multi-effects box that I could kick around a little.

Very sturdy, and doesn't move around on the stage when you're playing. You can move it with your foot, but it won't follow the cord......Also love the effects, especially the clean country effects. Digital delay is fantastic, separate preamp volume and gain controls are magnificent. Very durable, and easy to change effects, add effects, layer effects. Can be programmed from the computer as well, through midi interface. raunchy sounds really kick, too.

wish it had a foot pedal volume control and effect control, but for the price I surely cannot complain. Need to have the manual handy to remember the patches, but easy to change

excellent metal case, controls are sturdy, parameters are easy to work with, power supply is internal, and so just needs a power cord like a computer.

Definitely a top notch pedal. great for practice, stage, studio. Changing on the fly is seamless, with no buzz or pop

Configuration quite simple as long as you read the instructions (in French) and spend time maniper because there are many possibilities.
Ergonomic navigation.

I use a Fender Strat U.S. and a tube amp.
Part analog preamp (compressor, gate, distortion, EQ, volume, simulator HP) is very good programmable: no breath, acts to boost the compressor body and gives her the potato, it is well worth individual pedals, including included in distortions.
Digital effects are outdated and means (chorus and flanger frankly insufficient time and reverbs are a little better, but it lacks a vibrato / tremolo, and a wah pitch) making use of the RP1 only mediocre.

I bought my first RP1 nine in 1993 and as the screen fades, I have to buy a second hand April 94, in new condition for only 40 €! Why this duplication? I explain.
On the basis of a strato very versatile and a tube amp, I need to play with my group lead, many different sounds tacky repertoire rock, pop, country, etc ... about fifty pieces, sometimes with two different sounds for one piece; ear demanding I finalize each with its individual adjustment end of the whole chain from the guitar (micro switch, tone) to the amp (jack In low or Hi, gain, bright, equalizer, volume), through the effects of the different sounds to be properly leveled them so I better have a maximum of programmable parameters.
But if the effects are digital RP1 means making use only mediocre, the programmable analog preamp section is very good, not breathing, acts to boost the compressor gives body and potato sound.
So I placed the head of the line RP1 to a very good digital rack effects (TC Electronic GForce), which alone produces sounds less pêchus.
The RP1 allows me, in a single pedal to have 75 special settings (75 presets user) to a string consisting of a good analog preamp stage (especially compressor, distortion, and volume) associated with a program of digital rack controlled via MIDI, so I do not gymnastics manually adjust the settings buttons pedal compressor, distortion, boost, EQ and volume.
In addition, exchange and backup between 2 presets are provided RP1, easy and useful.
In summary, the RP1 is a rugged, ergonomic, which combines an excellent MIDI pedal and a good preamp / analog programmable effects.

ToniSkall's review (This content has been automatically translated from French)" Made in the USA!"

excel patch factory are famous (150 programs including 75 users)
for saturation, the big sound of today is not the appointment, but adding a good pedal for this purpose loop that pulls well

I use it for ten years and still works since birth

... 1 switch broke and I customized a little grunge (see photo)
I also use

By pedals or rack I have tried a lot of stuff over the years between the Line6 really means is that for my taste, Zoom I even speak, even last generations Digitech ... I deeply regret that too many brands tarnish their image with product Made in china ... unless they put the price (some Lexicon, TC electronc, Digitech) I will stay on my old RP1 which retains its identity sound made in USA ... that for a price today widely used and provide affordable, I'm just happy.