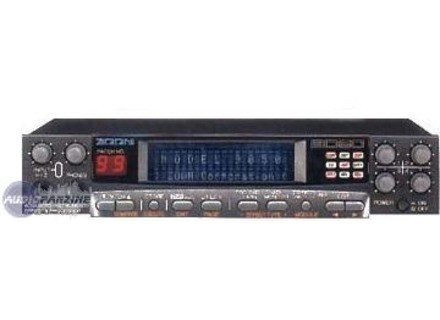 9050, Multi-Effects for Electric Guitar from Zoom.

dustud's review (This content has been automatically translated from French)

For the price do not hesitate
Did you find this review helpful?yesno
»

xibeb's review (This content has been automatically translated from French)

Zoom 9050
5
See the site either review this MODEL

I use this multi-effects for years and it saves me a lot of situations in the studio or live (like only yesterday to make scne the marriage of a musician friend). Trs loadings are good and clean sounds too ... I do not use tons of effects because they can be if dlicats determined (all effects in the mode strorpartissent its Ingala dte: left making questions to ask ing her in the studio!

).
Yesterday was the config scne zoom, a pdalier boss to change the patch and expression pedals for me rgler volume.
I used the zoom pdt 10 years in a group of heavy: happiness! Eg for "Symphony of Destruction" by Megadeth, I developed the intelligent harmonizer to simulate the 2nd gtr qd there was no 2nd scratch during the long life of this group (NAZCA, the island of the meeting). I used also to determine the degree of saturation in some passages dlicats for not playing on the knob of the gtr and change too much grain as it is a little weak this MLTFX. For the purposes of soli o I was looking for an infinite one note I could also change the% and the duration of the short rvb ... even in a patch, I used bcp capacity amendment in tps rels that suited me better than to change a piece pdt patch. I had in gnral 3 sounds: clean, rhythm and lead sounds + a + SFX with effects brand: Octaver, wha, leslie ... If the song was trs typ I changed to bank have 3 new sounds and presto! More importantly, the rapid editiopn tjs bluff me and as well served yesterday scne: patches programms home on the stereo are not suitable for live sound and you have to go quickly, especially as everyone know, everyone is tjs strss and loose because of the ton of emm arrivnet tjs who live on the: buzz, jack crappy, unexpected sounds off musician late for the balance ...

I find nothing wrong, it's not c'esst on my t ^ te JCM 800 4x12 but its important to DCON: for the price nothing better y'avait the era (I 3000fr touch the nine o era it was released.
One thing qd mm section compression "dies" with 9050 tps and all I know is this problem: in situ beginners chain, when a patch is used, it is the loss of voice ! then folds it remains that the shunt and resave the sound without the compressor ... I have 2 of 9050 and they have all the same 2 bp (the 2nd given by a friend because it This had already bp comp)

As I said above, I find it endearing trs, small and portable, easy pgmer, cheap Versatile ... .. I had the 9002 (first of the brand!) The 9030, which had a acoustic simulation that we could not find the ... 9050 and clear sounds even better, strangely, but was slightly less effective and, above all the noise he had not appeared on the reductor 9050 , trs effective e able to self adjust! on the other hand for rglages sensitive o CONTRL grain is sought on the saturation, it is best to remove it. If not Bourin, has the builds! I can not put sound sample on the site as did a memebrs of the zoom microphone with acoustic that just came out ... so a thousand words ... I grew also the cd of mo pdalier of 3030 I think is stunning, and rev Submitted by a good scratch I do not remember the name ... put online?
Did you find this review helpful?yesno
»

soopalonyon's review (This content has been automatically translated from French)

Zoom 9050
5
This is a real toolbox, there are all the classic effects (distortion, chorus, delay, ... more a good range of surprising effects as a Metalizer, not at all a realistic emulation of the sitar, but so much fun, filters to make a twisted sci-fi soundtrack).
Technology, I really know is not the lamps in any case.
No publisher computer (no interest due to the ease and speed to edit the device).
Everything you need is here in connection (audio input, stereo output to the MIDI dumps).
Rackable yes (supplied with the brackets signed "Zoom" for installation.

It's very simple: the 9050 has 2 banks of 100 patches each. Each patch can then be adjusted using a chain effect (memory: compressor-> distortion-> Noise-> EQ-> amp simulator-> fx1-> fx2-> Special FX-> reverb). The original sounds (200 so) give an interesting preview of the possibilities (large enough), but was quick to publish it as simple as the ideas come fast.
We arrive to find their way quickly into the architecture of this multi-effects, it's really one of his strengths, we do not waste time searching the manual for the slightest change.

In absolute terms, it is surely far from the quality of processors pros. For the price, I find that this machine offers sounds very honorable.
Personally, I use is very wide as it can be used to record my guitars (less often since I purchased a TonePort), voice synthesizers, or even (this is where I discovered late: some effects at the output of a synth really give a whole new dimension to the sound).
I had acquired at the time to replace a multi-purpose korg (A5?) Because the zoom has a pitch-shifter and harmonizer. I was never very convinced by the final effect. However, I really learned to use all other effects with this machine.
My favorite effects: the delays, reverbs (yes, I know why they are criticized by fiddling we manage to produce all colors), EQ (effective), phaser, tremolo and crunch (both on guitar, voice synthesizer that gives a special warmth to the sound).
Those that I never use: flanger (I find this too typed) hyperdrive (I liked 15 years, but good on its lack of precision, that drool and it lacks dynamics).

This is one of my oldest possessions in music (bought in 1993 I believe), it is also probably one of the ones I used most. There are plenty of machines much better no doubt, but what makes this one so endearing is, again, the speed with which you can edit sounds and variety of effects available. From this point of view, it is a good machine for a price today must be ridiculous.
I am a bit sentimental, my decision can not be very objective, it certainly gives her a little cold, according to the synthetic effects used, it can distort the original sound (is it what he application?) and produces background noise according to the effects enabled and intensity.
Still, I remain very attached and I still use it regularly now for my models. It is really ideal for recording anything when you want a specific well. I also used to boeuffer with friends with a guitar and it went very well for both traditional sounds to create atmosphere zarb (then add an expression pedal and en route to Jupiter).
A big flaw that makes use live complicated when changing patch with the original pedal, the sound cut for 1 / 4 of a second (if you change the sound during the same title, expect moments of silence to perform the operation smooth). I do not know if this delay is due to multi-effects or pedals.
As I said I had used a Korg multi-effects pedal with red and black integrated (but really practical low-end). The Zoom has opened new horizons at the time.
I do not know if I would do such a choice today with the information amount, effects pedals and other machines that I could buy later. But it never occurred to me the idea of ​​separating.
Did you find this review helpful?yesno
»

Zoom 9050
3
- What are the effects or types of effects available?
everything is possible except esprer whammy

- Are they ditables? Via an editor Mac / PC?
not

- Is this a rack or rack MODEL?
yes, but the specially designed one rglette a ct because it takes only half the rack width

- The configuration gnrale Is it easy?
means
- The edition of sounds and effects is it easy?
a will (in my memory)
- The manual is clear and sufficient? ...
such

- Effects are they effective, suitable and adequate ralistes?
not
- Which instruments do you use?
guitars
- What are those you prfrez, you dtest?
....

- How long have you use it?
I do not use, I keep it out of nostalgia. Otherwise, I make the purchase of secondhand in 1996
- What is the particular feature you like best and least?
I liked him the era, c'tait my first multi-purpose and open horizons sound
- Have you tried many other models before acqurir?
not
- How do you report qualitprix?
for now, bad. In the era, plutt good.
- With the exprience, you do again this choice? ...
Today, no, but we must put things in perspective.