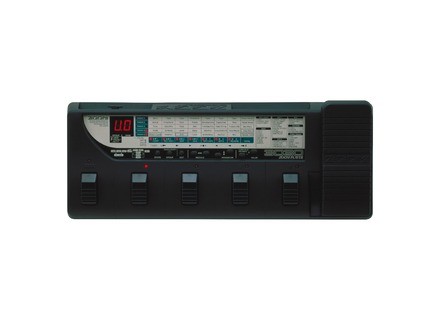 3030, Multi-Effects for Electric Guitar from Zoom.

Zoom 3030
3
I paid about 130$ for it. It is basicly: four pedals-to save, and use preloaded, sounds on.
one "bank pedal"- to load up the sounds.
and one volume/effect pedal-to change either the effect or the volume of the sound you have choosen. It can save up to 32 effects!

I think i'ts' pretty handy and simple to use, and the preloaded sounds are quite good.

Unfortantly it takes away some of the sound in the amp./speakers ect. you are using and the quality i'ts way from good enough.

The construction and design is quite nice and smooth, but as I said, the quality of it to "cheap".

I think i'ts a totally ok investment. This is no proffesional gear, but good enough for a beginner..!

Zoom 3030
2
I bought the Zoom 3030 from Musician's Friend magazine for around $250 when it was fairly new on the scene. Since then, the price has lowered some. Musician's Friend ran an article about the processor and recommended it, and that was what convinced me to purchase it.

The pedal has all the important effects like wah-wah, distortions, flanger, phaser, reverbs, chorus, and tap-tempo delay (which is nice when you want to really line the delay up with the song.) Then it's got some pretty neat stuff like an auto-harmonizer, which will play harmony with you in a specified key, major and minor, and the amp simulators. Another cool effect is a slow fade which reproduces the sound of a bowed instrument like a cello.

While there are several distortions to choose from, there are only a couple of high quality ones. The metal distortion is so overdriven that it sounds like the dying engine of an old diesel truck. The harmonizer frequently sounds out of tune. The phaser and flanger are disappointing, too. I think the biggest disappointment of all was how quickly the thing fell apart.

I had to repair the guitar input, the output jack, and I repaired the power input three times. The first patch pedal no longer works at all, and the expression pedal doesn't work correctly. The edit button now requires enough pressure to break your finger, but it still works. Now, keep in mind that I have used this processor every single day since I had it, and I have taken it to several gigs, but if the lead guitarist for my band didn't happen to be an electronics technician, I would have spent twice as much repairing it as I did just to buy it. The main problem is, it's made of plastic. The underneath is a metal plate, but the surface is plastic. Imagine what happens to plastic when you stomp on it over, and over, and over....

I wouldn't recommend this processor. In fact, I don't like a whole lot of anything that Zoom has manufactured. The other guitarist in my band owned a Zoom 4040, and he made at least as many repairs to it as I did to mine. Plastic processors fall apart. Or maybe it's just Zoom. I would recommend you go out and buy a nice metal Roland, Digitech, or BOSS. Or, speaking of BOSS, just stick to the old stomp boxes.

Zoom 3030
4
The Zoom 3030 is a multi-effects processor that I have used for both electric guitar and bass guitar, although it is designed for electric guitar.  The pedal is digitally based and has all sorts of effects ranging from EQ to distortion to delay.  It has standard 1/4 inch connections and I have powered it with a Zoom power supply, which I think it 9 volts but I'm not entirely sure.  The pedal has five buttons to recall presets and user saved effects and isn't rackable as it is a pedal.

Using the Zoom 3030 can actually be a little tricky at times, but the basic features are easy to access.  The only confusing part of the 3030 comes when I am navigating through the different windows as I find that it can be easy to get lost.  This being said, it is easy enough to get your basic effects and to manipulate and save them in your own way, which is the main thing that I wanted to do with this pedal.  I've never seen a manual for this pedal but would recommend taking a look at it if you have it.

While the Zoom 3030 is primarily seen as a multi-effects unit for guitar, I have used this primarily with bass.  There are certain effects on the Zoom 3030 that I like better than others, but for the most part the sounds are surprisingly pretty decent.  I definitely like the modulation and delay effects the best, but the EQ, compression, and reverbs are also useful.  I'm not a fan of the distortion tones on this at all and would recommend staying away from them.  You've got all sorts of modulation effects, most of which are good sounding and I find useful.  While I wouldn't say that the sound quality of this pedal is good enough to record with, for live shows or for getting your feet wet with effects, the Zoom 3030 will get the job done.

All in all, I have to say that I was surprised to find that the Zoom 3030 has some useful features.  It is great to be able to make my own sounds and recall them with a push of the button.  I'd recommend this pedal for those looking for a cheap used multi-effects pedal for either guitar or bass guitar for use during shows or practicing.  If you are looking for effects to record with however, I would look elsewhere as I don't think that the Zoom 3030 sounds realistic enough to put onto tape...

It sails on the pdalier, which is not very instinctive, but anything is possible! ... it's okay once you understand the logic of dveloppeurs!

So l. .. is death ... I do not know if I can be objective, but I dtest the pdaliers at their saturation excrable my taste ... they stink , musty, damp of a transistor are clear ... for it is better but ... it's not madness ... by either against the effects are correct (delay, reverb etc.).

I'll be mchants, but we always Zoom are very regular at transistor dead! just plug a scraper to understand rponse games and listen to your exact very mdiocre.
short as these competitors digitech and boss ... even better when that s'entire!

Did you find this review helpful?yesno
»
Read the 6 user reviews on the Zoom 3030 »

Zoom 3030 manuals and other files