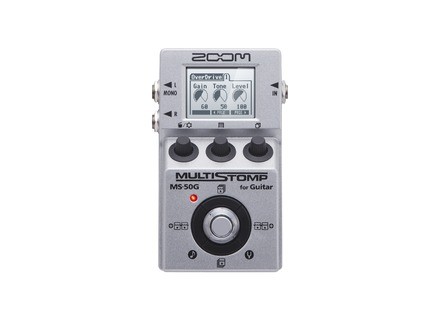 MultiStomp MS-50G, Multi-Effects for Electric Guitar from Zoom in the MS series.

gvpower's review (This content has been automatically translated from French)" Pédal a full board in a standard size pedal!"

Zoom MultiStomp MS-50G
4
Here we have a whole pannel effects at our disposal,
each with specific and very audible settings.
you can download a higher version that improves the amount of effects.
the digital processor is powerful enough and must shield effects to arrive at the end.
there are 2 outputs jacks, a guitar input jack, but no headphone output ...

So to summarize, you should still read the manual which is made elsewhere,
but once you grasp interface, it rolls alone!
there are 3 knobs control that are clickable, and 4 buttons around the main switch,
to navigate through the menus and sounds pédal board.
it is so easy to add a pedal and change, on the other hand you need to think
recording its config, otherwise it is lost in the next relighting ...
Moreover, in this connection I highly recommend that you disable the "auto-save" function
which is very painful when you try several sounds, it annoys soon! ! !

Live conditions, it is well known, and if necessary, bend down to change the patch.
if there is a method provided for this purpose, and each press of the switch, it changes as its
had programmed Paravant, and arrived at last, it loops back to the first.
(Not put 150 patches, because if you want to quickly return to number 2 ...)

I found the sound quality improvement reports by multi generational effects
previous.
I also put a plus for the noise gate, which is really effective and really limit the breath.
before in my live for 2 or 3 songs set, I had an acoustic guitar, and now with this pedal, the sound emulated is really realistic and suits me perfectly.

The Distos are generally not great, the Overdrivres are best done for my taste.
Concernants the Phaser / Chorus / Flanger, eaten, it's great!
The amp sims are great, I love it.
Reverbs / Delays really worked summers and it means, extra!
Other effects of all kinds, are nice but I did not used too.

The presets are for me, really nazes and not useful, it goes in all directions, there's no categories, everything is mixed, in short, no interest.

I use it for 4 months in my config "Guitar pedal-amp" + my pedal control amp.
and I must say that when I turn the distortion on my amp, it quickly becomes quite messy.
This is really handy for those like me who do not want any pedals because I
already that of control amp is 60cm wide ...
In addition you can integrate a true pedal-board!
I love his versatility, sound quality, ease of handling.
I do not like the presets, no headphone jack.
and YES I remake this choice! ! !

Zoom MultiStomp MS-50G
4
The effects are full Chorus, reverb, delay, Simul amps, Compress, gate again with the update V2.01 casiment we get the total of G3 inconveniant the distortion are not very warm.

The modulation effects are fabulous, the effective delay, reverb clean, the distortion is the only negative point not warm enough, the other as a compaais eletronic tc nova system or distortion is a treat, but it is ok if you are a hack little.

This is a handy little multi pedalboard but for the sole use and better. Integrated stuck in a loop to a reverb, delay and chorus is perfect because it is vraiement his forte.

Zoom MultiStomp MS-50G
5
Solid case and actually not that ugly aluminum. LCD easy to read (and even more than the zoom G3) and does not dazzle. Footswitch very solid. We really feel that this pedal is here to stay.
Well if it is a digital multi-effect that can handle up to 6 effects / simulation preamps at once. Just that

We quickly understand how everything works, even without the manual. The general issue is rather simple.

The effects that interest me are excellent reverbs and delays. In addition you can put them "trails" and assign the tap tempo. The Zoom G3 could not. Needless to say, I'm thrilled. Especially they sound awfully good.
I'm mostly used to the analog delays (such bucket brigade), but I recently owned a Strymon Brigadier ... I quickly sold it because it just sounded better than the simulation of analog delay my Zoom G3.
However, it has the MS50G of delays with "trails" or "spillover" and self-oscillation: all that was missing in G3. Anyway, I do not know what gives the Strymon El Capistan, but I think it is really silly to spend 300 euros in a Brigadier than 100 in MS50G (which can chain 6 more delays).
Overall modulations are excellent.
Surprisingly, some distos / overdrive / amp sims are quite correct. Yet it is on digital.
Other effects are more or less interesting. But overall octave / Harmonizers etc. are not great, but passable (as a boss for example). Forgetting polyphony, as on many of these devices.
Also I do not notice coloring my signal, or any loss of momentum. So the bypass is good.

This is the best Swiss Army knife now!
I use it since yesterday, but I was for several months the Zoom G3 is almost the same thing bigger.
It completely bury the range of Line 6 M5, M9, etc.. The footswitch is better, the effects can be used at the same time more, most compact, and overall effects are better.

If we compare the MS50G and Zoom G3
Zoom MS50G:
- Much smaller!
- Reverbs and delays thus have "trails", which is not the case on the G3
- It includes a tap tempo
- The screen is even more readable (change in favor of a cooler color that enhances contrast)
Zoom G3
- Greater impact on the 50G
- Drum
- Looper
- An input for an expression pedal or a tap tempo

PS: Bax-shop.fr, he is 95th in pdf. This is the best price I found in the store

SlapKid's review (This content has been automatically translated from French)" Re-dou-table!"

Zoom MultiStomp MS-50G
5
I was looking for my zt lunchbox one minimachin looké same, bingo. As against this issue is much more ergonomic galley!

No headphone output (master volume not seen either) or pedal input expression, but normal two jack outputs, great for the stereo capabilities of the beast.

The screen is lit more than me, and you can name the presets (which I think should be mandatory).
Two AA batteries are enough to turn the machine, one perf.
Usb socket that I never serve, old school muzikos ...

Around the footswitch are 4 switches for pagination in effect and blocks the effects of said blocks.
Of course a lot of hidden features / multi assignable etc..
The value is the inverse of fender products, sidereal here.

Well, I took some time to capture the basic navigation (select a preset, for example) but what effect is intuitive, there are several blocks available type comp / distortion / delay / reverb, perhaps more can be less (more reverb hd food processor).
What I love is that thing remembers effects not activated in a preset, and the block to put on-off selected. So when the patch is called the footswitch is already ready to engage / disengage the delay, for example, it saves time / lag / place and known or is. Practice.

There is a staggering amount of effects, sounds and more. I am intrigued by some as the line selector block, not yet had the time.

It's smarter than it seems in fact, and you can assign the footswitch to turn a series of patches that selects very easily.
The three potentiometers are notched endless, and you can press it. This is great.

Until two weeks used in home studio headphones, and a week in a local VOX AC15 (without channel equalization).
The headphone signal to noise ratio is very good, it's clean without being dry. The stereo is falling, although the wide pong delays example, and gives seasick on the chorus or panners.
The amp models are juicy, a hair metal anyway, but too many parameters affect the ease of use.

The vox to good volume, zoom functions as a pedal board (compressor, od / dist, delay, reverb) without amp modeling or EQ, just to stay on board master.
It's fantastic sound quality unimaginable a few years earlier and I mean not even the price. I stay with ds1 as distortion and overdrive as od + and the result is warm and natural. I must say that the vox cheating disagree, but the fact that it has no equalizer speaks volumes about the quality coming out of ms50g ...

Horrifying at baseline (disable autosave, you will live older) but once it got it's great, and naming presets can make several sets (one for vox, one for zt, one for the studio etc.) without mixing brushes.

I repeat for the lunchbox just made presets for vox, adding a block equalizer saw the size of the zt ...
So the investment of time of departure will quickly be amortized as want?

And if it is via computer is even more obvious hack.

Do not throw more short, if it's too easy as there is direct access g3 I think, and I feel that preparing a zoom shot, judging by the new A3, so expect maybe a bit !
In fact I also took G2Nu for its ease of operation and superior headphone, and I have the impression that the sound quality is not as good as ms50g is more clutter in whole.

Did you find this review helpful?yesno
»
Read the 5 user reviews on the Zoom MultiStomp MS-50G »