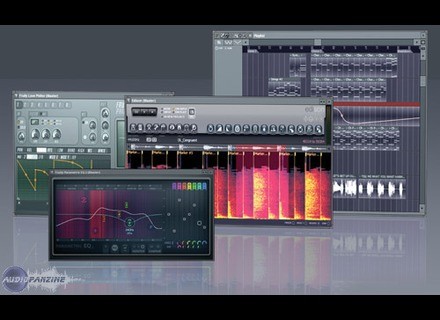 Image Line FL Studio 7
5
Image Line Fruity Loops Studio 7 was easy to install without any problems or compatibility issues at all. Since installation, I have never had an issue with this software and it has always run smoothly for me. The interface of the software is easy to follow and is very user friendly. I don't have the manual for Fruity Loops Studio 7, so I can't speak to how helpful it is when trying to learn this software. However, there are a lot of ins and outs of this software and I can definitely see how having a manual around would be helpful.

I am currently running Fruity Loops Studio 7 on a Mac Book Pro that has a 2.2 Ghz Intel Core 2 Duo processor and 4 GB of RAM. I have also ran Fruity Loops on a Hewlett Packard laptop, and with either of these set ups, I have never had a problem running as many tracks on this sequencer at once as I would like. It has always run stably for me, which is a big reason that I enjoy using this software so much because I never have to worry about it breaking down on me.

I've been using Image Line Fruity Loops Studio 7 for about a year and have found it to be a great piece of software when it comes to using MIDI instruments and making drum patterns and loops. It is easy to use and its overall user friendly interface makes it a viable option for all users interested with all any type of experience. Even though it is user friendly, it does not sacrifice its capabilities and is still an extremely powerful piece of software. Whether you are looking for something to make full fledged MIDI pieces, or just to get ideas and make demos, this is a great piece of software. The price is extremely reasonable, and is great for home studio owners looking for a great MIDI sequencer. Overall, I highly recommend Image Line Fruity Loops Studio 7 to anyone interested in a cheap and easy to use MIDI software.
Did you find this review helpful?yesno
»

thorfin666's review (This content has been automatically translated from French)

Image Line FL Studio 7
4
- Installation is it done without problem?
No problem.
- Have you encountered the incompatibilits?
None.
- Is Gnrale configuration is easy?
Yes very simple.

- What is the configuration of your computer?

Regardless cracking when going over 16 track at the same time or no problems, I was trying on a Sempron 3000+ 2 GHz and cons for it is impossible.

- How long have you use it?
1year
- What is the particular feature you like best and least?
+ Very simple, perfect for the lctro, THECNO hardcore and even the Industrial music if we can change a sound.
-It Ny not many sounds my taste.
- Have you tried many other models before acqurir?
Not
- How do you report qualitprix?
Very good.
- With the exprience, you do again this choice ...?
Yes.
Did you find this review helpful?yesno
»

H-SIK's review (This content has been automatically translated from French)

Image Line FL Studio 7
5
- Installation is it without problem?
installing fruity loops productcer edition took place on the net, update date for the software, everything went well. the site server is optimized for quick updates downloads, no problem, in less than 5 minutes. Can I pay this software on the net, everything is security. a day or two days later I received the confimation of my purchase, then the ACCS software "achetquot;.

- Have you experienced any incompatibility?
no conflict

- The configuration gnrale is easy?
in less than thirty seconds for the habitus, I think fondamentelement at the config nothing has changed. it's really the main asset of fruity loops, is very intuitive.

- The manual is clear and sufficient? ...
a manual is for the french grip, and the manual function is English. I think the vocabulary in English is not very hard. So for those who have difficlts, I think it's accssible, but hey ca are only my opinion.

- What is the configuration of your computer? (Motherboard / CPU / Ram / Disk / sound card ..)
my setup is a laptop acer travelmate 4050, pentium m 1.5 512 RAM and a hard disk of a 60g + 80g external sound card edirol ua 25. I still advise a little more than minimum 1gig ram. but also must maximize his computer for windowsiens.

- The software works he correctly on this configuration?
like I said, it is oprer a change, I will not do in trs long time, while keeping the same phone (put it in first 2 gigabytes of RAM). But apart from that, the config works well, I make very often export audio, allowing for the CPU allger.

- What performance? (If quantifiable)
I can turn over 10 patterns at the same time, but biensur with vst intrument of origin (or vst asking too much to cpu) and fx as well. any way, any dpendra, the vst intruments that you apply.

- This software + hardware configuration is stable?

sometimes the cpu can be very quickly dbord.

- How long have you use it?
I have been using The beginning of February. but I know this software for 4 years.

- What is the particular feature you like best and least?
as I said, I think that fruity loops is a fabulous tool intuitive, but is not yet a squenceur gnraliste (it's still my opinion j'espre I'm wrong, tell the self). the sound is rather unusual with its gnration becoming increasingly intrrssant (32bit internally). He named the new editor dison, which exelant work. fx new (and Love Philter Parametric EQ2) contribute significantly, a logical evolution of fruity loops.

- Have you tried many other models before acqurir?
yes, I also think acqurir other programs such as Ableton Live and I have a lite version of sonar.

Shake's review (This content has been automatically translated from French)

Image Line FL Studio 7
5
- The installation is done it without problems?

Yes, as you can not configure much lol ^ ^

It is absolutely not clear from that goes into the technical issues (sync, etc.). But it is very well done to the basic functions, we find what we want in two seconds.

A shuttle athlon in three years ago. The poor animal is no longer the stroke, it will be replaced this week by a large core duo full of very hairy ventilos.

It depends what you want. A note on FL: it is light, yes. 2% of consolidated load, it's cool. But robustness is the disaster level, once you load a little silly the consolidated amounts to 80%, it cracks, it screams of buzz when it stops recording after finally it is not time. Load the same in Sonar or Logic Audio fire (fire as I said I would never pass on mac, even for my late Logic), that does not flinch. Basically I am almost forced to change PC to run fruity, the world upside down ^ ^

- What performance? (If quantifiable)

Not quantifiable. If we account fgdhsjhdsgfSCRRRRR per minute at 70% of consolidated, it must be to 10 points ...

There by against, nothing to say, it screams, it discharges the buffer, it kneads the tweeter when it's not happy, but it does not crash, but ja!

The most: the notepad of the future. Take a guy who has a workflow patient with MPC, like twelve years of experience and show them how you shifter 40 samples to the tempo cuts with surgical tobiniennes in three minutes. Protect MPC quickly and prevent it from going through the window is that it is expensive these animals.

Second least: damn, gentlemen image in-line, we are in 2007, midi controllers have democratized, so he'll have to move! No feedback of information, not automation of mute / solo ... impossible to connect a controller on that, you lose less time with the mouse.

No. Fruity Fruity is the only one I know. There's Reason too but it's too close for me, and the appearance of pseudo hardware is not my thing, I turn on a PC not to plug the cables ^ ^

Unbelievable. Something like 100 euros, free for life SHIFT finally this thing is crazy, any plugin is worth more than this app that I use every day!

There is no alternative, young padawan. If you want to torture the sample, you must use fruity ... this is your destiny.
Did you find this review helpful?yesno
»
Read the 6 user reviews on the Image Line FL Studio 7 »