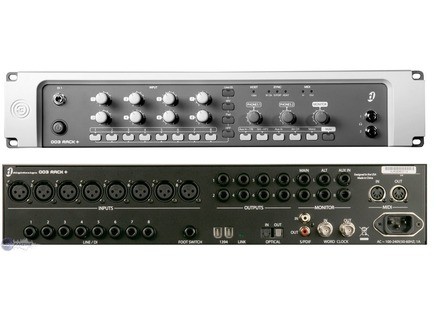 patou83's review (This content has been automatically translated from French)

Digidesign 003 Rack+ Factory
3
I chose this card to upgrade my home studio since I had the first Mbox.

I use almost all connectivity since I use the 8 inputs and outputs to be able to pluger all my machines: reverbs, expanders ... The two headphone outputs are very useful when I Zik on a boss with my co-producer when my Nana snoozing

I also use the spdif to attack with a Tc Electronic Finalizer 96k.

All is running with a MacPro Quad Core 2.8 and 6GB of RAM on Protools 9. I do not move to the 10 (I boycott a little pompous philosophy of money Avid)

The drivers are stable on condition of course be up to date, all updates available on the Avid site according to your OS or your version of protools, check! The software I use most often is Protools. Sometimes I work on Live, soft on which I will hand me greatly. Can be recorded simultaneously with the 003 8 tracks, expandable to 16 with an external ADAT card.
With respect to latency, it is void if I go down Quazi has 128 buffer, something I find a shame but still good ...

Easy installation! No need for manual except protools course! Needless to post questions every day, read the instructions it will not hurt already! The manual is clear and the book protools certif 101, 110, 201, 210 ... ect ect can you sooooo useful!

I use it for 8 years, I tested a lot of different machines through my taff and I do not think I will ever buy this today, I was at the time blocked by Protools LE compatibility issues / Digidesign. What I like: ease of use. What I like least: as soon as one looks for the little beast by putting a micro analysis, we realize that the two output channels are not the same color. Same result in headphone and we are lucky to have had a 600euros. I reassure the detractors, several friends have had the same problems with this model as well as 002! SCANDALOUS for the price of the beast!

KaeRZed's review (This content has been automatically translated from French)" For audio only!"

Digidesign 003 Rack+ Factory
4
What motivated my purchase (or rather my purchase request from my manager) was the number of analog inputs (with preamps if needed) and ProTools compatibility so you can at work hand in hand studio with the 'home' of the box.
I was on a PC with Windows XP and, depending on project needs, I use it with Cubase 5, Reason 4.0, Soundforge 10 and ProTools LE8.
The analog inputs allow me to plug in a microphone (AT2020) and hardware synths (Kurzweil PC361, Korg R3 and Roland V-Synth XT) being able to do without mixer.
The outputs 1 / 2 were connected to monitoring on a pair of Mackie HR824Mk2. The two headphone outputs were also used for a comparative listening Sennheiser HD-25 and a Beyerdynamic DT-770 Pro.
The entry 'to' line out of the received audio chip integrated on the motherboard so you can quickly switch between the 'computer music' and the 'Windows'.

Drivers are more stable. From memory, I do not remember being faced with untimely crashes, no glitches or clicks. What is rather clear for FireWire PC Device ...
Question software, these were mainly Sound Design (Soundforge), musical composition (ProTools, Cubase, Reason) and post-production of video trailers (Cubase). Finally, the absence of latency compensation on the LE version of ProTools me very quickly using Cubase DAW principal. Especially since, for the use, collaborations with internal studio were anecdotal, see accidental ...
I had no worries on the side audio. on the other hand, for MIDI is something else ... I regularly Notes blocked. It was enough time to replay the note and blocked, most of the time, it will unlock all alone ... It was as if the message 'Note Off' were sometimes difficult to be sent.
Fortunately, the synths had used a MIDI interface / USB integrated in order to circumvent the problem. I saw myself badly to see my head for him to order a MIDI / USB to 40 euros to overcome the shortcomings of the sound card that he had paid € 1500!
This 'small' problem is drop my rating of 'very good' to 'correct'.

I had a trouble with my ProTools CD that did not work. And without it, no installation possible. Luckily I had colleagues who have generously lent cool their installation CD. Otherwise, I was good to wait several days before receiving a new disk.
It is not death, but given the price of the machine, it's not very serious ...
Once installed, no worries.
The problem is my CD go the note of 'very good' to 'correct'.

I do not use more (completed).
Since little work done on ProTools, so do it again, I would take another model as good and less expensive (since not DigiDesign), gender RME.
However, I really liked the ergonomics of the front of the rack: very intuitive and well thought out. Activate the high pass on the R3 or the microphone phantom power takes 2 clicks ... Really well.
The Aux input is also handy. The connector is serious. Frankly, hardware point of view, no complaints.

In fact, my disappointment comes more from the side too 'Light' of ProTools LE and problems with MIDI.

Like any Digidesign hardware, I find that the price / quality ratio is not at the top: you pay the brand.
But if we bump on ProTools and only in audio, it really does the job well.

ingeson34's review (This content has been automatically translated from French)" Very good interface!"

Used with protools 8, 9 and 10, no worries
The drivers are up to date
Record up to 16 tracks simultaneously
Reading, my faith, I do not know if the limit of 10 protools
0 latency with low latency monitoring protools.
recording 24 bit/96Khz

I'm really happy.
The next step is the protools HD so ...
It will change equipment

Published on 10/05/08
Digidesign hasunveiled the third and newest member of its Digidesign 003 family: 003 Rack+ Factory.