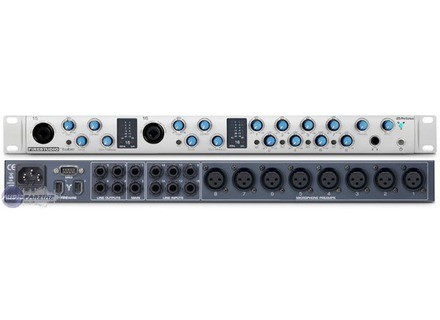 Robin Schneider's review (This content has been automatically translated from French)" UFO interesting."

PreSonus FireStudio Tube
4
I wanted a firewire interface with a maximum input microphones.
Most such interfaces offer 4 or 8 mic preamps.
It proposed in 10 2 with output lamp.

Drivers work without problems. I use it with Logic Pro 9 in parallel with a UA Apollo (which I acquired after the presonus).
Latency is about 12ms with a buffer 128.

I've recorded 14 tracks simultaneously with. In contrast, the buffers can be overloaded when connected to the Apollo causing cracking output (not input thankfully).

Drivers are still updated even if the interface is no longer produced.

Software mixing / routing is supplied with simple and effective.

I use it for 3 years now. It was the center of my configuration before being replaced by Apollo.

Its main advantage is to provide 10 microphone inputs, two lamp (it's not top lamp, but it can offer a different sound). This allowed me to save groups or make good with battery taken.

This is a good quality / price ratio is obtained and what to do sound very correct. I still use when I need to save a group and the 8 analog inputs of my Apollo is not enough. By spreading out the entries we get a very satisfactory.

I particularly regret the absence of I / O ADAT which would have made life easier, but at the same time was not entirely useful because the target audience.

Given the context of the purchase of this card, I would do this choice without problems.
It has no equivalent on the market today (10 mic on a firewire card 1U).

jbjovi's review (This content has been automatically translated from French)

PreSonus FireStudio Tube
5
- What characteristics have motivated your choice?

All, but especially the 16 live inputs for decision and decision batteries. The quality (and level) of preamp inputs and 2 lamp.

From the home studio and especially taken essetiellement batteries which caused problems with my firebox.

- Which instruments and systems (console, preamp, DTD ...) you use it and how connections? ...

For now, I have taken almost as micro direct (static and dynamic). I also recorded live on a low input tube and a pod (entered online for the latter)

- The installation is done it without problems?

On that side, nothing wrong, it's just childish to use.

First, it is in English, personally, I'm not pose a problem but it can be problematic for others so ... I think it does absolutely nothing. No mansion of Safe mode for example ...

- The drivers are stable?

If you have read the beginning of my opinion, you know not. Nothing dramatic (I could use it all weekend without any problems) but this is a list of concerns faced:

- Plantage very rare but still crash Cubase SX3
- Using Safe mode 1 instead of the normal mode (which're not, normal ...)
- Obligation to reset the card in cubase at each change of project (it takes two seconds but it's still boring).

- Are they often updated?

Knowing presonus, and as they have eight months to release the vista driver for the firebox, it is clear that the answer is no.

I do not know but the three musicians recorded the pros I have nothing WE noted this point of view. Imperceptible in any case (and I would say between 4 and 6 ms)

The maximum was 10 until now, but I'm sure you can save the hassle-free 16.

1 week with a weekend of intense 4 days.

Most is the number entered. The least that the young drivers.

Not in this Cathegory. But I have used for over 2 years and a firebox of course, the difference in quality is undeniable (as is the price!).

Unbeatable with this level of quality and equipment. Note also the software package and plug in high quality comes with the card.

Despite the concerns of stability, without hesitation.

kosh's review (This content has been automatically translated from French)

PreSonus FireStudio Tube
5
What technical specifications motivated your choice?
16 between the biensr!
For what purpose?
ba to record 16 tracks at the same time!
What is your config?
quad Q 6600 4 GB Ram
Which instruments or Systmes?
mpc, asr, eps, su700 and synthetic, micro ...

Installation is no problem it?
no problem in 10 minutes it was done
Have you experienced any incompatibility?
with media player, vlc needs to be good and c
Gnrale configuration is easy?
too simple, three safe mode and normal mode, a set of child
The manual is clear and sufficient?
I do not know I did not even open!

Stbles drivers, I had no crashes
I do not know if the drivers are updated
orion, acid, cubase, adobe audition.
Buffer size 256
14 tracks at the same time I have not tried more

1 month
record full of tracks at the same time
yes, rm, emu 1820 m, yamaha n12
excellent value for money offering 16 free tracks adat has this price? person
yes I would do this choice

Francisjurdan's review (This content has been automatically translated from French)

- For what purpose?
project studio, live on your mobile.

- What is your config (motherboard / CPU / Ram / Hard ,...)?
Well above the characteristic dsign compatible.


- Which instruments or Systmes (console, prampli, DTD ...) you use it and how connections? ...
In all, c ca same primary function ...

- Installation is it without problem?

A real ordeal. my first card comes down (it should still one week to find out because everything seemed to go but the firewire connection).
then he still had to buy another firewire card for it to hold more than 3 seconds. Further obligation to go on the net look for the latest drivers (one pc music should not have the net and anti virus ... comsumption resources).
Compulsory purchase of a longer cable (the 50 meter home is stingy in this use).
- Have you experienced any incompatibility?

tons that are not yet fully RULES.
No 64-bit driver, monster firewire instability, difficulty in changing the clock ...

- The configuration gnrale is easy?

Once it works, yes. even interface too "simplistic" sometimes.
- The manual is clear and sufficient? ...

Yes to dpart, but they talk about 8 outputs (there are 6) output numrique (none)
rglages of which are no longer in the latest drivers (yet essential) ...

- The drivers are stable?
Not really. C over a windows problem, which picks up the firewire driver itself.
- Are they often put day?
And it is not known from PreSonus. T they put forced to make a day .. but we expect more.
- What software do you use most often?

Cubase VST 32, and SX
- What you get lag?
200 ms if I want my own Pianoteq. with an EMU 0404 in the same machine I was 3 ms descent (he is decidedly the firewire better than PCI?)
And with a TonePort USB! I still 7ms in the same conditions. VRAIMNT there a problem.

- How many tracks you get record / playback simultanment? ...
75 read without problems
12 recording (maybe more)

- How long have you use it?
3 months now with 2 effeectifs, the other to solve problems.

- What is the particular feature you like best and least?
+ + + Sound very clean and well beyond what can be expected that price.
a cold and nothing compared mtalique c EMU but fairly straight.
tube (attention diafonie as a tube for 2 entries) is not a gadget.
He snores in the lower as expected tubes that heat up the sound (this compensates for the slight cold I find)
a Moitiers c cool. after it starts to deform. ca c and heater recess may not be ideal for a PC sound card to have this ever-TURN?
The connection is not doubled (XLR jack) but everything is symtrique, and nuts have jack box (unlike MOTU scary when you plug a jack move as ca)
Limiting practical and effective (c rare for stress) instrument inputs, level of 8 micro vehicle entrances at the front, two entrees of meter tubes, notched button ...

It was a mixing desk output pairs, each of 18 slices
This allows you to see a pair of output 1 and output all entries.
BUT if you need to see the 8 outputs, then one has only read 10 of vehicle entrances. c short, too short and stupid enough as easy argler software point of view.
ale, blinding blue LEDs.


when taken in front of a branch it is difficult to read and see the meters. You really get close.


JUST gain on mic (no micro tape sniff) and 20db in the last milimetres attention.
firewire cable ridiculously short.
numerical noise in the headphone outputs including ca not pro at all even if it is fortunately not recorded.
control panel which can not be left to an exit but always in pairs. there is no 8 outputs, but three pairs and a headphone that can be NUANCE size.
the patch mix is ​​clean (it takes up space) is the rule that the clock (and not elsewhere, you can not do it in cubase asio or other aplications.
frequency clock sometimes impossible to change. She mixes 48KHz files in 44K and I can not change.
in fact if the WDM driver is active, the ASIO driver may not arrive to change the clock.
It&#39;s infuriating when working with pros.

conclusion, it sounds very good (for its price) I have doubts about the firewire and Windows;
Consumption of resources for non ngligeable low latency.
But I&#39;m sure that was delivered from the cable longer, everything can be settled by software and if it is there will presonus interface hell.

The software package provides is interesting for a "non equipquot;
but using live prvue falls into the water
I imagine n&#39;oe connect five different laptops, and soft drinks are a pound to activate on a single machine. farewell live unless I carry my tower and all the make-up ...

It is a very good sound card for a good price. 16 entries c cool all the same.

Go quickly ASIO OWN a portable sequencer, and a driver worthy of electronics and it will be a 99%

(I admit to be still very critical of both the Old School and such problems never existed) but here I still waited three months of my frustrations of dpart and am the most biased possible.

Certainly as a person can in the way with 16 entries under 1000 euros, otherwise hummm
Unless presonus treats the software.

Did you find this review helpful?yesno
»
Read the 7 user reviews on the PreSonus FireStudio Tube »