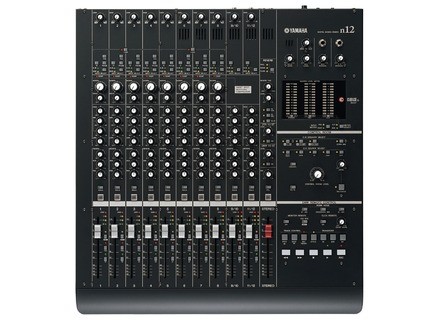 Yamaha n12
5
You will get nothing but low-latency performance with the Yamaha N 12. I have been using this unit for the last year, we have it hear in one of the studio’s on campus. It was used with a Windows 7 system running 64bit. There where no issues with it at all, I didn’t not install it so I am not sure how easy it was to install but I do know that after using in a bunch of different DAW’s it works great in each and everyone of them. The phantom power is switch able and it has solo level control. There is a talk back function with a built in microphone which is pretty important to us in that studio.

You can connect the Yamaha N12 to many different sound sources. It has XLR connectors and TRS jacks in mono. There are also RCA pin jacks, so no matter what audio gear you need to run through it there is a plug for it. I prefer to use the Yamaha N 12 with Cubase most of the time, that is the first program that I have used with it and it worked great with it so I never started using it with anything else.

The Yamaha N12 has MIDI in and out, a foot-switch input and it comes with a version of Cubase. It has 11 faders on it and eight microphone pres. The unit as a whole is well built and I don’t every see it breaking. It is nice and heavy.

The sound quality on the Yamaha N 12 is great, it has a morphing compressor that sounds perfects as well as reverb right on the Yamaha N 12. If you are a Cubase user than this interface is something that you need to seriously invest in. It is not cheap , costing around 1200.00 dollars but it will be well worth it once you buy it. The 8 pre amps and 3 band EQ are worth that price alone. The Yamaha N 12 has set a high bar for interface from this point on!

john chapman's review (This content has been automatically translated from French)

Yamaha n12
5
If you are looking for all in one, analog console, audio and pramps interface is the idal.Qualitprix do not hesitate, there is no better (1150)

All-time the beast is not practical to carry around, especially when you only have a voice made to do, so for mobile is not the most practical!

No problem with the drivers, was working!

A tip if you want to use software other than the supplied Cubase 4: Install the same when, open and: priphrique / configuration of peripherals / VST and VST among outputs, note the name of the routing among I / O has serve you in your software to rename and assign your entries / exits ... You will understand!

I use Nuendo as it is much more complete than cubase. (Mix console, routing, etc ...)

For those who are wondering, there is no difference in sound quality between the two, nor even among any software, the sound quality comes from the conversion of the analog signal converted digital by your sound card! So good converters and good pramps ... This is the basis

The pre amps are pretty good, nice sound color, not a monstrous momentum but the result is very convincing.
The compressors work well on vocals to give the grain, on guitars, bass andthe piano to inflate the level, less useful on a battery, I find (plug for a more convincing!)
The reverbs are very good (but the problem you could not record multiple tracks with, we must re-balance, once registered, the tracks in the console and r-record with reverb, one by one. .. )dropoff window
Eq avoid if you are a deeply wanted to correct a signal,

Very practical studio configuration, routing for headphones and Aux example.
need amp or mixer kegs for the control room and the musician.
I do not have that choice, not because I'm mcontent, but because I galre dplacer for me and a little more expensive, we just have an interface with ADAT gender and pr 410 Audient ASP 008 amps for a little better quality.
Did you find this review helpful?yesno
»

Functionality and configuration quick and easy.
Manual very complete and accurate.
Attention only to the installation of drivers and fw check the compatibility of your firewire card (see on the Yamaha site)

Very successful duo with Cubase. Remains that transport does not work with all sequencers.

I use it for 5 years. This is the best equipment in its class.

In my opinion, Used live or Cubase is the ideal tool home studio.

The audio quality is really excellent and DAW mode operation is very successful.
A bit expensive at first, but it outperforms many audio interfaces.

Shanow's review (This content has been automatically translated from French)

Yamaha n12
4
I was looking for a console espce analog controller to my sequencer, good quality ... and I think that&#39;s what I needed.
I&#39;m not going to Retailer CHARACTERISTICS. As against the number of (12 including 8 XLR) seems to me enough for my use (in home studio) long term. The principle of hybrid sound card / analogue desk is Russian, not just in appearance.

Prcise that I was only two days (over the night between) I&#39;m on it. j&#39;diterais when I&#39;d form an opinion DEFINITIONS. ii they are as Premire impressions.

The drivers for yamaha homeowners (m-lan) and n-series drivers installed fine, no problem, and is fast. It Yadji of updates and goes well. you can even "manager" presets curves compressors! it was really fast and useful!
There is software that gre-m devices connected LAN (which is both a plus for the management of the N12 and less resources to pc).
You plug the power supply, installed it and it&#39;s ready to go (as they say).

-> THE MANUAL! ULTRA is short! (I compare with the 01V at the same time, o is a bible) but honntement, trs Designed well. to give almost want to read it. They think of the little ones who want to start mixing: Some illustrations. They even explained the basics (quite succinctly when Ms. Sample: Difference asymtrique / symtrique) But be careful! it is also translated into FR! is a standard effort from Yamaha. in addition, it is translated ...

Apparently they are drivers for mac too.

Stable drivers yet. Updates available on the site yamahasynth. Latency is good: for 512 buffer, 10 in imput and output 14 ms respectively. I find it really acceptable because: on each slice, there is a compressor (great for testing voice and some instrumental tests), a qualiser (the frequency of medium is adjustable), the reverb ... You could stay until 2 or 3 ms, but hey, recording only if a crack with my laptop.

The VU meters to the number of 3 trs are visible! in the dark, it is convenient.
The quality of the knobs is simply mind-blowing (I could never test a mixer as luxury !!!).

THE useless thing on the N12, which is the logo cubase ... light is thrown on cubase!
standard but the very first time, the name of God. and only with 4.
Besides the function only works with AI4 DAW and version 4 in gnral (pending update).

For tracks in recording, is that fun, but I have not recorded more than 4 tracks at the same time ... So j&#39;diterais also a. I spend the quality of pramp, they really are my sufficient level of demand ... (Class A)

Works well for MIDI (with a test UF8 in Cubase SX3) (1 in + 1 out)
The control room section and remote are perfect and there is the option to register a terrible sikos not playing rhythm with metronome remote rglage volume (phew) and assignable back to the tracks you want. No latency when using these functions with AI4.

It also has a micro Intgr to communicate in return and it&#39;s great (a lot of gain and breath, but who cares in this case)

Therefore résumé in home studio, I find it very practical. we need it, a pc and microphones (or not), possibly a Mackie Control or equivalent and one is happy. The quality recording with just her, it&#39;s bttn because of its good starters, compressors configurable (they are one of simplicity: almost nothing to solve the five preset compressors are accessible by turning the morph, it&#39;s great practice for not wasting time, and time recording, I have enough, people are always presss) and its reverb me pate ... (Even if it only has three options: hall, room, flat)

on the other hand, in terms of Cubase AI 4 ....... for now, I do not like. I do not like the big limitations such vst only two per project. I wonder if the same audio engine is not limited and it is plausible. I remain with my old cubase. in addition to the price of the update to Cubase 4 is ridiculous standard (like the price of Cubase 4 (about 766 euros) less than 50 euros ...) and it&#39;s not fun ... they lose potential buyers ... BMD is an AI 4, BMD of shit. I dgout and I say, even if I knew she would be limited. They could make an effort ... In addition, the number of boot is small -> You have to enable it on the net! but I do not want to connect my pc to the net! arg! At the same time, it&#39;s not that I bought a l. ..

Otherwise, I am not mistaken about the merchandise, it&#39;s good (but pricey).
If you want dtails, contact me.

Did you find this review helpful?yesno
»
Read the 6 user reviews on the Yamaha n12 »

Yamaha n12 manuals and other files