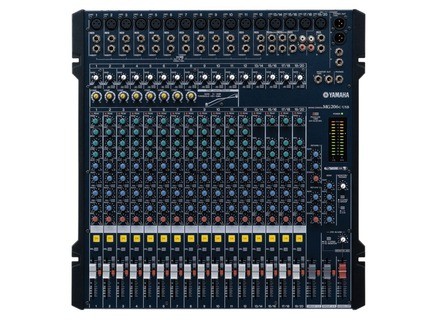 MG206C-USB, FireWire/USB/mLan Mixer from Yamaha in the MG USB series.

8 compressors in the mono channels

Insert in the 12 first channels

Very easy to use. Very good user's manual, I read it only once and haven't had the need to open it anymore.

Very clean sounding preamps. Their sound is not exceptional but quite ok. I can't complain! At 80% of the gain I noticed some noise which gets louder at maximum gain (it's obvious that the preamps are not conceived for such settings and it's a budget mixer anyways) but the sound is quite ok.

The EQ is also good. It has very effective controls. The high frequency filter adds too much hiss but I rarely use the EQ because I use it almost only in my home studio.

The sound is good and clean... I'll say that again: the sound is very good. I've used more expensive Yamaha models for rehearsals and I can say this small mixer offers a good performance.

The AD converter is not so good for recording applications. It's not that important but don't be surprised if you have some depth and warmth loss between live and recorded sound. I think that's its main weakness. I will update this review after recording the analog signal with a better sound card so that I can really assess the audio quality loss.

I've owned it for almost a year and I can't complain, it's a good device.

Most of all I like that it's convenient and reliable.

I had the opportunity to try out other Yamaha mixers and they were either disappointing or too expensive for me. The USB capability of this mixer is a good compromise.

Very good value for money. I don't regret having bought it.

Would I buy it again?

I'll get back to you as soon as I test a better quality sound card.
Did you find this review helpful?yesno
»

tyler core's review (This content has been automatically translated from French)

- The effects section is it intgre? ...
No, but I think all fawns effects Intgr the consoles are often quite bland.

This console is really trs complte and easy to use.
The manual is accessible and trs provides only the strict ncessaire: some say it's advice on using a few rules for the bases. As against it is quite clear on the technical specifications and does not seem to find a weakness to hide as many manufacturer (usually, other prfrent not go into too much dtails).

In fact, I Tlcharger the manual before buying it for it to be our answer sr my needs (notement page synopsis on the console).

I advise all INTERESTED possibly to do the same, which will be much clearer than looking at any résumé by its CHARACTERISTICS ...

FYI I just receive it (there are only 3 hours).

I tested quickly:
The sound is clean and neutral trs, almost a little too, but the characters at a price much lev.
Level breath, trs is correct, much better than the Behringer & co ...
The micro pramp remain clean enough share in the last 2-3 millimtres race of winning. But even better is when my buddy pramps M-Audio (which a lot of people say pretty clean ... everything is relative, especially compared to the price).

The qualisation is effective and does not add Gnant breath (very lightweight). I test on a snare drum with a harmonic rule too and 5s, I was able to rectify the semi SETTING THE mdium paramtrique (gender-4dB @ 250Hz). Say anything, it's pretty prcis.

The routing switches are trs discreet, no clicks that make it difficult to monitors and especially our ears (personal, I have not heard a sound by pressing it. And also to say how it clean, and well, I thought that no same slice n'tait active, so the breath is not felt.

On small compressors in the first 8 channels, I really thought c'tait gadgets, and finally, even if I would not venture at this time, make a sound recording to record with, I ' admits that they are really discrete trs, free of noise as to whether they are not dcoration.
Well no! This little Designed Systm is relatively well because no matter rglage the sound is not pumped. The levels are very well trs prservs without even the diffrence in size, the more you compress, the more its light appears but Manir cohrente.
Everyone will say it's the same base of the compressor, but if you have less Submitted sensation of lower volume levels on strong to help pass the weak. It plays like a volume knob that CONTRL that sounds less strong progressive Manir trs. It's pretty subtle, but if you're careful, it's obvious.

The only point that I ESG is that the gain of pramps microphone is a little too hard even to a minimum (16 dB) and hit with a condenser microphone or without attnuateur -10 - 20dB snare a fast clip trs trs ds not play that jazz ...

We can not have everything ... even if I would have found more useful than a compressor ...

As I said, I just have it, but I'm used to test the hardware. In fact I produced and I rpar but in a price range more leve ...

I bought it because I needed a console to a recording and I could not wait for a bigger machine.
I use a lot of pramp rack so the carctre and color I am quip. I had to console a reliable, fairly transparent, with little background noise and above all a price not too high right now.

In my exprience APRS, Yamaha dfendbien in these areas, and I think given the price diffrence with Mackie, we gain; not really about noise, but one less console mackie 2000, when the knobs are a novelty uss not take the blow to the head of the repair is not that (much like the stereo and PC today).
Yamaha MG206 is the same thing as Likelihood almost all consoles less than a few thousand euros for homestudio, but left to buy disposable, as far as is reasonably priced and good.

That said, it does not Camelott, nor Mackie.
For a group that wants to register with some good microphones, and a bit of experience, the tour is played.

I complterai this post a few times to confirm what it is worth, but I think Yamaha will rhausser qualitprix the report in this price range, as one does in others.

Loud Wizard's review (This content has been automatically translated from French)

Very accesible, easy to use, manual very well done, I did read that faith and I did not need to reopen.

The preamps are very propre.ça not break bricks, but it is quite correct, I never had me a blast that appears plaindre.tres Légé a 80% gain and become so if they are pushed to catch (but it's not for that either is an entry-level table) but it holds water.

the equalo is also very correct when you turn the knob we feel that it works, just the sharp correction that brings too many blows to my taste, but at mm temp, I do very rarely used for EQ I use it almost almost home studio.

direct sound and good, clean, and sorry if I repeat, it is very correcte.Pour have used in the 400euro Yamaha in rehearsal studios (on different L Acoustic) Bin this little beast is doing more as well.

small problem is the A / D converter that fishing a little ... cardre in a recovery for a kidney enregistrement.encore a catastrophic faith I can assure you, you just do not have to be outdone by a loss of depth and warmth of the sound between the time of listening and monitoring via replay a track in the faith séquenceur.Je think it's his main point faible.Je make a small editorial when I test a record reprnant the ANA reported by another higher-end sound card to get an idea the signal degradation during processing.

I have for almost 1year and I'm not complaining, it's really a good animal.

What I like is its effectiveness, it is exactly where you would expect, never surprises.

I had to test some OCASI table of the same brand qoit These and disappointing night out of my moyen.L acquisition audio via usb this table is a good compromise, it's clean.

RAPORT very good value for money is undeniable. New pay 666euro I do not regret my investment.

again this choice?
when I see a test recording with a better quality sound card.