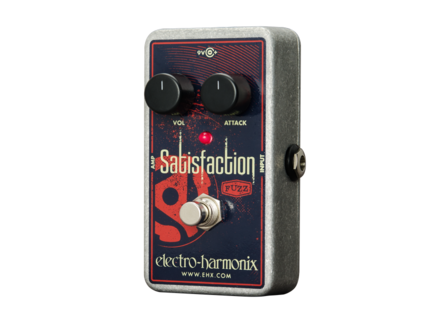 View all offers for Electro-Harmonix Satisfaction »

peterfuzz's review (This content has been automatically translated from French)" they explain to me!"

an attack button that makes the animal more aggressive
if a volume
what else?

tested on two amp:
-A small marshall vintage lamp quite grainy and crunchy, slightly powerful: the pedal boosts without much personality: a thick overdrive, which takes a bit of a 60's color when you put the cleat
On a large-classical: VOX AC 30: The pedal has a much more personal tone: ultra sharp medium, the distortion is skinny and earwig, the stamp is there, but at what price! - Ironing in the clear, there is a wider sound ...

it really depends on the amp it seems, and it's amazing (compared to a Fuzz Face that was greasy and the same stamp on both amps tested)
one could say that this pedal caricature the sound of the amp itself!
fat in Marshall, say a little more, or ultra piercing Vox, but drastically reduces the spectrum ...

Published on 01/25/14
We visited the Electro-Harmonix booth at NAMM 2014 to listen to a few new effect pedals for guitar.

See all 42 photos of Electro-Harmonix Satisfaction »

View all 5 videos of Electro-Harmonix Satisfaction »

Electro-Harmonix Satisfaction manuals and other files