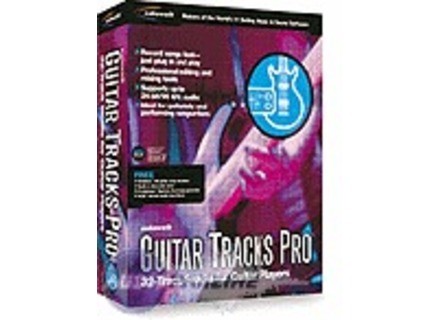 Cakewalk Guitar Tracks Pro
4
I bought this through Cakewalk direct. $99 a good deal.

I tried Cubasis and it was very confusing. I moved over to Guitar Tracks 2 but the 8 tracks were not enough for me. So then I upgraded to guitar Tracks Pro it has a total of 32 tracks. Its also real easy to use and learn. I have recorded one full-length CD with it. And now I am working on my second CD. Songwriting is easy with this program. www.icaboyd.com

The only thing I think they need to add to this is the ability to change tempos withing a song. You cant have tempo mappings like Cubase etc. But if they added this... GT Pro would be perfect!

Very well structured, easy to use.

Its an excellent program for someone who does not like all the complexities of Cubase, Sonar etc. Very simple.

Cakewalk Guitar Tracks Pro
4
I bought the software online for $95 including shipping.

I wanted software that was as easy to use as a 4 or 8 track tape recorder, with a good, well written manual.

Guitar tracks pro is exactly that. The mix view looks like an 8 track (although up to 48 tracks available). The manual is extremely well written.

The software interface takes a day or two to get used to, but with about 20 hours of experimentation, you can pick up all of what you will ever need from the manual.

The software has great EQ, which allows you to set up to four parametric eq points. It also has a very good compressor.

All in all, very impressive software for the price. Also included is both email and phone software support.

The included fruityloops software, used for creating drum loops, looks a little mysterious at first, but if you print off the manual, you'll find it is a very cool chunk of software for creating or more likely customizing supplied drum loops.


Going back to edit an effect is disconcerting, because it doesn't tell you the which saved effect name your editing. It sounds a little weird, but you'll soon know what I'm talking about. Probably the only glaring oversight in the software.

Also, the software does not support 24 bit using Windows XP. I couldn't push it past 16 bit, because it doesnt really support Windows XP WDM drivers. What a pity, considering the package says it supports both XP and 24 bit.

Cakewalk told me that Home Studio 2002 and Sonar support 24 bit using XP, so you'd have to upgrade to those pricier and more complicated software packages if you want the extra sound quality.

The software is pretty stable. But I'd recommend you need a second drive, preferably a 7200 RPM unit (40 gig Maxtor's are pretty cheap these days) to write your audio files to.

You need the 2nd drive so that running the software on your system drive doesnt fight with trying to work with 8-10 tracks worth of sound files being processed at the same time.

Make sure you configure the software to write your audio file to the 2nd drive, and keep only your audio file and nothing else on it. Defrag your disk often, and don't open alot of other programs while using this program. And save your stuff and maybe shut down and reboot for every couple of hours use.

Audio software recording is very demanding on a PC. So, its okay to expect the software to become unstable after a couple of hours use, or if you really have to open your email, browse the web, and who knows what else while using this program.

Best to start your computer, open no other programs, use guitar tracks pro, save your files after recording each track, and maybe shut down and reboot after a couple hours use. Simple.

Its a very good product for the price.

Be willing to put about 20 hours of manual reading and experimentation, if you really want to learn what the product can do.

I use it to record maybe 10 tracks of guitar, bass, vocals, and some stereo drum loops. I put lots of effects on like reverb, compression, EQ. I use the two effects buses to group common effects like reverb and compression, as theres a limit to the number of effects.

Basically, thumbs up, but forget 24 bit recording on XP (you probably won't go there anyway).