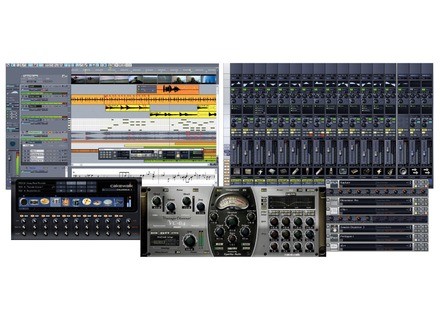 Matt Trakker's review (This content has been automatically translated from French)

Cakewalk Sonar 6 Studio edition
5
Damn but I following the only one having this software?

Well it's two or three months so I put a notice:
software installation is very easy.
I am using a packard bell PC with 3GHz proc and 1.5 ram. I have windows SP2 and a USB HDD 250 GB My sound card is a PRESONUS FIREPOD.
The manual is huge, but in German so useless. (I also bought MUSIKSTORE ...), but simply using the software.

The software works well, sometimes it crashes because my USB HDD and my PC is not for computer music.
I work with 25ms latency, on projects electros 16 to 20 tracks. I do not have VST, I use the effects of the multi-band sonar ansi on the master track.

Frankly it's a good software, I tried the demo version of SONAR 6 PE, and well apart from the plug-in editing the voice SE version is more than enough. the menus are well done, the console is well designed, you can change the colors of a lot of parameters, not bad at all. I also tried CUBASE LE that came with the sound card, but knowing that I have sonar I'm not too bent over.

I use sonar only for recording and mixing. For the components in MIDI YAMAHA RS7000 I have that does this very well. And the sounds I have a VIRUS not need vst.

I paid 199 euors musikstore home, so there is no contest is an excellent price / quality ratio. I wanted to buy version 7 but 6 is enough for me and also I see that many owners are in the galley sonar 7 ...

Morality, no need to purchase the EP if you're just a passionate and not a pro!
Did you find this review helpful?yesno
»