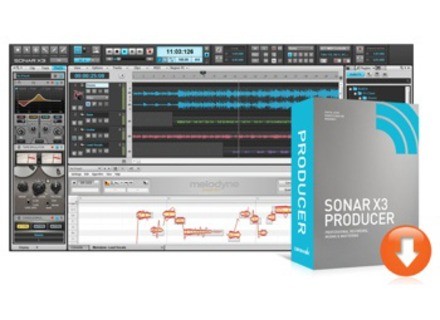 Stellar Sequel The year has just begun and, as usual, the new Sonar has arrived with a bunch of new features on the rack. Read more…

SONAR X3 Producer leaves other DAWs in the dust with industry leading features. Edit and correct vocals like a pro with Melodyne Essential. Create the most realistic and authentic drums sounds with the full version of XLN Audio Addictive Drums. Get that epic, pro-sound that has defined the last 25 years of recording with the ProChannel - now with the QuadCurve EQ Zoom and analyzer for the ultimate precision. Get that vintage analog sound with the new ProChannel Tape Emulator and the Console Emulator. And it doesn’t stop there with a new mixing suite powered by the Nomad Factory Blue Tubes FX and BlueVerb, Tone2 BiFilter 2, AAS Lounge Lizard Session, AAS Strum Acoustic Session, Dimension Pro, Rapture, and much more.

Cakewalk Sonar X3 Producer
5
Installation was nice and smooth, no problem at all.

I am using this DAW from very first version - Cakewalk for DOS. Working on Windows 8, i7, 16Gb - no problem at all.

I was trying to compare to others and version Sonar X3 is absolutely TOP.

There was a little difficulty downloading it, but only because the file size is so large. My download was happening over 15mbps internet and it took me two tries before I had it successfully downloaded. It seems there is a sort of online signature that happens with your download and if it times out on one of the parts, the other parts will not recognize it.

You have the option of purchasing physical copies of the disk, so if you are worried about the download that may be a better option for you.

I use it with Windows 8 running on a Dell Inspiron 660 with Intel Core i3 processor. After getting it installed, setup was easy. It instantly recognized that I had plugins and projects in Sonar 8.5 before it, and carried them all over to the new Sonar X3 formats for me.

The software works flawlessly. I had a few problems with Sonar 8.5 which is why I was so hesitant to upgrade to the other versions that were released throughout the years. X3 looked like they had finally fixed every bug so I went for it, and I don't regret it one bit.

The way it is arranged is unique. Everything can be kept in its own window, or as Cakewalk calls them "Views." You open a view and get a separate window for whichever item you are using. You can then click and drag the window to any space in the workstation and dock it to certain points of contact. This allows for lots of customization to match your own particular needs and interests. For example, if you don't ever use VST synth plugins, you can close that window and create a template where it will never pop up again. Do you do constant fine tuning to your EQ as you work? Make a start-up template that keeps your favorite EQ plugins close at hand in their own section.

I have a special template for the final mix-down where I have a window open on a second computer monitor above my mixing console. This window holds the "Console" view which is the virtual mixer. This allows me to get away from all of the distractions and use my ears to mix, double checking on a screen that I am adjusting the correct parameters.

Everything is labelled in a simple, easy to understand manner. Navigating the different windows couldn't be easier, and I haven't been confused about anything in it. There is plenty of color-coding and text help in every window so that you don't get lost in the hundreds of features provided.

X3 Producer comes with a library of plugins that will cover just about every need you can think of. There are software instruments such as Dimension Pro, Rapture, and Addictive Drums 2, Audio effects such as EQ, Compressor, Limiter, and a variety of effects from Nomad Factory, and even CD Burning capabilities.

There are several ways to edit midi data. You can use a sheet music notation window, piano roll, or a step sequencer. This is nice because sometimes one way will inspire me over the other on a particular day, and then on another I need to get precise and edit sheet music for an orchestra.

Another nice addition is the support for VST3. Plugins have been released in the past few years that take advantage of this new format and it's great that I can use them in Sonar.

A lite version of Melodyne called "Melodyne Essentials" is included and I have found this to be very useful for editing vocal passages and cleaning up missed notes. I was a little disappointed that they used it to replace Roland's V-Vocal processor. Melodyne is better at certain things such as pitch and rhythm correction, but V-Vocal was nice to use for more creative vocal processing. Luckily, if you had an older version of Sonar that included V-Vocal X3 will carry over the plugin to the new version.

There is a view called "Matrix View" that has been around since the days of Sonar 8, but has been improved upon in this new version. Matrix View allows you to click and drag audio and midi files straight from their tracks in the project (or from elsewhere on your hard-drive) and loop them. This is the answer to software like Ableton Live and FL Studio that focus on in-depth loop creation. It works for me as an inspirational composition tool. I can make a drum groove and keep it looping while I add and subtract other parts of the song to see how I want it to line up. This view is also incredibly useful for live DJ and Electronic Dance work. You can play around with alternative parts of your set on the spot as you feel the energy level of the venue.

Ease of use. I have never used a DAW that made more since to me and complimented my workflow so well. I record real instruments and work with midi data on a regular basis, and X3 Producer allows me to do anything I can imagine with both.

I think there must be a better way to manage a download that large than the way Cakewalk does. It took a very long time and had a bit of trouble. In the end it worked but I think they could make it more simple.

I have tried Ableton Live, FL Studio, Cubase, Logic Pro, Garageband, Reaper, Studio One, and Protools. Nothing has worked as well for me as Sonar X3 has. Unless Cakewalk discontinues their software support and close their business, I will remain a Sonar user for life.

If you like, Cakewalk offers a free demo version of Sonar X3 on their website so that you can try it out for yourself. Give it a go and make sure to play with customizing the windows to see if you find something you like.

edit: I corrected the Sonar parameters, buffersizehdd ... and as a consequence it now works only in asio, no wdm for me, it's a pity since it has less latency with wdm than with asio
But it works

All in all, it's not bad, we'll see how it responds in terms of reliability and, especially, stability
I'll keep on testing it
Did you find this review helpful?yesno
»

madchap's review (This content has been automatically translated from French)" a little heavy but very good!"

Cakewalk Sonar X3 Producer
4
RAS. I installed the DAW on the other hand. No effect or instrument pack.

i7 / 8Gb. It runs well. The interface has not changed since X1 so that side of the RAS.
There were no changes bcp against the ProChannel rating (Adding reverb plugins, compressor etc etc, and especially they added good, namely the Softube.
It becomes very easy to mix in Sonar, almost everything is already in the ProChannel. The only "problem" is that we do not really have a choice of the plugin in question ... it's Softube or Overloud (breverb2 and TH2 for example). But as they are very good plugins that's not really a problem.

I use Sonar since there but I'm really income from X1. X3 does not change a thing in itself if one already has his favorite plugins. on the other hand for someone who has nothing that is a very good investment because even if some plugins are more light than the original release (it will not either self-compete!) He still there even what to do and especially what are plugins m # $% e are provided, but BON plugins with whom we really just do something good.
So Sonar, which is exclusively under windows, is a good DAW which, if it shows a higher rate are others, however, offers good tools for work and a pleasant and fairly intuitive interface (compared to what he did before !!). It requires some learning time but the game is worth the candle.
Did you find this review helpful?yesno
»

Listen to the 12 audio files about Cakewalk Sonar X3 Producer »