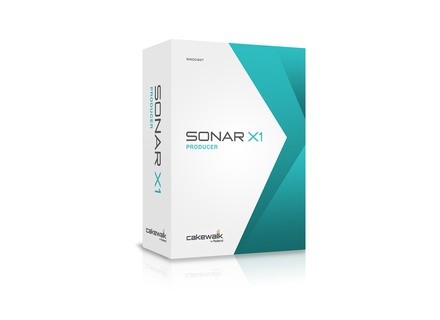 Cakewalk Sonar X1 Producer
5
Cakewalk's Sonar X1 is their latest version of their popular DAW for the PC platform. I am reviewing the Producer version, which includes extra features, such as more built-in plugins, effects, and instruments. These include ProChannel, Session Drummer 3, Dimension Pro, Mastering Effects, Channel Strip Effects, TruePianos, and Producer Effects. The DAW, overall, features many of the things you would expect from a DAW. Unfortunately, it is not designed to work on Mac systems, which is a major letdown. There is a way to run SONAR on a Mac machine using a modified boot, but it is not supported and it is likely buggy, with many loose ends.

I've been using SONAR for several years, and each incremental version gets better, without sacrificing any compatibility or drastic changes to the graphic interface, so upgrading is never a hassle. Cakewalk regularly puts out updates to their software as well, as it is definitely still dominant and current (at least in the PC world). It can use both DirectX plugins as well as VST, and the VST plugin loader is very quick and automatic. DirectX plugins was a format that Cakewalk pushed for many years, but they have decided to go away from it, as the newer versions of their instruments, Rapture and Dimension Pro, no longer fully support the platform. Nonetheless, the software is still compatible with DirectX. It cannot load RTAS, as that is reserved for Avid's Pro Tools.

SONAR X1 fully supports multi-core and 64-bit Windows operating systems, as it is one of the few DAW's that run in 64-bits and can use 64-bit plugins. This is essential if you are working with larger samples, particularly with heavyweight samplers that uses hundreds of megabytes of samples per instrument.

Overall, I would recommend Cakewalk's Sonar X1 (Producer Edition) to any home or professional studio that works exclusively in the PC operating systems. This may be a rarity in many higher end studios, which like to work in Mac's, but it is a great DAW nonetheless.
Did you find this review helpful?yesno
»

Cakewalk Sonar X1 Producer
5
no problem, you just note that the Producer version is a bit "heavy"
Otherwise, I use it in compatibility with Echo Gina 3G card and I admit to not respect the rglages prconiss cakewalk by echo and audio for better stabilitbr /> The grip is quite clear, we must say that this app is really intuitive

reviewed upwards (in ram) for the occasion, I turned up with sonar 3 l and what I was correct.
with better software must follow has, it's pretty normal

a year of use bientt!
Sonar 3 used for 5, 6 years old ??? I know more
Better than Cubase or ProTools for my taste the best known and rpandus
It is mostly incredibly pleasant and efficient than version 3 that I know well.
I'm not talking just before the other narratives, even though I know a little cubase I do not like.
It is all terribly simple and ergonomic case not to mention his performance - there is no picture!
the most is that it is not overpriced and pretty dowry vst to departure (v producer)
Repeat this choice? without hsiter one second
Did you find this review helpful?yesno
»

Cakewalk Sonar X1 Producer
5
No worries. Is installed, apply the patches and rolls.

Cakewalk Sonar X1 Producer
4
Bought online, so it must be a beautiful and good connection to download 15GB.

So hard to download, easy to install, difficult to configure because the tool is very rich. But I'm not complaining, if I had to choose the studio version.

cf. my profile for the PC config.
This works fine, except sometimes a few crashes which I do not know if I should attribute to the soft or the audio card.
Most importantly, BitBridge (plug allowing in theory use 32-bit VST) software crashes when exporting. Hence, a requirement to bounce audio tracks VST concerned then delete the VST before export, and then, if you want to rework must import the VST, the reassign, recall the settings ...

I use Sonar since 2004, this version since 2011.
Previously I used only MIDI sequencer (bigboss, Cubase 2.5). Since then I have not mishandled Digital Performer (Mac only while Sonar is PC only).

Value / pretty unbeatable prices. I chose this because at the time it was 200 euros cheaper than its competitors.
Note the upgrade policy Cakewalk: possessor of version 3 (X1 corresponding to the 10), I paid 200 euros instead of 450.
I would do this choice for the same reasons (price), and because we have better things to do in life that compare full of this kind of software to choose his favorite.

Did you find this review helpful?yesno
»
Read the 9 user reviews on the Cakewalk Sonar X1 Producer »