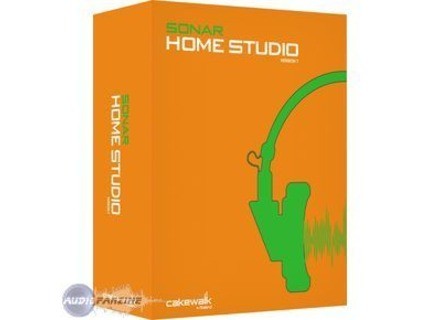 MrMarcH's review (This content has been automatically translated from French)

Cakewalk Sonar Home Studio 7
3
Installation is no problem it?
Installation easier for the XL version 2 DVD
It INSRE in the drive and basically expected.
Gnrale configuration is easy?
The Audio MIDI Setup is fairly simple.
Difficult to find the audio drivers the most stable the first time.
Between ASIO, MME and WDM dpend all of your machine.

Making more cabbage if you want to use a surface CONTRL
Technology Act is not vraimant intuitive.
If you're lucky there may not be a default preset.

The manual is clear and sufficient? ...
A black dot. There are three tutorials that Courrent APRS and the rest good luck!

What is the configuration of your computer? (Motherboard / CPU / Ram / Disk / sound card ..)
Notebook Core 2 Duo with 4GB of ram

The software works he correctly on this configuration?
Some crashes audio engine random image fawn (rare) that seems to come from poor management of dual-core as a overhead in the calculations of the machine.

Some Bugs bizare. Yesterday all of my automation project was because I DCAL lment a move in a track that she had no automation. A shame! In short, I am good at everything again.

What performance? (If quantifiable)
Test with dozens of audio tracks, as many buses, and effects across a couple of virtual instruments.
We arrive to work without much problem even without Gler tracks

How long have you use it?
6 months

What is the particular feature you like best and least?
<img class="smiley" src="https://fr.audiofanzine.com/images/audiofanzine/interface/smileys/icon_biggrin.gif" alt="biggrin" /> The terrain is fairly soft and can do what you want, the audio editing laz musical composition.
The bundle of tools provided with the XL version justifies the cart in price between the two versions and can do a lot of cool stuff.

The new interface APRS a little running-in phase actually simplifies the use of the software.

<img class="smiley" src="https://fr.audiofanzine.com/images/audiofanzine/interface/smileys/icon_sad.gif" alt="sad" /> For some points against it frustrating though that show quickly the limits of this version:
<ul>

Incomplte automation. For example it can automate the 'Mute' of a track but not a bus.

The bundle of audio effects would MRIT DTRE a little more balance. Three reverbs, equalizers by 2 against a poor noise gate / compressor and no flanger ...

Can not make the side chain with appropriate plugins.

Unable to save the diposition of windows when reopening a project.

Can be cut in half by an audio object against it can not pick both.

In short some frustrations vis vis this logiel, which I think should be voluntary.
And yes ilm necessary that Mr. sells Cakewalk Sonar suprieures versions.
Have you tried many other models before acqurir?
Traktion, Samplitude LE, Energy XT.

How do you report qualitprix?
The XL version if you look at the bundle effects / instruments INTERESTED seems more for those who want to engage in the computer music.
on the other hand, ds that we start a little grater. Quickly found the limits of this version of the range.

Exprience with, you will do again this choice? ...
I performed the ugrade version 6 Version 7XL. Quite again I would pass directly Sonar Studio.

the bubble's review (This content has been automatically translated from French)

Cakewalk Sonar Home Studio 7
4
installation under win 7 is zero .... have to go into safe mode
no worries on xp and I do not know vista
the manual is clear that damage is done for all versions because there are functions that do not exist in this version of sonar7

2.5gh athlon 64 dual core, 300 gb hdd 160 more, 4gb of ram, windows 7, Tascam FireOne. no worries performance, a dozen virtual instruments including those run without problem and integrates sounds free (excellents!) of EWQL orchestra. the software is stable. I have not had any problem of incompatibility. the audio engine is good quality. on the other hand, there are not many VST plug-ins at the outcome, just the basic what. at the same time, there are very good things in freeware as these old "classic effects" (classic master limited etc). I want to say that the FireOne running with win Sonar 7, but not 7 win him even, I think it's an incompatibility of the FireOne with dx 11 and dx10

I use it for two weeks so it's not very objective. It is inexpensive, runs well. before, I tried cubase lite, sx1, 2 and 3, Ableton Live Lite 6 and 6 in the demo, cubase vst 32.
+ Good price quality ratio
+ No need for a configuration of gross
+ Clear partition editor (at least more than in cubase)
+ Export noon, audio