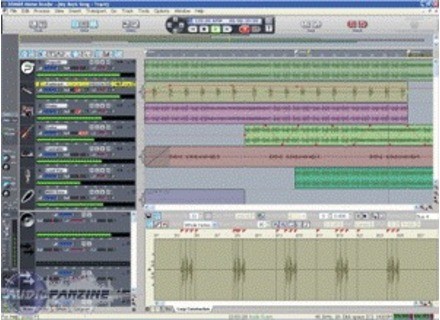 Cakewalk Sonar Home Studio 4
2
I hate the sound editor and the loop functions but the record functions are great. Its very easy to understand and has great tutorials. Its straight foward once you get used to it.

Its easy to use once you get used to it. I had to read the tutorials which is rare for me on most software programs.

Its a DAW it gives what u put into it

It has crashed on me several times. I dont use with it no more because of that.

Its a cool little program but after months of use I wouldnt put all my gold into this pot. Its good but Ive seen other software do me much better.

Originally posted on FutureProducers.com
Posted by: Xabiton ( 4-, 2006)
Did you find this review helpful?yesno
»

Kemyrry's review (This content has been automatically translated from French)

Cakewalk Sonar Home Studio 4
5
Atttention to the version you buy, some stores sell the English version and another version euro (French, Spanish, and German anlais). Please ask before you buy.
Soucis.Un installation without serial number is given, the software will work only 30 days, if you do not make the inscription at the site of manufacturer or phone for a validation number définitive.Manuel (lightweight) paper provided online help (French) is available for more détails.Configuration simpliste.Utilisation DXI and configuration of the reach of all.
Sonar Man Studio 4 includes a utility to the utuliser VST.J 've just tried the virtual instruments provided (Dreamstation, SFZ and VSC), but I do not use the virtual, I am connected to the bottom expander and there, not problem with my D Synthesizer Roland JUNO my expander ROLAND XV 2020 YAMAHA MU128 sound module and my. It turns hard.

IT CAN BE USED since I am a regular one semaine.Je products cakewalk, so no problems with interfaces.J 'CUBASE SE3've tried, but here do not at all hooked, and interface configuration galleys and here Pantera on my portable.
For 99 euros, I have a super audio sequencer afternoon. Easy to use.
And I would do if the choice to do it again.
Did you find this review helpful?yesno
»

I struggled a lot to search for software audio / MIDI enough light to enter netbook my PC but have a minimum performance specifications to support and which is simple , we have not lost in the maze of information - it's bad enough to find themselves in the maze of MIDI. I tried a good fifteen, different versions of the same software included, and it is ceului that best fits my application.

This is one of the lightest to select the MIDI interface on each track individually. And besides, it takes the synths.

The only problem is that when you create an envelope of MIDI controller, you can only create a controller containing a number among those proposed, and justly, not all controllers are proposed, only those standards GM - GS - XG are, argl, dommââââge! Well, to circumvent the problem, just use a control surface (like my Peavey PC1600x, for example) that is programmed to assign to the knobs or faders numbers appropriate controller. This registers the movements of the knobs on synths, for example, but not modify them then aaaargl! And the pro version of this software, Sonar 4 Producer Edition also does not propose that the controller numbers GM - GS and XG ...

Another problem: I can not program the selection of sounds outside banks GM / GS / XG ...

It is impeccable, aside from my old Toshiba NB100 netbook. Planted where there very often. But now that I have an Asus EEE PC 1015 PE, it's going much better ^ ^

It fits perfectly in my netebook whose power is limited: it is essentially ^ ^ &% & %&%&%
Did you find this review helpful?yesno
»