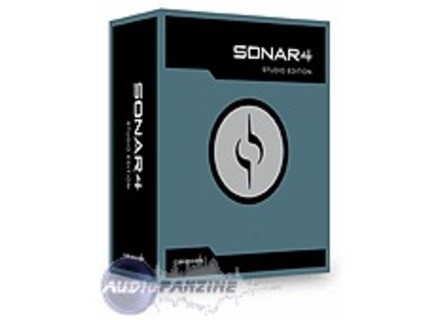 Cakewalk Sonar 4 Studio Edition
4
Installing Cakewalk Sonar 4 Studio Edition was quick and easy. When I was originally looking to get a digital audio workspace like this one, I decided to try a few and see which one I liked best. Sonar had no compatibility issues with my machine and the general configuration and interface of the software is user friendly and easy to follow. The manual is thorough and helpful when learning how to use this software.

I was running Cakewalk Sonar 4 on a PC Hewlett Packard lap top that had a 3 Ghz processor and 2 GB of RAM. I was able to run and record a good number of tracks at once - I believe the most I ever needed to record at once with this was eight, and I had no problems doing it. Running a high number of tracks with effects was stable, although this probably has more to do with the machine you are running it on than the software itself. This being said, if you have a decent computer to run this on, you probably won't have any stability issues.

I first used Cakewalk Sonar 4 Studio Edition about four years ago or so. Like I said before, I got it so I could shoot it out with a few other digital audio workstations, including Pro Tools and Cubase. While I decided that this was my least favorite of the three, it is still a powerful piece of software that can do most of what any other digital sequencer can do. The interface is clear and user friendly, but sometimes lacks in the in depths features that Pro Tools or Cubase SX has. The price is reasonable, and unlike Pro Tools you won't have to buy a separate audio interface, which is a huge plus for those who already own an audio interface. All in all, I would recommend those looking into getting a digital sequencer to look into a few of them that spark your interest and choose what works best for your needs!
Did you find this review helpful?yesno
»