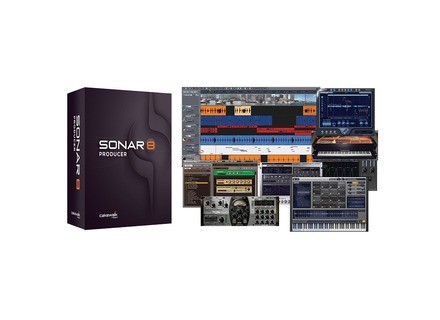 Cakewalk Sonar 8.5 Producer Edition
4
Cakewalk's SONAR. It is immediately important to note that SONAR X1 is not actually different from this version, Cakewalk SONAR 8.5 producer edition, and therefore, it is especially important to note that this program simply flows differently than X1. Unfortunately, that flow in X1 is entirely worth it, because trying to use SONAR 8.5 Producer Edition is not exactly what one would call enjoyable if you have never tried a DAW before. What is nice, however, is the fact that Cakewalk crammed so many things onto the main screen, that once everything is actually set up, the program can run extremely quickly and intuitively. I do admit I may have a slight bias, because I prefer more modern programs with a more flowy interface, rather than a giant smorgasbord of options all yelling at me and telling me to pick them. It is honestly a complete toss up, whether these programs appeal to certain users.

What is nice about SONAR though, is that it is incredibly comprehensive. It runs incredibly lightly, and does not attack my computer like certain programs like Steinberg's Cubase does. In the end, many of the included plug ins to this program are far superior sounding to many of the included vst plug ins to any of the other digital audio workstations. What ends up happening is that this program becomes the Logic of the PC, since SONAR only runs on Windows systems. It has a comprehensive suite of virtual instruments, and its plug ins rival many commercial grade plug in suites. In the end, the only thing I can think of to take off that is that very potential lack of ease with which a person may use it. But again, it is quite a toss up.

In the end, SONAR is a very comprehensive suite that one really cannot know from a review whether it suits them or not. The truth is, I cannot really give any input on how this program flows, and you must find the program that works the best for you.
Did you find this review helpful?yesno
»